20 Questions for the City State of the Invincible Overlord 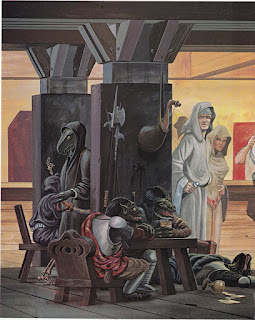 1. What is the deal with my cleric's religion?
If they worship one of the common gods in the City State then they belong to one of the following temples (shown with their associated domains):

Also popular is Mitra, though his nearest temple is in Modron and not in the City State itself. Other temples, such as the Temple of the Gargoyle, the Temple of Pegana, and the Hellbridge Temple are too mysterious and spooky for players to be part of at the start.

2. Where can we go to buy standard equipment? There are shops throughout the City State though few that sell all of the standard equipment in one place. Shopping in my game is usually done during downtime to avoid tedium. Extremely special items may require playing out though.

3. Where can we go to get platemail custom fitted for this monster we befriended?
There is an armorer in the shadow of the Wizard's Keep in the thieves' quarter. There are other smiths found throughout the city.

4.Who is the mightiest wizard in the land?
Most would say Llangwellan the Blue, whose keep was referred to in the answer to the previous question. He rarely leaves his keep and usually his presence is felt in the City State when his Amazon guards go out on errands. A drunkard in the Cutthroat Inn said that he was looking for an apprentice, but that seems unlikely.

However, there are rumors that some votaries of the Hellbridge Temples are even more powerful in the arcane arts. If so, they are good at hiding it.

5. Who is the greatest warrior in the land? Without a doubt the Invincible Overlord himself. He was a peerless fighter even before becoming a demi-god.

6. Who is the richest person in the land?
Likely Psinar of the Outlands, heirophant of the Spider God. The Spider God temple is both dedicated to wealth and acts as a bank for many in the city. Muelash Bahdar the Moneylender may be a close contender, as well as the tax collectors scattered around the city.

The only true rival to Psinar though is likely to be the Overlord himself, or perhaps his vizier Balarnega.

7. Where can we go to get some magical healing?
The temples of Odin, Thoth, and Manannan offer healing at a price. The other temples are too sinister of aspect to even offer it.

8. Where can we go to get cures for the following conditions: poison, disease, curse, level drain, lycanthropy, polymorph, alignment change, death, undeath?
Some of these may be handled by any of the temples in the city; however, healing for some of the more major conditions may only be had at the temple of Mitra in Modron or in other temples in more far off lands.

9. Is there a magic guild my MU belongs to or I can join to get new spells?
No such guild exists but there are a few wizards one could apprentice under within the city. Strangely, there is a club for clerics regardless of alignment. Go figure.

10. Where can I find an alchemist, sage, or other expert NPC?
There is the Sages Guild near the Overlord's palace, the monkish devotees of Thoth who run the School of Ancient Knowledge, and of course the Temple of Thoth the Terrible itself.

11. Where can I hire mercenaries?
There is a mercenaries guild just north of the Tanglebones Tavern.

12. Is there any place on the map where swords are illegal, magic is outlawed, or any other notable hassles from Johnny Law?
Weapons may be peacebonded in some towns, like Modron, but in the City State they are disturbingly rampant. However, just about everything has been illegal at some point or another in the City State and it is often up to the constables which set of laws they want to enforce on a given day.

13. Which way to the nearest tavern?
Part of the conceit of my current two games is that each party is associated with a separate tavern; the Tanglebones Tavern and the Cutthroat Inn. The Tanglebones Tavern is a seedy joint where games of chance are run by trolls. The house usually wins. The Cutthroat Inn is both the cleanest inn in the thieves' quarter and the deadliest.

Those in the Cutthroat Inn have been debating moving to a different inn closer to Regal Street. I think the most likely one to settle on if the do that is the Seahawk Tavern, but who knows.

14. What monsters are terrorizing the countryside sufficiently that if I kill them I will become famous? There's a ghost that haunts Oracle Lake everyone's been talking about recently. Finally defeating the Orcs of the Purple Claw is a big ask but would certainly bring fame. A group of flying snakes with extremely potent venom have been attacking patrols in the Dearthwood. Killing the snakes is unlikely to bring much fame, but it will at least bring the admiration of the Overlord's Light Cavalry.

15. Are there any wars brewing that I could go fight in?
The Overlord is currently on campaign in the west - the land that still belongs to the Tharabian horselords and is debatable between the City State and Viridistan. The Skandiks are always fighting someone, usually each other. Warwick has also taken the Overlord's absence as a chance to raid south, and the pirates of the Hargost and the orcs of the Dearthwood are always itching for a fight.

16. How about gladiatorial arenas with hard-won glory and fabulous cash prizes?
The Cutthroat Inn and Tanglebones Tavern both have pit fights as entertainment, but real gladiators will want to seek out the gladiator school and stadium north of the city walls.

17. Are there any secret societies with sinister agendas I can join and/or fight?
The Hellbridge Temple is both secret and sinister and also seems to have some kind of in with the Overlord no one can quite explain. The Temple of Pegana also has a great deal of rumors surrounding it. There's also the Thieves' Guild, the Assassins Guild, and the Black Lotus whose members infiltrate other organizations to act as spies and assassins for the Overlord.

18. What is there to eat around here?
Each tavern has its own specialty. The Tanglebones Tavern serves "alligator milk" with fried trout while the Cutthroat Inn serves sour ale with biscuits and gravy.

19. Any legendary lost treasures I should be looking for?
The regulars at the Cutthroat Inn overheard a rumor that an ancient pirate fortress, long sunken in the Winedark Sea, has reemerged - presumably containing the loot from the sack of Modron many hundreds of years ago.

20. Where is the nearest dragon or monster with type H treasure?
There are rumors of a dragon in the Dearthwood, and also of stranger monsters that are perhaps even more puissant. A dragon formerly lived in the Majestic Fastness and its hoard is likely there still, though collected by groups of smaller monsters.