Rumors at the Cutthroat Inn

Here are the current hooks available to the online group in my Wilderlands game. Those marked with a * are based on hooks provided in the City State book and those with a ** rely on the dungeon maps that came with that product. 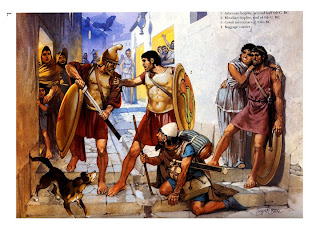 The Missing Tricksters*
Kogmeni Goldtooth, an obviously nervous clerk from the Litigation Trickster’s Guild, is looking for someone who will investigate and stop the abduction of tricksters that seems to be occurring with some regularity on Shady Street. He is willing to offer up 700gp for proof this task has been completed. The more usual patients inform anyone who has heard his offer that rumor is that some obscene cult has a secret temple on Shady Street, and that more than tricksters go missing.

The Goblin Basement**
Long Vran is the owner of the Cutthroat Tavern but is rarely seen inside except to collect money from the lockbox and to straighten out unruly customers. Tonight he sits among the assembled rogues and complains of goblins in his store rooms. What they’re doing outside their reservation after nightfall, he knows not, but he doesn’t like it. He promises a fine debauch for any man willing to slay the goblins and find out their intentions. He adds that such a debauch will be aided by sumptuous powders purchased from distant Karak and the finest houris Naughty Nannies can offer.

The Spider Temple*
A pair of drunken Skandiks in the inn are complaining about an offer they received from a heirophant of the Spider-God. They claim he is hiring fighters and bravos for a task, but that it is so chilling that no man would take him up on his offer. The heirophant, they assert, wants someone to go to an ancient temple in the Dearthwood where lives a half-spawned abomination of their god and slay it.

The Sunken Spire
A legend overheard in the Cutthroat Inn
In time out of Time when the sandaled kings of Orichalca sat upon their rubied thrones and the brother-races of the Altanians and Alryans had yet to leave each other, no city was greater in all the world than Modron. Its purple-sailed vessels plied the waters of the world from the Demon Kingdoms to Klush and Wulin beyond. Many were its treasures and great its science and greater still its water-goddess, Modron.

But time fades all things and Glaukos the Impious, a pirate from Kelnore, came with reavers and sacked the city and stole off with its jewels and idols. Thus was Modron destroyed, for a time, and its treasures lost, hidden in a pirate’s keep.

Many legends tell of the doom of Glaukos, for he did not long outlive the dead city. The goddess Modron, abandoning the ruins of her home, followed him across the Winedark Sea. It waited long beneath the waves for him to become besotted and over-happy with his deeds, for a goddess can wait forever. When, at last, Glaukos set up for himself a keep on an island off the Roglaras, the goddess struck, drowning the keep and all its lucre…

Until now! Sailors of the Overlord say that where once there was no island now a great spire rises out of the ocean, barnacle-wracked and blasted. No one has yet braved entering the strange holes in the side, and those who have sailed close to it at night speak of ghost lights flitting about from within…

The Ghost of the Lake*
A legend overheard in the street between the Cutthroat Inn and the Werelord Tavern
An obviously drunken Altanian, singing in his barbarian accent, stumbles through Slash Street. Those who go outside the Cutthroat Tavern can hear him chant

Those about him make signs to Mitra or Hamarkhis to ward away the spirits of the dead, knowing he sings of an apparition just north of the City State.

The Cool Noble
On the 10th day of the Howling Winds, the party encountered Varius, an Alryan Noble who wanted them to steal an item from the house of Xanatheria Lily-Limb.

The Doom Metal Pyramid
Near the Adderwood (hex 2918) there is a mysterious doom metal pyramid (b/c its black).

Mystery of the Manipulated Mules*
Ion Skamos determined that the mule the purchased for the wagon from the wailing street vendor has been placed under a charm spell by an unknown party. While discussing this in the Cutthroat Inn, a passing Alryan noted that he heard from a friend who knows a guy that the Overlord himself is seeking the aid of ghost chaser in an alley near Wailing Street to rid his stables of phantasms.