We had a near TPK in my FLGS Wilderlands game and decided to take a hiatus at least until the end of October. In the meantime I'm running Nightwick for them. Unlike the Nightwick Regulars (who are still in the month of Elders, 1395), this game's in game month lines up with our current month - i.e. September 1395. Hopefully the coming weeks will show how I plan to reconcile this disparity.

This is another guest post by longtime player in my games, Chris.  You may remember him as Burgell the Gnome and Aslog in the Wilderlands. 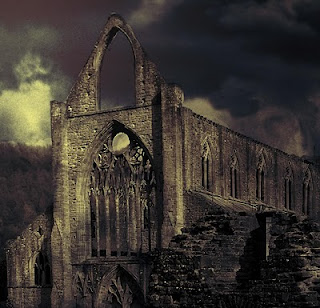 10th September 1394
We're in Nightwick and trapped due to some military happenings. Dame Ysentrude gets taken to a chirch for some walled-in girl to tell her some vision of seals breaking. Some lady in the town complained that her grandmother got killed by a sword brother and wants us to put her to rest. Another lady mentions her father is a wizard and wants to meet anyone going into the abbey.

We go see the lady with the grandmother problems who expresses that she is very poor and cannot offer much. Lame. Then we go to see the wizard in his tower.  Halfdan says he's a terrible wizard and he looks like it. He wants us to find some plants. Okay. So we head, finally, to Nightwick Abbey.

After journeying through woods we burst through to the abbey covered in kudzo and also two bell towers and crumbling ruins without the crumble. There is a cemetery covered in that same kudzu, though not as much. The east tower's doors are smashed open so we enter in. There is also a 10 foot hole with a metal ladder, which the trap door of is cut like meat fillet and half of it is plopped into a corner. Flint unspools rope down into the opening out of mistrust for the ladder and Ginger just goes down the latter.

Flint kicks the door open to reveal a room with a large statue at the end of it. It's a sword brothers statue! Ginger busies herself listening at each door. There's fighting beyond one of the doors. Of course one of the paladins wants to go to that. Thank goodness she is distracted by poking at the statue. Not enough though, and Dame kicks the door open and it breaks like meat. Good. Dame and Flint charge into the room where the battle sounds are coming from. There are a bunch of undead dancing around in combat with themselves. Flint throws a javelin at them and makes them angry!

We fought a bunch of skeletons and Ginger and Flint got hurt. We prevailed over them, eventually, and were rewarded with 2 gold crowns from two lead skeletons. We decided to leave, licking our wounds, back to Nightwick.