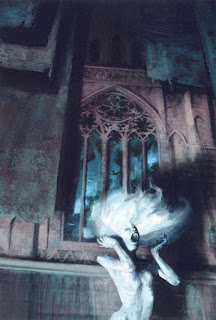 15th of Shocktober
[Aythe] lets us know that the dwarf barbarian that was with us is being held for ransom for 61 gold.* So we go to murder them. Off to the Abbey! A cockerel crows as we break through to the Abbey. Some creatures tell us the same thing as [Aythe], and Anastasia threatens them. One of the mongrelmen had some sass so we pin cushioned him.  The rest gather the barbarian and return him to us. We decide to follow the mongrelmen. We descend into the west tower and go into the left door. Flint licks a pulsing tumor with small creatures in them like tiny old men. After that he hacks at it and rouses it from its slumber.

... And it dies in one hit. We spend some time killing the rest of the tumor mens. We enter another door with the sound of crying behind it in a room full of paper detritus. Adran gets pushed in to check for traps and gets downed immediately by invisible claws.

They are victorious but the abbey changes, separating me from the rest of the party.  I head back to the entrance.  Meanwhile they loot the room that the baddie was in.  They get 2 scrolls (1 w/3 spells the other 1 spell), a chaise lounge, and a golden cross. There are goblins!

They burninate them and some stupid stuff happened that the Abbey rewinded and kept from happening** Friends, everyone.

There are goblins tending a jail!

They prevailed after some pratfalls against the goblins.

We go back to Nightwick, Anastasia leaves.

Monsters Defeated
A Lost Soul, the Anchorite, a bunch of goblins


*The result of a roll on this chart.

** There was some player v player conflict that ended in a maiming and I decided to rewind time to not have things escalate in that manner.  It was a poor kludge.
Posted by Evan at 7:08 AM