When I ran my ill-fated Glorantha Openquest game, I used the Ravaged Ruins tables from the Ready Ref Sheets/The Wilderlands of High Fantasy to populate some hexes of my hex map of Sartar, as is my tradition with all fantasy games.  The results are described below.  Maybe somebody out there can use them.  Maybe I'll use them one day. 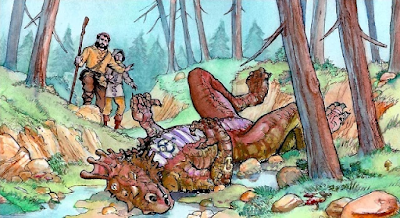 0202 - A group of six tusk riders are trying to figure out how to get two tuskers to drive a chariot they found.  It is not going well.

0314 - Two Sky Bulls hover near a javelin thrust into the ground.  The javelin has the air and movement runes, allowing the wielder to cast skybolt using their own MP.  The ground about the javelin is scorched.

0401 - A dragonewt who was performing a strange ritual here has turned his body into precious stones worth 1600 Lunars. About him are foul smelling chemicals, that are mildly poisonous to the touch - Resilience test or -25% to all actions for 2d6 hours.  If taken back to the tula or sold the dragonewt (now a tailed priest) will come looking for it.

0516 - The broken skeleton of an enormous bird, at least the size of a dream dragon, lies here covered in ashes.

0707 - A stone statue of a noble long forgotten from the Empire of the Wyrms Friends lies tumbled on the ground, covered in dust.  Those who linger too long near it will be attacked by three Ancestor Spirits who will attempt to possess the victim to make them sing a dirge for the noble until their death.

0711 - Ruined Duck village haunted by the undead of Lunars who died destroying it.

0808 - An inhumanly large man with humakti tattoos and gleaming armor stands between two flocks of sheep, one black and one white.  He says the white sheep feed on the truth while the black sheep feed on death. “Speak the truth and both my sheep shall eat. Speak a falsehood and only the black sheep will.”  He will refuse to let anyone pass until they have spoken, and will attack anyone who says a lie, after his white sheep die dramatically.

0904 - A group of 6 ghouls feasts on the remains of a food pedlar and his wares.  If searched the pedlar has 5 lunars on him, but all his food is spoiled.


1003 - A dragonewt stands at a ford in a river demanding a duel to anyone who would cross in halting trade talk.  He says that it is his time to Ascend and that anyone who would help him may keep his sword (as a warsword but with the dragon breath spell set upon it and it always injures those injured by iron weapons).  He asked that his body be guarded by the winner until he can recover it.

1014 - A group of 3 dark trolls and 4 trollkin squat in a cave, praying before a fresco to one of their dark goddesses.

1115 - A group of 4 Broos are tearing apart a dead harpy with their horns and swords while braying mournfully.  Examining the remains of the harpy if the broos are driven off reveals skeletal little broos in her rib cage. The broos have 50 lunars worth of goods.

1205 - A ruined stead destroyed by the Lunars has now become the home of 40 rubble runners.  If anyone disturbs the ruined interiors the creatures will rush out and attack in full numbers.

1214 -  A dragon snail haunts a pool near a warning stone set up by some lazy Storm Bulls.  It attacks anything that comes near.

1310 - A small cairn has been erected for a dead duck warrior.  He has a shortsword marked with the Death Rune (casts Hand of Death using the wielder’s magic points), a tiny fetish of himself (used as a 4 point magic point store), and a gilded helmet worth 125 lunars.  If the items are taken it will arrive as a mummy at the characters’ stead next season to claim its revenge.

1307 - A Lunar Priest and 5 members of the Beryl Phalanx are setting up a telescope for better moon viewing in front of a number of nonplussed Satarite peasants.  The telescope is presumably extremely valuable, but unlikely to find a buyer.

1406 -  A set of burned and smashed urns lie on the ground hear.  They were destroyed by the Colymar tribe when they discovered these ancestors followed Arkat the Betrayer.

1508 - A group of Lunars were ritually destroying a piece of road paved by Sartar, but they were attacked by 6 giant wasps.  The lunars fled after the deaths of two of the Tarshite light infantry. The wasps are laying eggs in their victims. The tarshites have 2 lunars on their dead bodies, as well as their gear.  If the wasps are cleared away and the PCs rest at the location there is a 30% chance the Lunars will return to finish their work, this time with reinforcements.

1511 - The house of a tanner, set away from a nearby tula, is apparently unoccupied.  Investigating the interior will reveal a number of deer have gored the tanner to death in front of his tanning rack, and trashed the house, leaving the floor slick with gore and rendered fat.  The deer act normal in the presence of the PCs.

1604 - A group of Dark Trolls are defacing a small stone dedicated to a king of Sartar’s coronation.  They are are currently spitting upon it, but have done worse things to it previously.

1615 - The crystalline corpse of a mostali is buried in a small mound on a rocky cliff.  Hovering nearby are 3 wasp riders wondering why the mound is there. The crystalline skeleton may fetch up to 190 Lunars from an interested sorcerer.

1710 - A giant laughs over the bodies of Wasp Riders he has smashed out of the air.  One of the wasp riders has a guilt saddle with Animal Whisperer cast upon it (only works on insects).

1716 - A small step pyramid, meant to be an observatory by the Lunars, was being constructed on this site.  However, the workers were attacked by a walktapus who now lairs in the foundation of the building. The local authorities are offering 2500 Lunars to clear out the creature.

1813 - A giant puzzles with a box carved with Heortling script and the Stability and Disorder Runes. The box says “We Are the Doom of the Clever.” Anyone who recites a poem of their own invention over the box will release the five disease spirits trapped inside.

1909 - A lunar official is overseeing a mostali carving an image of a Lunar victory into a cliff face. They are guarded by twelve tarshite light infantry. The official has a small bronze whip which allows him to cast Madness as a divine spell, as well as two potions of Heal 3.

2010 - A broken stone table lies in a crater.  In it is carved a sorcerous ritual to place chaos spirits into stone.  Set about it are three iron constructs who will kill any non-mostali who approaches.

2103 - A group of 5 Telmori hunters have been using this area to clean their kills.  Deer are hung up from the trees as a warning to intruders. 2 of the Telmori can turn into wolves at will.

2109 - A cave here serves as an ancient shrine to Ernalda, built even before her marriage to Orlanth.  It is guarded by a single guardian spirit - once immensely powerful now weakened by time. To interact safely within the cave, the spirit must be convinced of the character’s reverence to Ernalda, but will be confused by myths postdating Orlanth’s wedding.

2205 - Four Telmori and three Wolfbrothers are picking over a wagon of a tarshite merchant and the guards they killed.  150 Lunars worth of salt and fish are in barrels in the wagon.

2214 - Half buried in the sand is what appears to be a toy sized golden chariot belonging to Orlanth. If someone handles it, it is actually a magical trap set by the lunars and will burst into a poisonous gas (as Walktapus poison).

2301 - A long, straight tunnel goes several hundred feet into the side of a hill.  At the far end are 4 krarshtkids waiting to scurry out and attack anyone who comes within. They have accidentally accumulated about 160 lunars in coins and goods and a gold torque worth 60 lunars.

2308 - A group of 3 Telmori are digging through the remains of a temporary arsenal set up by the Lunars during their initial invasion of Sartar.  So far they have outfitted themselves in scale hauberks and with bronze khopeshes. One of them has the ability to turn into a wolf at will. A Wolf Brother guards the entrance to the ruin.

2405 - A small shrine dedicated to Telmor Father of Wolves lies in a copse of trees.  Lunars and axe orlanthi are hung around it as a warning to trespassers. No Telmori are currently present.  On the altar is a hatchet made of iron marked with the Beast rune. Anyone using the axe may cast Berserk upon themselves, but it must be returned to the altar before it may be used again in this fashion.

2506 - A lunar guardpost has been overrun by 30 broo, lead by a broo priest of Thed.  They have a cage where they hold some impregnated captives. The guards have had their viscera torn out and thrown over the walls. From the small garrison they have gathered 400 lunars, 17 wheels, a darra happan shortsword formerly wielded by the commander made of iron and blessed by the sun rune (spells are Fanaticism, Fireblade, and Leap 2), a necklace with a one time use of fire arrow, and three potions of Heal 4.

2516 - Discarded linen scraps lie on the ground.  Touching them has a 30% chance of attracting a disease spirit.

2603 - A small shrine to Uralda lies abandoned except for a perfectly maintained stone fence - in the style of a wicker fence - and the 12 magic cows whose hides shimmer like gold as they graze.  Stealing the cows will either bring the blessing of Uralda, if they are to serve as milk cows, or her vengeance, if they are slaughtered. Having them on the tula may prompt more cattle raids from jealous neighbors.