I've made some minor changes based on playtesting. 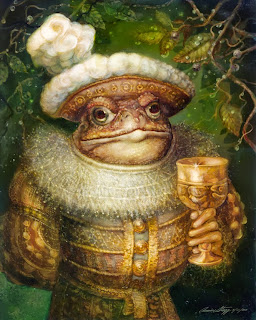 Froglings are frogs that walk and speak in the manner of men.  They are short, only about 4' in height on average, and range between thin and stout.  Froglings make their home in a distant, marshy country known as Hoppland; however, they are found throughout the World of Nightwick as brewers, merchants, and adventurers.  Their skin ranges between slick and bumpy, and is usually a dull green or brown - though more exotic colors and patterns are not unheard of.  They favor flamboyant clothing and jewelry in garish colors.

Ability Score Increase. Your Dexterity increases by 2 and your Constitution score increases by 1.
Age. Froglings reach maturity by age 10 and live to be as old as 60.
Alignment.  Most Froglings are neutral, caring more about profit and hedonism than the fight between good and evil.  In worlds with the full nine point alignment they sometimes tend towards Law, because of their belief in personal honor, but often still seem capricious and madcap to the other races.
Wary. You have proficiency in the perception skill.
Size. Froglings grow between 3' and 4'.  Your size is considered small.

Amphibious.  You may breath both air and water.

Resilience. You receive advantage on saving throws made against poison and disease. You also have resistance against poison damage.
Standing Leap. You may long jump 25 feet and high jump 15 feet from a standstill.
Sticky. You have advantage on athletics and acrobatics checks made to climb, slow your descent, or hold on to an object.

Water Dependency. If you are unable to immerse yourself in water for at least 1 hour a day, you suffer one level of exhaustion.  You may only recover from this exhaustion through magic or by being immersed in water.
Languages. You can speak, read, and write Common and Croakish. You may speak the language of Bullywugs.