A short session because I was Extremely Tired.  Same Writer as last time. 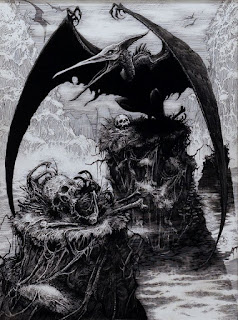 16th Day of The Howling Winds Erstwhile our heroes (that's us! We're heroes. Heroes who watch dogs eat innocent people.) make ready to return to the Warren. A cluster of guards and townsfolk outside the tavern! But lo, Namira is approached by some creepy dwarf with an intensely old amulet with diamonds in it, seeking to sell it to her, because he heard her discussing in the tavern that she wanted to procure some for a spell. But his grift was too expensive and Namira didn't have the money so she, and by extension we, passed on it. But enough about that, there are flying creatures attacking, big and leather-y winged and squawky! Pteranodons, or something like that. Seven of them! !!Fight it out!! We ended their butts!! Well one got away but we did it! Velor decided to make a codpiece out of one of the large heads. We decided that was enough of an adventure for one day, head back inside the tavern, take a nap, and try again another day.