This is one of those posts where I do a kind of campaign pitch in order to cement my ideas in case I want to run it or just to get it off my chest. What I describe below is based on the official Lancer setting but I have decided to switch out blink gates for something more like heighliners or Battletech jumpships for wrap-my-brain-around-it reasons. All distances within a system are done at high but not quite relativistic speeds. 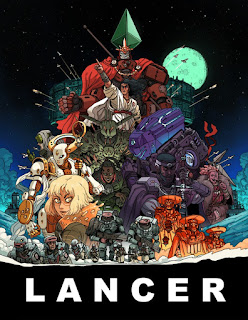 There is a dark power growing at the edge of known space.

It began with the Far Field teams - brief reports that surveyed planets already showed evidence of human habitation mining, and even manufacturing, then whole teams went missing. Nothing was done, despite the anomalous reports. Far Field teams go missing all the time. It's one of the hazards of the job.

Then the attacks started. Union officials and even the victims said they were carried out by pirates. They still do. For pirates, though, they are exceedingly well equipped. They do act like pirates though - taking ships, armor, and sometimes even slaves. In one instance at least it seems they forced an entire colony to evacuate and seized to expand their manufacturing base, sealing off communications with the Union shortly afterward. The captives who have escaped have escaped claim that it is the work of someone the raiders refer to as the "Baron." This has led the few in the core who care what's going on to point their finger at the Karrakin Baronies, but anyone can call themselves something.

Though if they were involved that would explain why nothing is being done. Despite these bold attacks on colonies that are ostensibly part of the Union, few resources have been sent to the frontier. The Council has stated that it is the job of existing auxiliaries to patrol these areas for pirates, a clear underestimation of the threat posed. A few on Cradle and a great deal more in the colonies believe that the Council's refusal to act is partly based on the control the Baronies have over their manufacturing base. Perhaps they are behind it, or perhaps they are trying to keep the Union out of what they consider an internal struggle.

But now the situation has changed. Through the industry of the colonists, the bureaucratic maneuverings of a sympathetic Council member, or the good hearts of the pilots themselves, a troop of the most elite mechanized cavalry in the Union - Lancers - has arrived at Matterhorn Station, near the bulk of these attacks. Despite being few in number and without much in the way of official support, these pilots have the potential put the pirates on the defensive.  Maybe they could even discover who the mysterious "Baron" is and put an end to his sinister ambitions.