I'd been debating doing a post where I highlight a youtuber doing the Lord's work when Stavros Cole pointed out he had a criminally small amount of viewers.

So check out Bandit's Keep. He's replicating a lot of the OSR blogosphere wisdom for the youtube crowd. Here's a sample video:

Email ThisBlogThis!Share to TwitterShare to FacebookShare to Pinterest
Labels: other blogs

The Office of Scientific Investigation 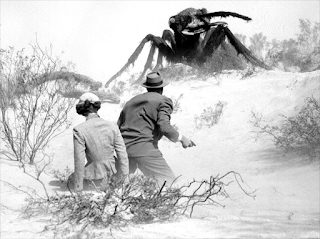 Working for the OSI can be quite dangerous.
1945: the year that changed the world. An act of war that unleashed destruction on a cosmic scale also ushered mankind into a new age. The Atomic Age! Understanding this same destructive force could hold the key to unlimited energy and an understanding of creation itself. At the same time, scientific discoveries about the nature of outer space have opened mankind up to the possibility of a future among the stars. Still other new developments of the age reveal unguessed secrets about the ancient past and even about the nature of time itself.
With these new advancements come new threats. Scientists dabbling in forces newly unleashed create hideous mutations or strange intelligences never before conceived of. Foreign agents seek to steal advances in engineering using their own strange devices. Mankind's use of atomic power may also have attracted the attention of beings from other stars with technology far in advance of anything seen on Earth, if the contactee movement is to be believed. Given the stakes of these new discoveries, any or all of these potential threats could not only spell doom for the country but also the entire world.
With these threats in mind, the member states of NATO decided to create a new body - the Office of Scientific Investigation. From its offices in a secure bunker within the Nevada desert, members of the OSI act as a combination of research, law enforcement, and espionage agency. Its membership is composed of academics, soldiers, law enforcement officers, and secret agents from NATO member countries. Their task is to investigate and contain the new threats of this new age.
The year is 1952, and the OSI has already been involved in a number of classified cases. From what has leaked to the press, agents have foiled a Soviet plot to fake an interplanetary invasion, discovered an island populated with pre-historic life in the Pacific, and investigated the remains of what some believe to be an ancient spacecraft. Fighting enemies both foreign and domestic, wherever science goes awry there you will find the OSI!
Posted by Evan at 4:57 PM No comments: 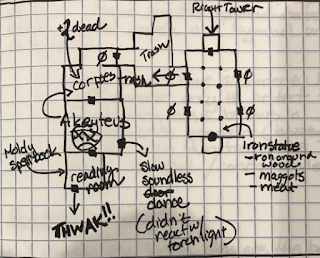 Map by the man himself
If you haven't yet, head over to I Cast Light! and check out the adventures of the Thursday night Nightwick group. Warren's been summarizing them and even includes an info graphic illustrating how many characters have died!
It's been real good to run it with OSE.
Posted by Evan at 3:43 PM No comments:

The DM is a Shut Eye 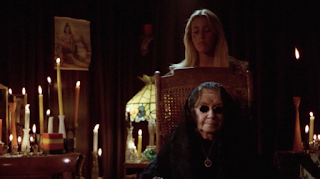 A post on Prismatic Wasteland recently outlined, fairly well I think, the basic procedure of playing an OSR or Classic style of game. However, I have some problems with their prescription for a "modified procedure," and unfortunately to get at them I have to do some theory. This is going to be my most pretentious post to date.
The dungeon master, or at least my ideal one, is what Orson Welles referred to as a shut eye. As Welles explains here, a shut eye is a psychic who has forgotten its a grift and begun to believe in their own "powers." They have entered a state of self delusion because of the advanced nature of their process. They are able to apprehend the factors that used to be consciously thought about so quickly that they can begin the grift without thinking. But what is the grift a dungeon master is pulling?

They are trying to convince the players of what Matt Colville calls the secondary world.* Many players, myself included, want the experience of interacting with a fantasy world that feels real and that reality is a trick. However, like the shut eye, the trick works best if the dungeon master is practicing a self delusion. All of us do this to a degree, because it is necessary to the very act of imagining.
Nightwick regular and former blogger Cole calls the imaginative self-delusion "my dog barks some." To borrow the example but make it D&D specific, the DM rolls on a table and sees that the PCs have encountered a dog. From having the vibe of the setting and the scenario they are running, the DM just upon seeing the existence of this dog in the table knows the type of dog but does not consciously choose it. Colville in his video above talks about looking in on an imaginary dragon and seeing what it's doing. The incident of the adventure, the way a particular question the players ask is answered, the actions of an NPC are thing the DM "knows" without consciously deciding. Some, or indeed all of us because we are mortal, may need to take some processing time to "reveal" this unconscious answer, but it is important that the answer be unconscious or, at the very least, decided beforehand.
If you, like me, want the experience of this kind of violent fantasy tourism, the fictional reality of the secondary world must be maintained for engagement. If it no longer feels real, I get bummed out. Obviously it was never real, but my ability to pretend its real for the purpose of the game requires the self delusion of a shut eye.
One of the easiest ways for that to become punctured is for the DM to ask me, the player, questions about the setting. I locate the secondary world largely in the DM's head, and if they are suddenly asking for my input it reveals the artifice. They are not looking into an imaginary world that is locked in some portion of their midbrain, they're just making it up. The modified procedure, where the DM questions the PCs back about in fiction details, would cause me to be less engaged because I have stopped treating the secondary world like a world and started to treat it as something that is fake. I'm asked to operate the strings on the hubcap that was, moments ago, a flying saucer. I do not take joy in the co-creation of the fiction. Rather, my actions are revealed to be meaningless.
Maybe this is why I studied history instead of english.
* I do not actually condone things he talks about in the video such as rebalancing encounters on the fly or quantum ogreing, but hopefully that is also clear from this post.
Posted by Evan at 12:38 AM 15 comments:

Email ThisBlogThis!Share to TwitterShare to FacebookShare to Pinterest
Labels: theory 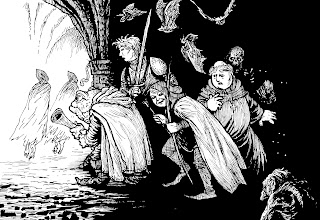 Starting next Thursday, I'm going to be running my world famous megadungeon Nightwick Abbey on Start Playing. If you want to try OSE or do an old school dungeon delve into a Doom Metal Mega Dungeon, consider signing up!

Email ThisBlogThis!Share to TwitterShare to FacebookShare to Pinterest
Labels: Nightwick Abbey, ose, the Search for Players

Tales from the Rattlebones Tavern: You've Got to Find the Demon... 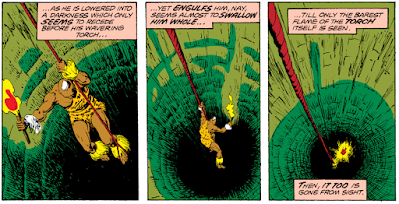 Holes can be dangerous. You go first.
I've been somewhat neglectful in relaying the adventures of both of my parties. The amount I've missed in terms of the Howling Kommandos has been enormous and I'm hoping Huth will soon have a catch up post I can put up here so that I may resume the Kommando Kronikles. The patrons of the Rattle Bones tavern, too, have been having adventures but I think I can summarize a bit at the beginning of this session report and then get back into the swing of things.
The short of it is, after burning the bodies of their viridian foes and giving Beerbane a proper burial, the party was approached by three new members: the pirates Snogmar and Kleftis and the barbarian Baran the Blade. They too mislike the Shah of Effernath, who seems to be looking for the "eye" the party now seeks. They agreed to work together, but after searching the black-metal dungeon they found no sign of the eye. They decided to head to the nearby village of Gashmu so that they might lick their wounds and consider their next move.
In Gashmu Annapurna learned of a nearby dungeon - said to be a bottomless hole in a nearby bog - that would house a demon whose sinews she could use in the construction of a magic bow. Sobek-ra managed to anger the wizard in charge of the village by too openly praising his foul serpent god. Kleftis, angered that someone would slight his compatriot, began to plot a robbery of the wizard's keep. After this had all transpired, the party decided to detour from their current quest for the eye/roc egg and instead investigate the hole in the swamp. This they have found to be seemingly actually bottomless and to have been constructed during ancient Kelnore by remnants of the city of Thracia.

The hole is lined with ancient tombs* and as of yet the party has not found the one which is purported to contain the demon. Navigating the hole has been somewhat difficult as its presence in a swamp means that a waterfall covers each side of the square aperture. The noise from this also makes some forms of perception and communication difficult. We pick up at the beginning of last session where the party had just slain a group of wights guarding one of the tombs.
Characters Present
Annapurna, 5th level Altanian Ranger
Ion Skamos, 4th level Tiefling Cleric of Set
Sobek-Ra, 4th level Orichalan Sorcerer (of Set)
Hjoldahr Braveflight, 3rd level Dwarf Fighter
Baran the Blade, 3rd level Viridian Barbarian
Kleftis, 3rd Level Ghinoran Rogue (only there for the wights)
Monsters Defeated
3 Wights, 1 Black Pudding, 7 Skeletons, 1 Mummy
Treasure Gained
4 pp, 2 priestly black robes (200gp each), a priestly diadem (200gp),  Mournblade
XP
Kleftis: 175
Everybody Else: 518
* I'm using Dyson's bottomless tombs (players don't click that link) for this. The players seemed genuinely surprised that I had it be for realsies bottomless.
Posted by Evan at 3:05 PM 1 comment:

A Product Half the Nightwick Regulars worked On 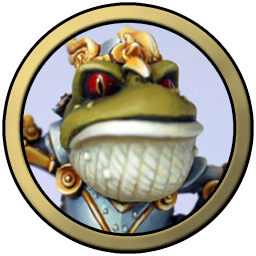 a portrait of the author('s character)
Michael, better known to Nightwick aficionados as Frederick Bull and those who follow the Tales from the Rattlebones Tavern as Annapurna, has recently released the adventure Oakfell Vale. It is published by Abraham Nermal Zzarchov Kolowoski and is dual stated for NGR and OSR games. It also features art by Uein Mundi/Konrad von Hexenzitsen Chris Huth, who y'all may remember as the guy who does the art and layout over at my patreon.

I also play-tested it with a lot of the other Nightwick Regulars (and Huth double dipping). It's about druids and its got bees!
Posted by Evan at 4:31 PM 1 comment: