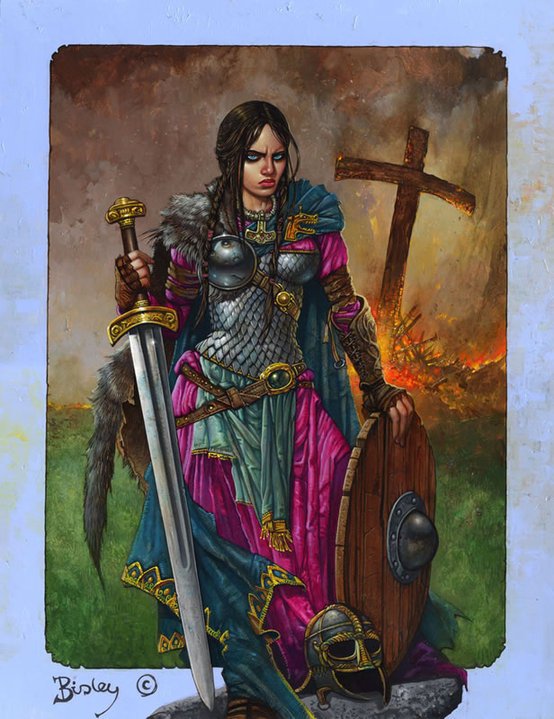 Bildsa
The settlement of Bildsa lies to the east of Skalafell and is the nearest settlement of Daggermen.  It's leader is a woman named Hedris.  Hedris has a difficult time maintaining order in her village and has sometimes come to Skalafell for help.  This amuses Grettir.

Bildsa has no priestesses of Saewelo but some of its members are descended from Nerthuz, and thus they live off of game and what can be gathered from the forest.  They occasionally send bands to trade or, less commonly, raid Skalafell. 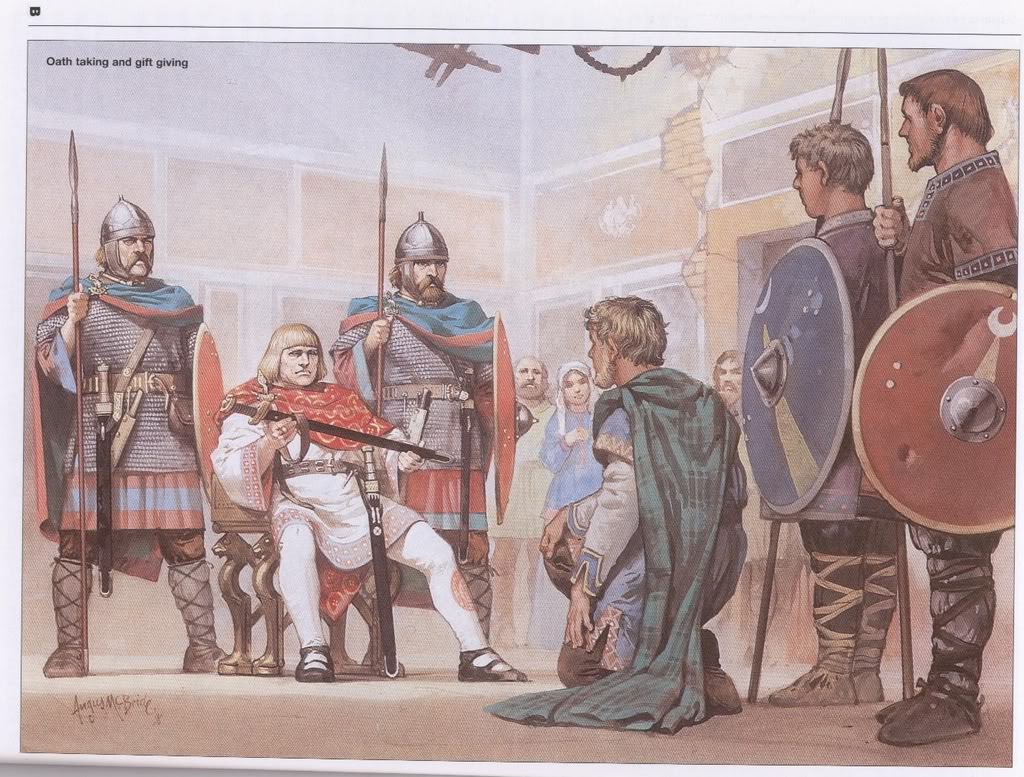 The Spear People
The Spear People claim to be descended from Wodanaz, but the name of their human ancestor was not worth carving on Skalafell's Great Stone.  Perhaps they know it.

They live closer to the Walchos and often trade with them, raid them, and sometimes even serve in their legions.  This has made them love luxury and also fattened them like a pig for slaughter.  They make for good raiding.

Their nearest settlement is called Hjall and is dominated by an old Walchos villa which the Big Man there uses as his hall.  His name is Athelgar.  Their are rumors he may try to host a thing sometime in the future, and it is unknown if any of the Daggermen will attend if he does. 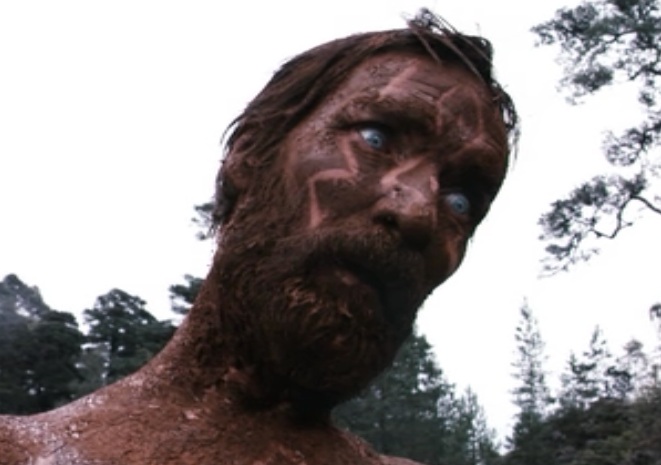 The Red Men
The Red Men come from the north.  They paint themselves in clay and mud, which one must assume they find after their priestesses melt the snow with Saewelo's light.  Their warriors often raid the lands of both the Daggermen and the Spear People.  The magic they cast on these raids is Lightning and Thunder and their warriors favor hammers and clubs.

The loot from these raids is sometimes taken to Skalafell and other villages to be traded.  The Red Men are sometimes difficult to understand, as their speech is slurred but their voices are quick.  They are known cheats.

The Walchos
When the Sun and the Moon still shone, the old people of Skalafell told stories of the Walchos and their great armies and their strange ways.  They had not been seen in the lands of the Daggermen for many years when the Wolves ate the Sun and the Moon and it was a strange day when they returned.  The Spear People say their kings came on white steeds but their soldiers were dead men caked in grave dirt and reeking of Helheim.  One of the living, a strange man in a pointed cap, hurled a great spear across the Rinaz and then the dead men set about rebuilding their old forts.

The Daggermen have not seen these dead men.  Raids across the Rinaz show most Walchos are just men, though they are exceptionally rich and do not descend from the gods.  Their strange priests, who occasionally travel to the villages and halls of the Spear People and the Daggermen, claim their god died but rose again.  Some among Bildsa and Hjall have said they've seen these priests raise corpses out of the ground like draugos.  None in Skalafell have seen this.

Their speech is strange, but since they hire the Spear People as mercenaries many know the speech of men.
Posted by Evan at 11:43 AM No comments:

Email ThisBlogThis!Share to TwitterShare to FacebookShare to Pinterest
Labels: Fimbulwinter 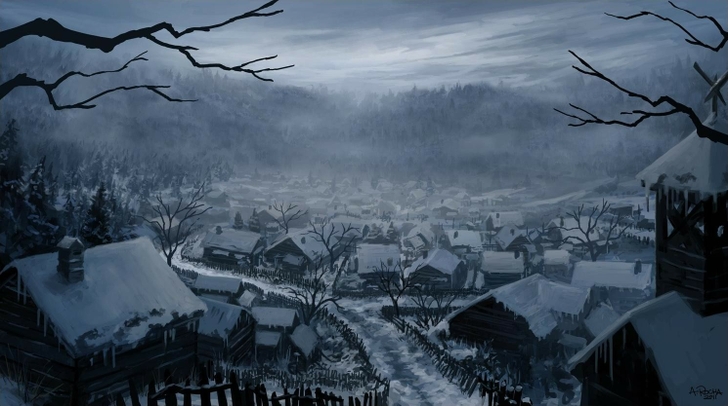 Most starting characters in Fimbulwinter are assumed to come from the settlement called Skalafell, which lies in the southern part of Scandza near the border with the Walchos.  The inhabitants of Skalafell come almost entirely from the tribe of the Daggermen, descendants from Wodanaz's mortal son Gautaz.

Skalafell happens to lie near the crater-lake that marks where Wodanaz fell from the Bifrost when it collapsed.  As such, the people of Skalafell believe it is their duty to safeguard his body until the day when the gods reawaken and the Sun and the Moon again show in the sky.  However, Wodanaz is not the only god revered in Skalafell.  Most notably, the village would not be able to survive without the priestesses of Saewelo whose magics can fool the crops into thinking there is still a Sun and who can also tell time.  These priestesses have made Skalafell a pilgrimage site for other Daggermen.  there is also a small enclave of warriors dedicated to Tiwaz,

A number of the settlement's most important inhabitants are described below. 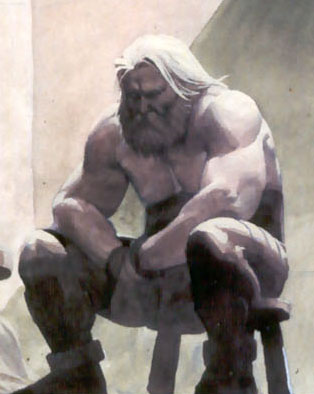 Grettir Fairhair
Grettir is the Big Man of the village.  When the Sun and Moon still shone, he might have been an earl or even a king, but in this age of winter his authority is greatly diminished.  Still, he commands the loyalty of a number of fierce warriors, and his words are respected throughout Skalafell.

One should not take this to mean that Grettir is a clever man.  He is a fierce warrior and charismatic in his own way, but his methods are blunt.  He is well known to rely on his killers to solve most of the settlement's problems.

Grettir is known for swinging his strange, black sword in battle.  Called Deathsinger, the warriors of the village claim he took it from a dead Walchaz during a raid in the south. 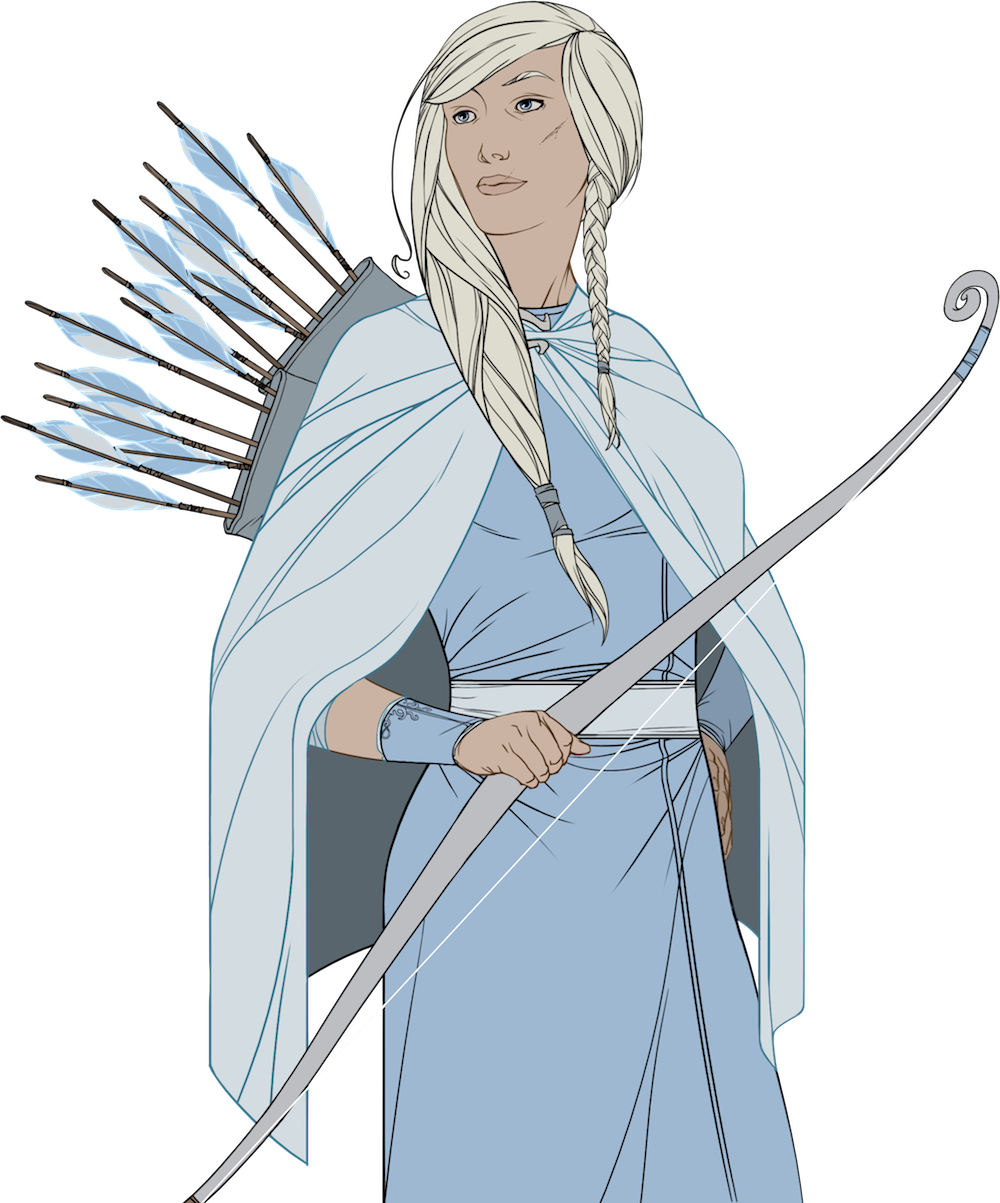 Groa
Groa is Grettir's wife and the chief priestess of Saewelo in the settlement.  While her husband's descent from Wodanaz and fierce killers might keep order in the community, it is the magic of her and her sisters that keeps everyone alive.  Without her the crops do not grow.

There is a sadness about Groa.  Whether this is because of her domineering husband or the weight of her responsibilities in the community is difficult to say.  She is seldom seen outside her chambers in the main hall except during the rites needed to keep the village going.

Geirfrithur  Grettirsdaughter
Grettir and Groa's daughter Geirfrithur would be the most marriageable woman in the settlement if she wasn't so stubborn.  Many have tried to take her hand in an attempt to set themselves up as the next Big Man, but she has yet to accept any suitor.  Recently she has been most fervently pursued by Haukur, whose nose she broke with the butt of a stave.

Her magical affinities are closer to those of her mother, but Alfifa thinks she may be even more powerful.  Her dark hair gives her a mysterious beauty, but has led some to question whether Grettir is truly her father. 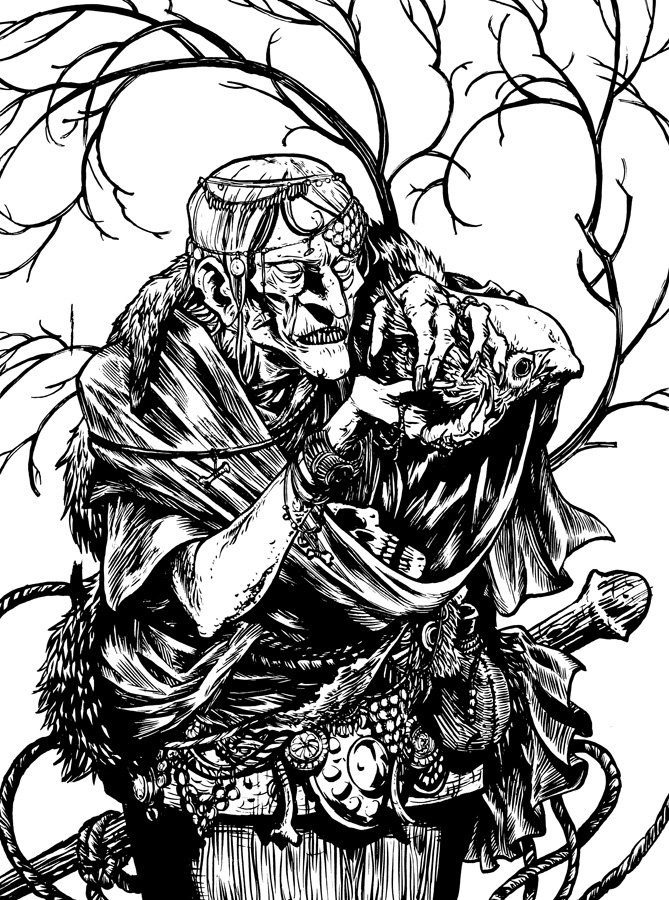 Alfifa
Alfifa is Grettir's rune caster and bone witch.  A descendant of Wodanaz, she knows the strange form of sorcery that is now lost among the people of Scandza since the Sun and Moon were devoured.  She is the only woman allowed in the hall during certain councils.  During these, she often cuts flesh from Grettir's back and "reads" the blood as it flows in rivulets to the floor.  Grettir's warriors find this very disturbing.  At other times she spends hours, even days, in a cave outside the village the fumes from which are said to give her dreams.

It is rumored that she is seeking someone to learn her art lest it die from the world.  Many believe she has her eye on Geirfrithur, but why she has not acted yet is unknown. 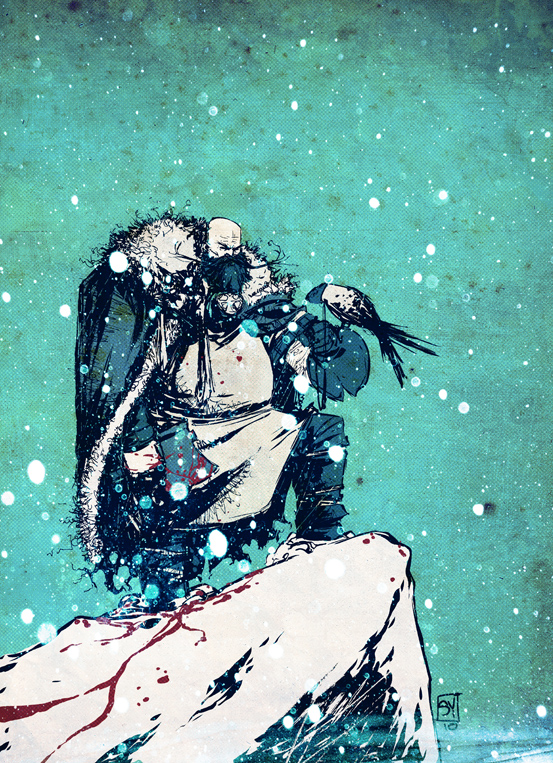 Kolskeggar the Black
Grettir is able to maintain his tenuous control of the village because he has the loyalty of men like Kolskeggar.  A great bear of a man, Kolskeggar is a fierce warrior and descendant of Tiwaz.  Grettir has called on him many times to act as his champion in single combat or to lead raids against the Spear People to the west.  Though still formidable, it is difficult not to see that Kolskeggar is growing old as his head loses the last of its hair and his black beard turns to grey.

Kolskeggar's ax has a head so large that other men would have to wield it two handed.  Its name, Calfsplitter, makes the men of the village wince and clutch their legs when uttered. 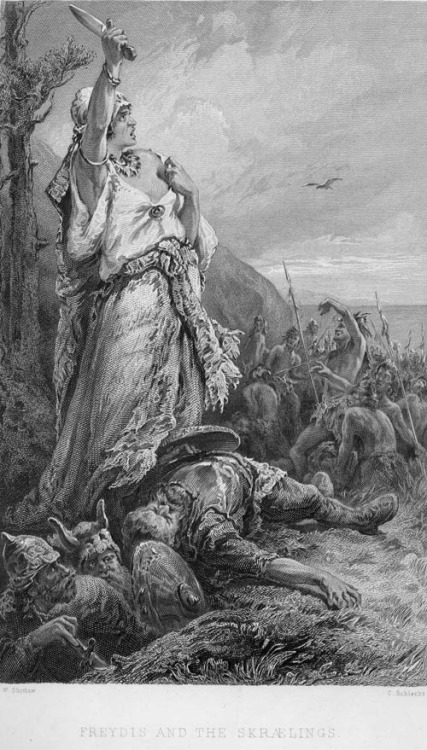 Birna
Birna was once a great shield maiden, but those days are behind her.  She is no fan of Grettir and some of the men think she fancies his position.  She spends most of her days teaching the youths of the village to hunt. 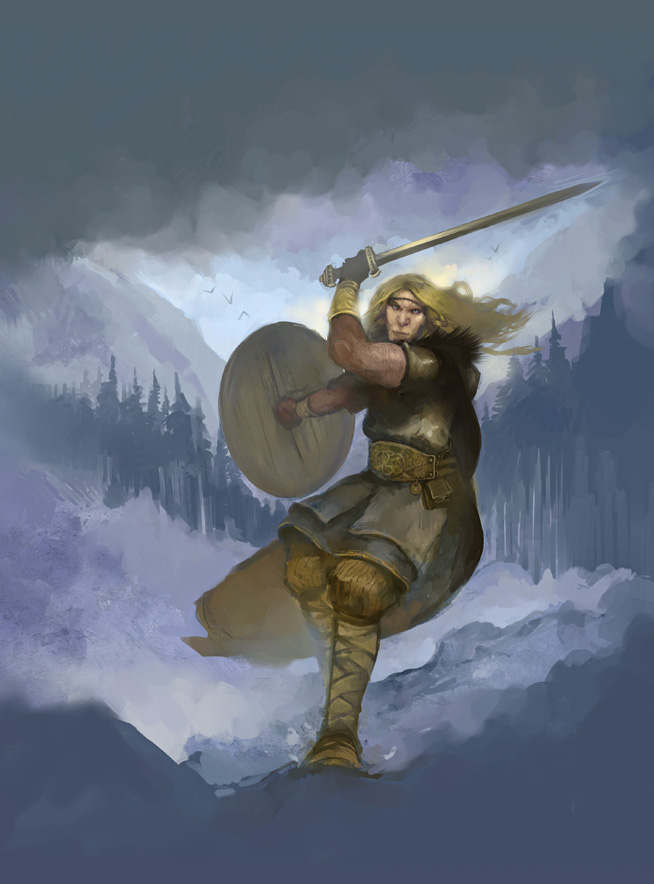 Haukur
Haukur is a young man of the line of Gautaz and the most likely candidate to replace Grettir when he dies.  It is for this end that he pursues Geirfithur; however, his passion for her seems to have dulled since she broke his nose.

It is an ill kept secret that Grettir hates Haukur and Haukur isn't fond of him either.  The warriors at Haukur's side, though smaller in number, often mete out their own justice, much to the chagrin of Grettir. 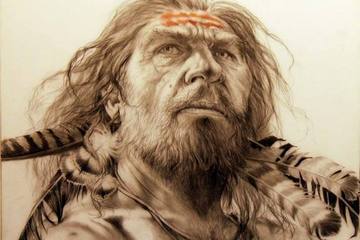 Svartur
Svartur is a Dweargaz from the north who was captured by Grettir's grandfather when the Sun and Moon still shone.  He serves the village as a smith, and though few know where he finds his metal - he never seems to leave the village to trade or mine for it - he has crafted many wondrously beautiful items for Grettir and his warriors.
Posted by Evan at 10:59 AM 1 comment:

Email ThisBlogThis!Share to TwitterShare to FacebookShare to Pinterest
Labels: Fimbulwinter 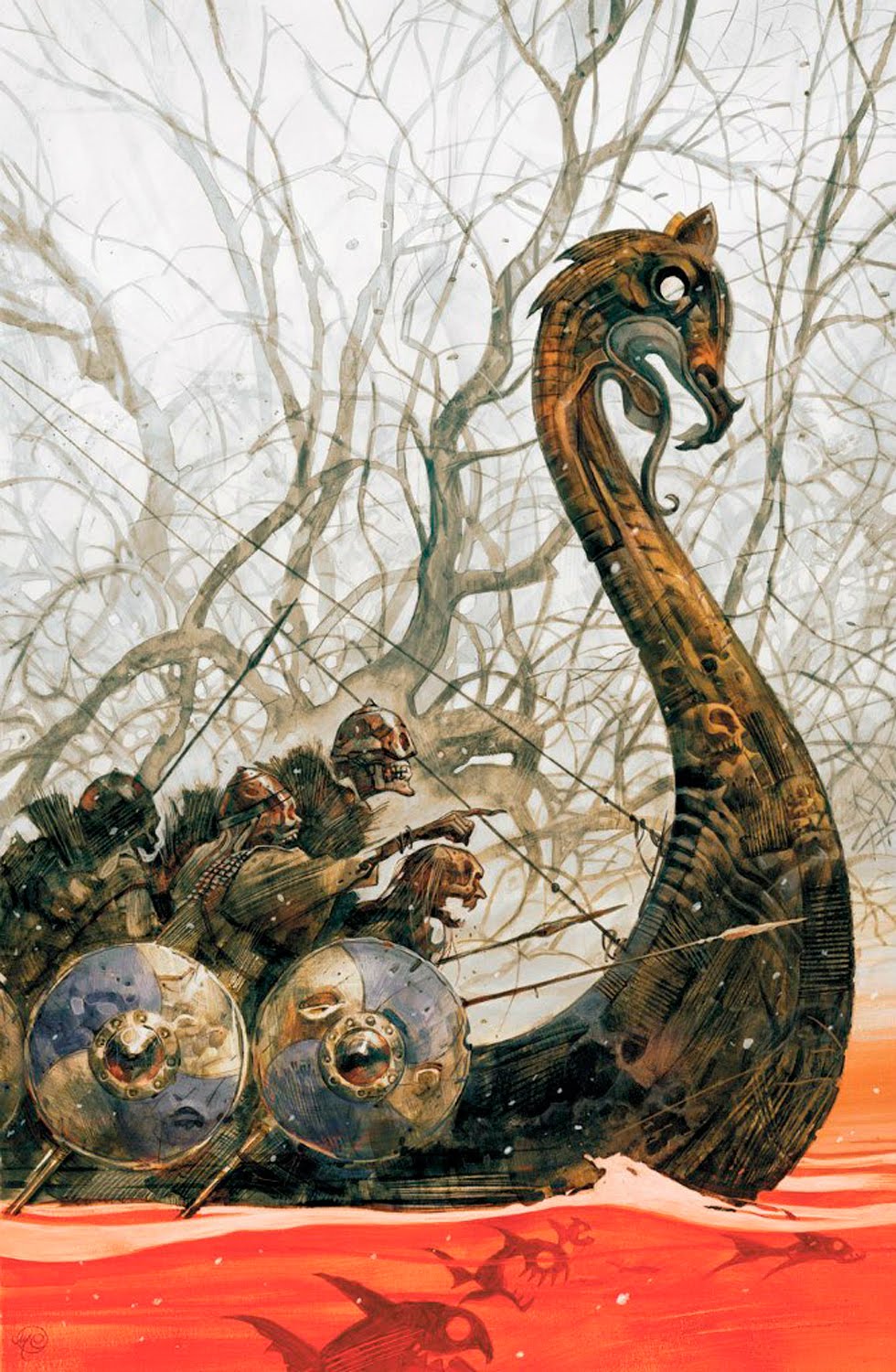 I've been going through kind of a rough patch recently, and this was the first gaming idea I had in a while that got my creative juices flowing, so with the encouragement of Jeremy Duncan I decided to write some stuff about it.