Tales from the Boar's Head

I've mentioned before that I've started running games at my FLGS.  I've decided to center that group around the Boar's Head Tavern in the CSIO. The first few sessions involved whoever showed up fighting against the same cult the Cutthroat Inn group fought against.  Last time, I started running an adventure originally made by Cole for his Swords of the Inner Sea campaign.  I converted it to 5e as well as changed some of the aesthetics to match the history of the Wilderlands.

You may notice that one of the characters is from the home group game I had to abandon.  Some of the players have migrated to the game store group. 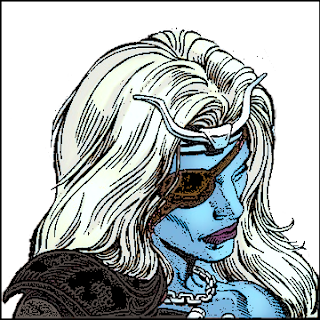 
The past couple of weeks we've failed to make quorum but hopefully their adventures in the Setite tomb will resume tonight. 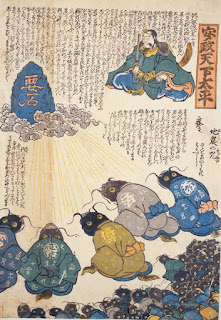 "In High Shang we exchanged much of the beautiful paper money of Cathay for passage to the island nation of Noppin. [Molo digresses here, yet again, to describe the currency of Cathay. This description is the third such in the text and is once again completely contradictory to his earlier digressions. I have omitted it because scholars interested in such things are unlikely to look to a translated text.] Noppin is said to have been originally inhabited by a race of Froglings [sic] that were displaced by the arrival of humans. Despite the protestations of the locals, it is clear that the Noppinese inherited a great deal from these Froglings. Their style and manner of dress, when different from the Cathayans, is identical to that of these creatures, which the locals call Namzu [sic]. Indeed, even their High Pontiff is an exceptionally large member of this race. [Some scholars have translated the title as Emperor, but Molo clearly uses the same form he gives to Pontiff Molestius II, his contemporary]

"The religion overseen by the High Pontiff of Noppin is also clearly influenced by whatever paganry the Namzu engaged in before their coming, as it is unlike that of Cathay or the Land of a Thousand Idols. Lawful monks from Cathay have brought their heretical from of the Law to Noppin and now the High Pontiff is head of a kind of hybrid Church. Due to the influence of the Law and perhaps in imitation of the First Emperor, the people of Noppin emphatically insist that their large namzu pontiff is a human, noting his 'mustache' instead of his whiskers, and his 'lovely' 'hydrated' skin instead of his oily hide.

"The smaller Namzu are relegated to the fringes of Noppin, living in the cold north or in the forests of Kokushi. It was in the Suicide Forest of Kokushi that our expedition had a most strange encounter with them. A frogling merchant we had picked up in the Land of a Thousand Idols stated many times that he was very confused at our attempts to communicate with his Noppinese cousins.  He claimed they were merely catfish dressed up by the locals as a prank. When we were able to speak to them in a crude form of Cathayan dialect, the frogling still insisted that they were mute animals. The namzu, too, said that we must have dressed up the frogling as a joke and talked it to walk upright. They said that the frogling could not speak and only croaked. 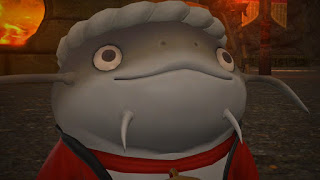 A Namazu in traditional dress.

Namazu are small, catfish who walk and talk in the manner of men and are native to the islands of Noppin. While superficially similar to Froglings, and in many ways occupying the same social niche, the two races do not recognize the each other's person-hood. 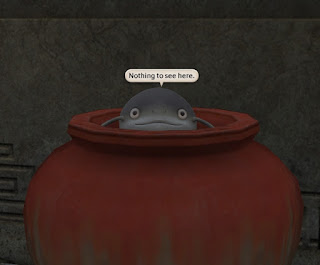 Namazu are said to be quite stealthy.

Age: Namazu reach adulthood around age 20 but can live to be several centuries old.

Alignment: In the five-fold system of the World of Nightwick, Namazu are usually Neutral and are never Lawful or Chaotic. In the nine-fold system of other worlds they tend towards Chaotic and Good alignments.

Size: Namazu are usually no taller than 3 feet. Your size is small.

Speed: Your speed is 25ft for both walking and swimming.

Amphibious: You breathe both air and water.

Sensitive Whiskers: Namazu can feel the vibrations of the air and earth with their whiskers. You gain advantage on Dexterity Saves made to avoid pit traps, sudden collapses, unseen precipices, or any other effect that would cause the ground to suddenly not be beneath your feet.

Resilient: Namazu's bodies are compact and strangely pliant. You never take bludgeoning, thunder, or force damage on a successful saving throw even if the effect would normally deal half damage.

Small and Barely Noticed: Namazu are used to avoiding the Big People. You are not blocked by any creature that is a size or more larger than yourself, and you may always hide if only other large creatures are looking for you - even if you are not initially obscured.

The Cutthroat Inn: A Quick One

This session didn't last very long due to my feeling incredibly scatter-brained.  Still, some stuff did happen and it needs to be recorded. 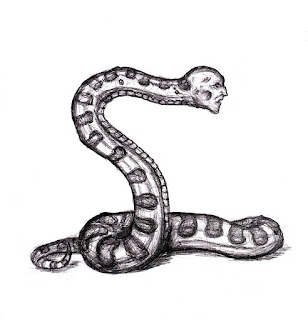 Xp Per Player (in either or both sessions)
75
Posted by Evan at 2:40 AM No comments:

The Future and/or Past Revisited 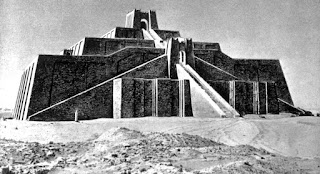 Time is a Black Ziggurat - the wisest human

Seven years ago I attempted to create a kind of recursive timeline of the campaigns I knew about or participated in, since it became established that Uz existed in the "future and/or past." Further research has revealed I inadequately calculated for the Zigguratic nature of time, creating false worlds (campaigns that were never run or that I didn't play in), and not seeing just how much each recursion is different. After careful years of study I have created a more accurate model that is rendered below.

* These settings were both run by Nightwick Regulars but do not have blog posts I can link to (yet).

** I have never actually played or run Humanspace Empires but it so prominently features in the past of a number of these games that I thought it necessary to include it.
Posted by Evan at 1:24 AM 1 comment: