A note on the dating: the Wilderlands of Swords & Devilry uses a version of the Corrected Commoners Calendar (or at least a calendar by that name) but the designation BCCC is "BEFORE Corrected Commoners Calendar."  Though this is the origin of the acronym, the actual 1 CCC date is the purported date of the founding of the Orichalcan Empire.  The calendar was only adopted c. 4000 CCC. 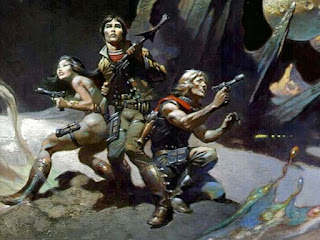 "Pre-History" - Time of the Uttermost War.  Check is only possible with access to extremely ancient sources.  D30.
40,000 BCCC - The Galactic Federation establishes a colony on Ghenvek IV.  The planet has conditions similar to Earth during an ice age with most of the planet being cold but the equatorial zone still being tropical.
37,000 BCCC - The Markabs go to war with the Galactic Federation and attack Ghenvek IV.  This is one of the two events referred to as the Uttermost War.

30,000 BCCC- The Uttermost War ends with both the Federation and the Markabs having to abandon Ghenvek IV, however they leave a number of colonists. The colonists descend into barbarism and forget their technological past. 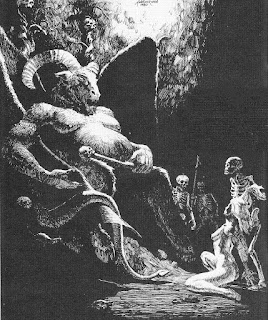 Demon Empire - Domination by "Demons," the alien colonists of the Markab Empire. DC 30.
24,000 BCCC - The Markab Colonists dominate the area of the Wilderlands during a period known as the Demon Empire.

20,000 BCCC - The slave races of the Demon Empire discover advanced AIs and both magical and technological artifacts.  These manifest themselves as the gods of the Wilderlands and attain actual metaphysical status due to their newfound worshipers.

15,000 BCCC - The slave races and their gods overthrow the Demon Empire. 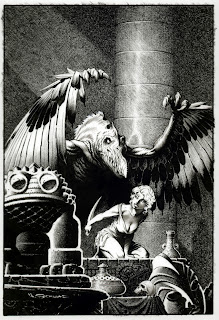 Elder Races - Time of the Progenetors of the modern races. DC 30 non-elves, DC 25 for elves.
8,000 BCCC - The kingdoms of the Grey Elves and the Reptillons are established.

1,500 BCCC - The Gods give the peoples of the Wilderlands a prophecy that Men will one day dominate the world.  The Reptillons attempt to create their own race of Men (the First Men - Dragonborn) in an attempt to frustrate the prophecy.

1,000 BCCC - The Grey Elves experiment with ways to expand their magical power using strange biotechnological implements from before the Uttermost War.  Their experiments bring ruin to their civilization. Man arrives under mysterious circumstances (created by Grey Elves?) and destroys the Reptillon civilization. 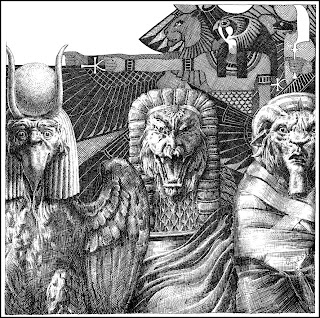 Ancient History - Time of the Orichalcan Empire and the early years of Kelnore. DC 25.

2000 CCC - Ghinorians set up colonies across the Wilderlands, most notably in Kelnore (now Tarantis) which becomes their capital.  Strangely, they do not settle in the lands of the old Orichalcan Empire. At some point around this time the old Orichalcans split into the civilized Alryans and the barbaric Altanians.  More mystically powerful examples of the “true” line exist in isolated groups.

Imperial History - Birth and Height of Viridistan. DC 20.
2500 CCC - During the height of Kelnore, a strange magical occurrence awakens the god Armadad Bog in the Trident Gulf.  He creates the first True Viridians

2601 CCC - 3000 CCC - The Viridians conquer the much of the Western Wilderlands, isolating the Ghinoran city of Damkina and subjugating the area north of Lenap.

3000 CCC - The Alryans refound a city on the site of the old Orichalcan Empire.


3500 CCC - Tharabians migrate from somewhere north of the Wilderlands, settling in the northern part of the Pazidan Peninsula and east of the Viridian Empire.

3600 CCC - The Tharabians capture the Alryan City creating a hybrid culture.  The city is thereafter known as the City State of the Invincible Overlord.


4000 CCC - The Gishmeshi migrate from East of the Wilderlands, invading the heartland of Kelnore and capturing the city (renaming it Tarantis).  Kelnore is no more.


4200 CCC - Viridistan begins to wane even as it is able to consistently defeat the CISO.  Civilization in the Wilderlands Ebbs. 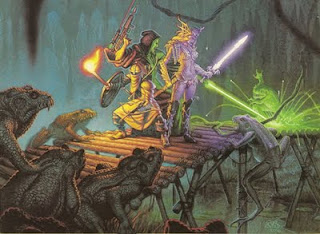 Modern History - The Decline of the CSIO. DC 15.
4300 CCC - The Skandiks and Avalonians migrate from the Northern Wilderlands.

4400 CCC - Karakhan emissaries come to the Wilderlands, find its civilization in a weakened state, and begin to set up colonies near the Ebony Coast.


4433 CCC - THE START OF MY ORIGINAL WILDERLANDS CAMPAIGN


4434 CCC - The Skandik Kingdoms east of the CSIO are unified by a group of adventurers.  The new kingdom is allied to the CSIO.


4435 CCC - The CSIO is destroyed when a relic of the Uttermost War is activated.  The Unifiers of the Skandik kingdom are able to destroy the relic before it does more harm through sheer luck.  This feat so impresses the gods that they are given demigod status. One of the demigods, Bjorn the Mighty, rebuilds the CSIO and makes himself the Overlord. 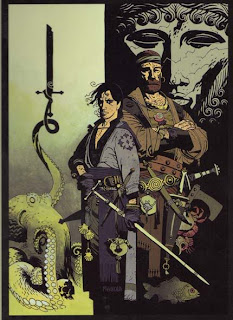 Recent History - The Rebuilding of the CSIO and war with Viridistan. DC 10.
4435 - 4450 CCC - During the long years of rebuilding, Viridian power waxes again (though not to its former glory) as it takes advantage of the CSIO’s weakness. Tharabians leave the CSIO area, upset with the new Overlord’s favoring of Skandiks, and join Viridistan as mercenaries.


4450 CCC - Bjorn the Mighty marches forth to reclaim areas taken by the Viridians.  He is partially successful but ultimately defeated by the magic of Armadad Bog.  The status quo from before the CSIO was destroyed is restored.

4500 CCC - THE START OF ANY FUTURE CAMPAIGNS

Email ThisBlogThis!Share to TwitterShare to FacebookShare to Pinterest
Labels: wilderlands