I've missed Monster Monday for two weeks in a row, so to make up for that, here are two monsters that make Uz a horrible place to live: 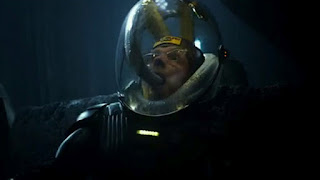 Corpse worms are awful scavengers found in the various caves, ruins, and undercities of the Future-Past.  They appear as worms roughly six feet in length and three inches in width.  The face of a corpse worm is a hard, blunted point ringed with fleshy holes.  Their skin is slimy and incredibly tough, and it is possible that they are a synthetic creation of the Reptoids.

Corpse worms attack by thrusting their face into their opponent’s belly, eyes, or other soft regions like a sickening harpoon.  After a successful hit, a corpse worm deals automatic damage every round thereafter until the worm has slain its victim.  Thereafter, it will stay in the victim’s body digesting its internal organs.  They will only leave the body when finished - which takes several days - or if disturbed in some way.

Grabbing a corpse worm with one’s hands is ill advised.  They secrete a strong acid from their skin that will do one die of damage to anyone with bare hands.  If some sort of gauntlet or armor is worn, it will dissolve in 1d6 rounds, dealing 1 point of damage to the wearer once the process is completed. 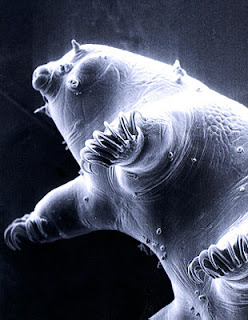 Glassy things haunt the upper levels of the Uz undercity.  It is believed to be a martian predator, and it is possible that these creatures swarm the martian tunnels deep below the city of Uz.  They are large, six-legged creatures whose body is made of a warbly, transparent substance.  The glassy thing’s body is almost in the shape of an onion, while its legs are long and tapered.  Its head is little more than a blunt snout ending in a open maw ringed with glistening, transparent teeth.  Its eyes, while small, are adept at seeing in the dark and pick up a spectrum utterly alien to man.

On either side of the glassy thing’s body are sacks filled with a horrible mucous.  It can propel jets of this mucous up to 120’.  This mucous contains a toxin that forces those hit by it to make a saving throw or be paralyzed for 2d6 turns.  This is the way by which glassy things hunt their prey.
Posted by Evan at 6:25 AM 1 comment:

I've been trying to write this post ever since I first came up with a Fistful of Denars.  You see, I have a problem.  I often desire to run a historical campaign, but I worry over issues of accuracy so much that I never get one off the ground.  This is partially a function of the very thing that makes me want to run the setting in the first place: history is what I have my degree in and, God willing, what I will soon have an advanced degree in.  This gives me a crippling desire to get things right, because I'm "supposed to know that stuff."

So I need something to make me think of the setting in a different way - something like Jeff's Wessex.  He distanced his setting from real world England by using a fictitious map with the names changed.  I kept trying to figure out how to do the same, but the only headway I ever made was by changing the Auvergne to Averoigne, but that comes with certain tonal implications and also the added baggage of trying to represent one of CAS's settings faithfully.

I hit a brick wall, but last night I remembered this: 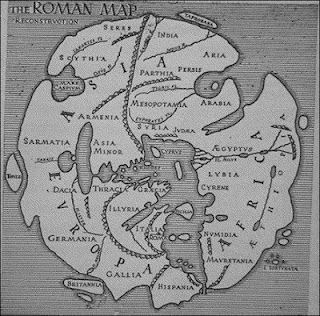 That is a map of what would have been the Known World to the Greeks and Romans. Note that Asia is at the top and Jerusalem is roughly in the center as in a Mappa Mundi.  This map contains the parts of the world I'm likely to run a campaign in (Western Europe and the Mediterranean) but is still fantastic enough that I can distance myself from worries about accuracy.

Here is a list of historical games I could see myself running at some point:

Rome c. 150 - 100 BCE
PCs are ex-soldiers or otherwise homeless people who seek to make their fortune in the Eternal City.

Rome c. 400 CE
PCs are a comitatus of Germanic raiders, Roman mercenaries, or whatever else they want to be trampling the Roman Empire under their sandaled feet.

Britain c. 450
PCs are the leaders in a Briton community facing an invasion by some slightly inhuman Anglo-Saxons, weird forest gods, and other British groups.

Ireland c. 850
PCs as Viking settlers in Ireland.  I actually ran this one session or two in college, but the group ended up not being able to meet due to schedule stuff.

Southern France c. 1050
This is a Cthulhu Dark Ages idea I've been kicking around.  PCs work for the bishop of a cathedral town investigating reports of miracles, monsters, and banditry.

Byzantium c. 1050
PCs as mercenaries - Latin, Viking, or otherwise - in Constantinople or a fictitious Byzantine city.  Become emperor or get blinded trying!

Southern France c. 1221
See the above link to the Fistful of Denars Post.

England c. 1215
Can you say "Robin Hood?"  This one is a bit more half-formed than some of the others, but it'd be pretty awesome to run a game about medieval outlaws.

Looking at that list, I see that I'll need to clean up Northern Europe a bit to make room for Scandinavia so that those vikings can come from somewhere.  The general rule will be that if you're in Western or Northern Europe or the Mediterranean it'd look more or less the same but with monsters and magicians.  The further afield you go, the more it gets like something John Mandeville would write about.

I'd set up each of these campaigns in the following way:

1) History before the start date of the campaign went more or less as it did in the real world - excluding those areas that are cut off on the map.

2) The PCs' actions will constitute the basis of a new, alternate history.

3) Later campaigns set after the events of one that's already been played will make references to events in that campaign.  So if you make your guy Roman Emperor, he'll show up on a list of emperors you find in the HRE game and you'll probably find coins with his face on him.

4) All of them will have way more monsters and dungeons on them than historical Europe did (i.e. they will have some).  This one probably goes without saying, but my wife was quite worried there would be no dungeons when I pitched this to her.  She loves dungeons.

One final note: I'm not getting rid of the Dark Country or anything.  This was more of mental exercise to see how I would run a setting where Romans were Romans and Vikings were Vikings without being filled with crippling doubt.

Yesterday's session got off to a bit of a slow start because I was expecting a few more players to show up than actually did,* but here are the highlights from once it got started.


It had its starts and stops, but on the whole I think it went well.  There were a few moments where we had to look up something, but I still find WFRP's system fairly intuitive.


*Undoubtedly, this is a karmic reward from the fact that I had missed two sessions I had said I would be in last week.

**I'm not entirely happy with the way that played out.  Originally, one of the infected PCs was scheduled to be in the session, but he had technical problems and couldn't join us on G+.  I had forgotten to account for Fate Points, which I believe can save you, and I'll need to discuss the matter with the parties involved.  However, it's likely that after my move, I'll be using WFRP to run the Dark Country.  This would mean I wouldn't have to worry about it.
Posted by Evan at 7:28 AM 4 comments: