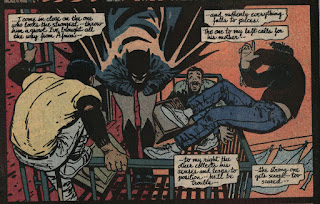 Despite my posts about the end of the world, I've actually been running FASERIP/Marvel Superheroes for a few weeks now.  I've been missing making hexmaps and figuring out what ruins go where and whatever, which is why I was thinking about those other ideas, but I'm having a lot of fun running a supers game.  This is the first time I've ever been able to get one to go for more than one session, mostly because my players seem into it.  I'm still trying to find my sea legs with it, but I think it's going well.

I originally wanted it to be kind of a sandbox-y affair but that ended up being untenable in part because of the nature of the genre and in part because my players wanted to start sooner than I could get one prepped.  What we've been doing instead is a thing that I think is a fairly common practice on G+ where I throw out somewhere around three different hooks and they pick one to pursue.  Most of the first few sessions were them trailing after Mysterio (report on that shortly), but the other threads were open if they wanted them.

This pitch is not based on what I am running.  Instead it's based on something that came up in a conversation I had with Cole.  The premise is that it is the first year that anyone in the world has been a superhero, your PCs are those first superheroes, and you are in the most crime ridden city in the US.  For this idea to work, you probably need something within the power-scale of Robert's Marvel '78 houserules.  My gut says that you should try to stick to "basically a tough human but with fancy gadgets," but seeing the players try to figure out how to turn any situation into one where their powers are useful is part of the fun of the game.*

However it's not really who the characters are that makes this idea interesting but the structure.  It is, to borrow Zak's parlance, an anti-sandbox.  The city needs to be so crime ridden that the upright heroes are fighting an uphill battle.  The cops either "don't go" into certain districts or are so corrupt that they implicitly or actively support the criminal activities of the various crime lords.  Crime lords that, at the start, are of the more mundane variety.

I hope to be able to go into this more at length in a future post, but here are the basics of how you set up your anti-sandbox:  First you divide the city into districts and give each one (or groups of them) to various crime lords.  You don't want too many that the prep becomes overwhelming but you also don't want to have all the power in the hands of a single figure.  Even Kingpin had to tangle with the Maggia.  Next you create some rackets the crime lords are running.  In the end you're going to want the rackets to be in a kind of onion-skin pattern, with hints in each leading to some deeper secret, but all you really need to design at the beginning are the outer layers for each crook.

PCs get hints about these rackets from their contacts, friends, or just from beating up some thug they know to be associated with the appropriate gang.  As they bust up the various rackets eventually one or more of the crime lords will collapse.  That's when the game enters Year Two.  The costumed antics of the PCs inspire villainous NPCs who become supervillains, replacing the structured organized crime of the crime lords with madness and pumpkin bombs.  Eventually the threats might become even greater - requiring the PCs to enter Subterranea or travel to the Savage Land or to outer space or whatever.

This structure has some quirks to it.  The main one is that it turns from an anti-sandbox where the players are making their decisions to a more typical supers game where the heroes are reacting to crimes.  This might be a bad thing or it might not be depending on what you think of typical supers games.  Layered within that is a more positive element, I think, which is that the game has a more obvious sense of advancement.  You have kinda three tiers - crime lords, supervillains, cosmic threats - and advancing through them is not something one normally sees in a supers game.

The biggest negative I can see is that it's hard to integrate pre-existing heroes into this scheme.  For one thing, I can't really think of a Year One type thing that involves a team.  I guess you can do the Bat Family, but even then Robin and Bat Girl are pretty clearly aspects of a post-Year One Batman. Some of you may not see a problem here, but I've found running a game for people playing pre-existing heroes extremely fun, in no small part because they roleplay more than I've ever seen in any other game.**  Also, superheroes are kind of silly.  I think they're silly in a wonderful way, but making something intentionally silly is a good way to tell your players "this setting doesn't matter."  Picking Moon Knight or whoever alleviates this somewhat because the character is taken seriously in the comics even if the things he's doing are inherently silly in a real world context.

A smaller negative would be the lack of enemy variety within a tier.  You'd spend a good chunk of your early career not fighting a guy in a costume.  That's kinda lame.  However, I think the progression from tier to tier will help alleviate that somewhat.  Plus, Marvel Characters don't swing as wildly in power over time as D&D ones due, so you can always try to punch above or below your weight class.

Unfocused Thoughts on the End of the World

So I saw Fury Road and we're about twelve hours away from a Fallout related announcement and I have two post-apocalyptic campaign ideas kind floating around my head and I want to flesh them out a little.  I always find these kinds of posts are good for doing that.

Instead of doing two separate posts, I decided to juxtapose the two because it's unlikely I would run both.  The first idea is one I've had in my head since college, and one I've mentioned vaguely on this blog before.  I recently found a download for wilderness mapper, which is what I used to make the map back in college, and it got me all nostalgic.  Both of these maps were made with that program. 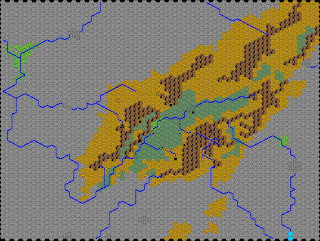 Ok now for my second idea.  This one is easier for me to do because it is closer to Mutant Future and thus I don't have to do any work modifying a system or something.  It is called Mutassippi. 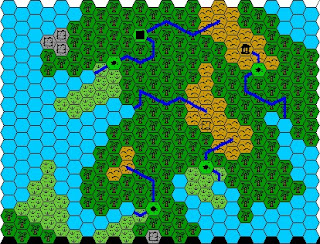 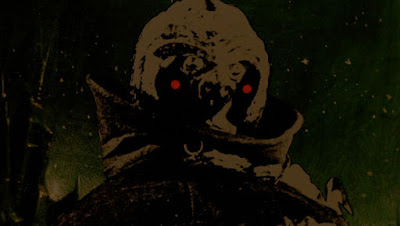 Before I begin my discussion of the Great King of Hell known to mortals as Armadeus, it is important that I establish the nature of such creatures.  As creatures of the Law, Men feel the innate urge to categorize things.  As beings of chaos the demons of the Pit defy categorization.  However, it is part of Armadeus's trickery that he mimics the Law.  He is a divider, but his divisions are false.  He is a shepherd but he places wolves among the sheep.  He is a ruler but he walks unseen among his subjects.  His madness is subtle, but be wary of thinking one can understand him, for false understanding is his purview.  To know him is to be ruled by him.

It is said that Armadeus commands sixty-six legions of Demons commanded by the Twenty-two Dukes.  He sends these on great campaigns of lies and deceit in the World.  Their weapons are promises unfulfilled  and sorrow and ruin.  It is said that he was the first to silence of the Holy Thrum of God within men and spread the languages among them so they could no longer understand the true meaning of the law.  In the Realm of Man it is said he first divided the nations, but the clergy of Karse and the Iron Kingdoms resent this idea for obvious reasons.

It seems that the Emperor of Lies has difficulty manifesting in the World, which might explain his reliance on his lieutenants.  When he is summoned he appears as a shadowy figure in a great cloak wearing a great helm or crown of bronze.  His eyes appear as spots of light in a color that does not normally exist in the spectrum of colors created by light in the World.  Its closest Worldly equivalent is mauve.

His pacts are sealed with the taking of the supplicants eye.  Is crown and helmet are "studded" with these eyes and it is said that he can use them to see anything his supplicants can see.  Texts are divided on whether or not he replaces the eye, covers it with a patch of skin, or leaves only a festering hole that refuses to heal.

Unlike the Horned One who makes his cults among women and the downtrodden, the Master of Hate seeks out individuals of noble bearing and ambition.  He is particularly fond of seducing members of the Church, for he knows they all too often wish to wield the temporal sword more than the spiritual.  Princes too know his whispered promises and he offers them cups full of bile which turn them with spite against their own race.  This is not to say that he ignores paupers, for he knows that they can be turned to his purposes with the same lies and promises of power.  Armadeus knows that in Men's hearts are filled with envy for their fellow man.  He knows because he put it there.

When his supplicants organize themselves into cults they are known to wear hooded robes bearing the symbol of an shining eye.  Often this means that the eye is wreathed in flame, but more commonly it is depicted as being inside a pyramid of light, a hollow mockery of the tetraphim.

Armadeus's promises of power sometimes find their way into the ears of those who study the magical arts.  He is the Lord of Bone and Commander of the Damned, and those who follow him gain power over the corpses of the dead.  Or so they believe.  In truth no man can control the Restless Dead for long and those who are tricked into believing they can usually find themselves among their number.  Though necromancers may have a tenuous hold over the undead, Armadeus and his Dukes control them utterly.  Even among vampires, liches, and other seemingly intelligent forms of undead agency is an illusion.  They are the unliving avatars of his will. It may appear to Men that these creatures often scheme against each other, and this is true.  Armadeus may be a manipulator, but remember he is mad.  He is not the Law and his attempts at empire are undone by his own machinations in the same manner as those of his supplicants.