At the suggestion of Huth I have created a number of hooks for investigative/horror games based on 1950s sci fi and horror movies. 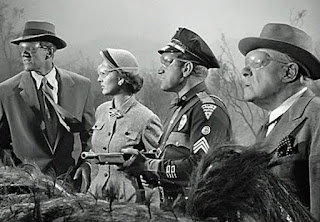 
Here's a bonus one from 1963, since Blue Oyster Cult wrongly thinks its from the '50s.

Normally I do these posts for something I haven't developed as much as I have Karse, which I've posted about a few times, but I want to nail down some of the bigger picture stuff and think about how I would actually run it.

The name, I should note, comes from taking Sark and Gygaxifying it.  After hearing it said "Cars" by a number of blog readers I play online games with, I added the E to make it clear it rhymes with arse.  Apparently there is a place in the Forgotten Realms called that, but I haven't thought of a better name yet. 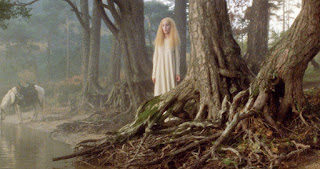 Wounds and Criticals in WFRP 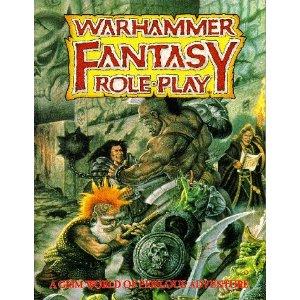 That goblin is feeling it.

I am what is know in horror movie circles as a gorehound.  During some theater-going experiences it has taken all my willpower to not throw up the horns and scream "Rad!" at the display of human viscera.  Spewing blood, glistening intestines, and swinging limbs - I like it all.*

Naturally this propensity has made it into my refereeing.  Nightwick's rooms are often blood-spattered abattoirs and enemies often fly apart like the clay and goo effects of Evil Dead.  In the early days of my DMing the PCs were just as likely as the monsters to be described as walmart bags full of blood and wet chicken parts.  This led to my having a reputation as a killer DM even more than I do now.

That was until what remains either my first or second favorite rpg: Warhammer Fantasy Roleplay (2nd edition).** In WFRP (1e and 2e anyway) instead of hit points you have Wounds (which are basically hit points but their name is taken from the wargame rules).  When a character runs out of Wounds, they do not die as they would in OSD&D, but instead they go to something like a OSR Death & Dismemberment table.  These are called critical hits.

It is a bit more detailed than a typical Death & Dismemberment table, with hit location mattering (though usually only for crits) and some optional tables differentiating results based on the type of weapon used.  This is maybe a bit much for many refs, but I found reading off the hideously detailed descriptions of evisceration very appealing.

Another difference between a WFRP critical and a Death & Dismemberment table result is that the character could very easily still be alive and capable of taking actions, though at a penalty.  A character who has had their knuckles jammed can push on if they feel brave enough, but may end up losing a leg or dying of gut rot.

This is an obvious inference from what I've already said, but I think it bears reinforcing: WFRP crits were not like D&D crits.  They did not happen on a special die result, they happened when you ran out of wounds.  They were a buffer between the character and death, but they were a buffer that allowed me to revel in spilled blood.  The characters no longer had to die to satiate my desire for gore; in fact, the means by which I got to describe the gore usually meant the PCs were alive longer.

For a lot of you this may be common knowledge - though I know from various G+ conversations that their role as a buffer is often lost on people. I bring all this up because of my disappointment with the modern inheritors of WFRP.  Zweihander has exchanged this beautiful system for one that is much more like the damage track in d6 star wars and having special wounds occur on special rolls.  This makes combat in that game more dangerous than it would be in old school WFRP.  A preview of Cubicle 7's upcoming edition, which I had been looking forward to, states that

"Critical hits are a staple of WFRP, and in Fourth Edition occur on especially successful blows, as indicated by the roll of a double. In addition to extra damage and special wounds, critical hits can inflict a variety of Conditions that change the way combat works for those who receive them."

To my mind, that misses a lot of what made the original system good, and when combined with the weird meta resource of "advantage" it looks like I'll be sticking to 2e for any adventures I want to have in the Old World.

One last thing: There's a kickstarter where I'm a stretch goal.


*I suppose I am not one for scenes of torture, preferring instead the explosion of sudden violence.

**One of my players in my first WFRP campaign said that "[I had] been waiting for the system my whole life" in order to express his view that WFRP fit me like a glove.
Posted by Evan at 12:46 PM 1 comment: