More News from the Dark Country

After the most recent G+ session of Nightwick, Antion or whatever had his character participate in a new system I've developed to eat the PCs money and to also give them stuff.  This is part of the result. 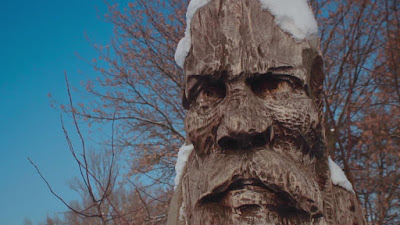 Breaking News
While fishing near his hut in the Fog-Bound Forest, Kozel is approached by a woodsman. He is a young man with a bright face and a nervous smile. He identifies himself as Jurgl and says that "travelers" in the village related to him that when Arnawald the Black Eagle successful sacked Blackleg in a second siege his men found a Temple to "Saint Santa Claus."
Knowing the go-- err... saint was responsible for his defeat at the first siege, he sent his men into the temple to seize the ido-- er... relics inside. They burned the idol after hacking it with axes.
Now the place lies in ruins and is said to be haunted by foul creatures from the Fog-Bound Forest. Perhaps, though, Kozel may find his answers about the "saint" within...

Email ThisBlogThis!Share to TwitterShare to FacebookShare to Pinterest
Labels: the dark country

The Savages of Time 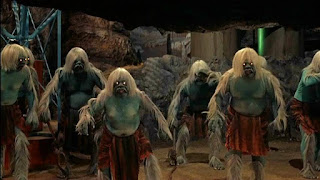 The Savages of Time are heralds of cosmic entropy found in only the oldest ruins on dying and dead worlds.  Their presence seems to erode these ruins such that by the end they are nothing more than foundations.  From Earth the nearest example of their handy work may be seen on Mars, though - due in part to the zigguratic-structure of time, some of the ruins of that planet remain untouched.

They appear as morlock-like creatures - stouter than a man and with imbecilic features.  They are not so much albinistic as colorless.  They have neither art nor legends nor songs.  Their material culture, such as it is, consists only of crude tools for practical purposes.  Even these are prone to break in the hands of non-savages.

Wounds dealt by a savage contain the chill of cosmic entropy.  As such, they may not be healed by non-magical means.  Weapons which strike them must make a saving throw or rust beyond usefulness.  Those made of precious metals do not rust but instead tarnish, reducing their value by half with each failed save.  After four such failed saves the atoms of the weapon scatter harmlessly in a process that is only understood by those who meditate on the impermanence of all things.

Even magic fails in their presence.  Magical weapons used against them must make a similar save (the weapons attack bonus acting as a bonus to the roll) or lose an effect with each strike.  Should all its magic be drained in this manner, the weapon may then be destroyed as described above.  Spells cast on the Savages of Time may never be memorized again and the spell slots used are no longer available to the caster.

Some scholars have speculated about the nature of their spontaneous generation and seeming lack of secondary sexual characteristics.  A mad few have postulated that the savages of time are emanations of a 5th dimensional being best, but still dimly, understood as a god or titan of entropy.  Should such a being exist its presence would only be detectable by use of dispel magic.  Even this would only reveal the parts of the  creature which intersect with the dimensions perceivable by man. In any event such a creature would appear as a shifting mass of colorless bubbles constantly ebbing and flowing, presumably about 30' in diameter.  It would possess the following statistics: AC 15 HD 16 Attacks Beam of Entropy (3d6 damage), Special Cosmic Entropy Move 3/120 (Fly).  Slaying the creature would remove the Savages of Time from existence and may even restore the ruins around them.
Posted by Evan at 6:57 PM No comments:

News from the Dark Country 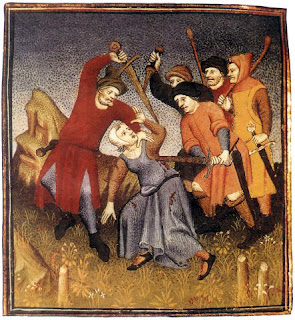 Pictured: The murder of one of Arn's wife's handmaidens by a group of rebels.

News from the Dark CountryWord has reached Nightwick that the villages around Blackleg are once again inrevolt. Arn, Arnawald's son and de facto Lord of Blackleg, is more competent than his predecessor and seems to be managing the situation much better.However, the reports say the rebellion is more organized this time, relying on raids and terror rather than mass attacks. There are dark whispers of coins left in the eyes of rendered skulls and daggers thrust into dead men's hearts. Perhaps it is the work of the infamous Brotherhood.The members of the lodge who pay attention to such things have informed Kozel that the Deer-men have once again retreated into the forest. Signs in the soil around the Abbey make it seem as though their numbers are greatly diminished since their last exodus.The army of Sir Ulrich of Lichtenstein has failed to return from its great campaign in the Witchwood. No survivors have scrambled out in the two years since he left. Those who have gone looking for them, either to help them find their way out or to loot their corpses, report no signs of the Lost Army. The only thing out of the ordinary is some extra activity at the Witchfort.------------------------------------------------------------------

From now on whenever I generate news for the G+ and home groups I'm going to post it on here too.  It might not make much sense to y'all but whatever.
Posted by Evan at 3:41 AM 2 comments: