Just in time for Halloween here's... a Battletech scenario?  Whatever.

This scenario is a conversion of one of Charles Grant's Tabletop Teasers (specifically the Advance Guard Action).

SITUATION
Alexandria is a planet devastated by war.  Once one of the jewels of the Star League, its position on the border between the Lyran Commonwealth and Draconis Combine has meant it is subject to constant raiding.  In November of 3029, these raids came to a head when the Draconis Combine deployed elements of the 2nd Legion of Vega to capture some valuable lostech believed to be on the planet.  House Steiner quickly deployed elements of the 15th Arcturan Guards to intercept.

Both sides planned on engaging in ground north of the ruined city where the lostech lay.  Believing the Legion of Vega to be in control of a factory their, the commander of the Arcturan Guards deployed a recon lance to move north and seize a nearby bridge to use in assaulting the factory.  The commander of the Legion of Vega, believing the Guards hold the bridge, similarly sent a light lance to take the factory.  When the two lances arrived they found that neither position was occupied...

GAME SETUP
Use the Battleforce 2 and Open Terrain 2 maps as shown.  The attacker places 4 buildings within two hexes of Hex 1312 on Open Terrain 2.  These buildings count as being 1 level and indestructible for the purposes of this scenario. 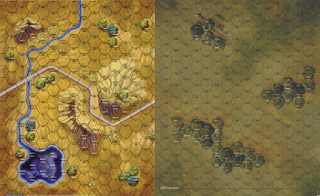 They line up better with my physical maps.

Deployment
The defender deploys their forces along the southern edge of the map.

ATTACKER
The attacker consists of a pursuit lance of the Legion of Vega.

Deployment
The attacker deploys their forces along the northern edge of the map.

VICTORY CONDITIONS
The defender's goal is to secure the bridge as planned with a secondary goal of securing the factory.  The attacker's goals are the inverse.  To secure an area, the player must have a mech within two hexes of its central square and their opponent must not have a mech in the same vicinity.  The scenario ends after 10 turns.

Minor Victory
One side holds their respective objective while the other side's is contested.

Major Victory
One side holds both objectives.

SPECIAL RULES
At the beginning of turn 5 there is a chance that reinforcements will arrive for either or both sides.  When that turn begins, both players should roll 1d6 and consult the chart below.

If reinforcements arrive, deploy them along the player's home edge.
Posted by Evan at 10:12 AM 1 comment: