What follows is a new profession for Aquelarre, the Nigromante (black magician or "necromancer"). When I did my graduate-level work in medieval studies, I did a great deal of research on the figure of the nigromanticus in 13th-century texts. My knowledge leads me to believe they'd be rarer by the time Aquelarre takes place but extant texts certainly hint at their survival. My favorite historical example is Eustace the Monk, though Michael Scot is probably a more prominent example. Philip the Bloody's name was taken from a nigromanticus from the works of Caesarius of Heisterbach.
Note that the nigromante uses the default rules for professions rather than the stricter rules for invented professions. This is because it is invented by the GD and not by the player. Those wishing to include it in their games should allow a character of the lower nobility class who has rolled cleric for their occupation to choose this instead or perhaps assign a second die roll to determine which it is (1-7 cleric, 8-10 nigromante). 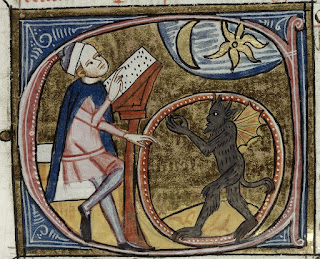 Nigromante
This profession can be followed only by male characters.
The nigromante is a specialized form of cleric (almost always a canon) who has decided to devote his energies to studying demonology. While many insist that they begin such studies in order to perform exorcisms, they are usually viewed as something like the educated version of a bruja. Toledo is infamously their training ground, due in no small part to its school of Arabic translation. Because of this, the nigromante is something of a combination of the Christian cleric and the Muslim mage. In the 13th century, they were shockingly common throughout Europe, but crackdowns and book burnings have left them much rarer in the time of Aquelarre.
Minimum Characteristics: Culture 20, Perception 15
Primary Skills: Language (Latin), Magical Knowledge, Read/Write, Theology
Secondary Skills: Alchemy, Discovery, Language (Arabic), Astrology, Medicine, Memory, Teach, 1 Arms skill of Noble Category

Monthly Income: 350 maravedies, but may opt to add their % in Magical Knowledge at the risk of suspicion of sorcery.
Posted by Evan at 10:48 AM 1 comment: