Making a Medieval Sandbox Campaign Part I: The Importance of a Party Concept 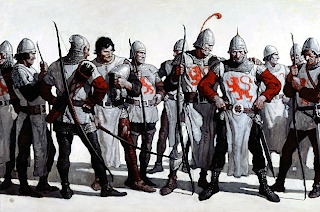 This is a topic I've been thinking about a lot recently, since I'm working on Feudal Anarchy.  I've run a surprisingly high number of sessions in my fictionalized version of the Languedoc and its accompanying island of Cocanha, and I think I've started to get a handle on what works and what doesn't.  For the purposes of this post, I'm going to focus on what Chris calls a local sandbox, since that's the kind of game that I've been running and the one I'm most likely to run with this system.


One thing that I think is very important is making sure that the group has a sort of "party concept."  This needs to be something that can tie the player characters together and that allows them to either move within feudal society or sets them outside of it.  Examples include a group of closely allied nobles, a company of mercenaries, a family of nobles and the mesnie, a group of roving outlaws, or even the inhabitants of a particular village.

The party in the Cocanha game is primarily composed of a group of knights and mercenaries who operate a keep and a number of small manors in the eastern part of the island.  I've found this to be a remarkably broad concept, since characters that don't otherwise seem to fit are usually explained as members of the mesnie of one of the knightly characters.  I could see other group concepts being similarly broad.  Even something as apparently narrow as the inhabitants of a Cistercian abbey might be broadened by including characters who did any number of things before becoming tonsured, characters who are wards of the abbey, or even inhabitants of a nearby village or manor belonging to the abbot.

The reason that party concept is important - more important than it is in other types of adventure games - is that the medieval world is a great deal more rigid than most fantasy settings.  While there was probably a larger degree of social mobility than one might expect, there was a far stricter sense of hierarchy, and if the players and referee want to maintain a "hardcore medievalist" tone, it is useful to explain why their characters are associating with each other.

More importantly, the party concept can help motivate the PCs to seek adventure and make it easier for the referee to construct scenarios.  For example, knights and nobles are likely to want to improve their station and win more territory, and this may motivate the group to be more belligerent and the referee can then focus on either presenting opportunities to gain land or status or on presenting threats to the PCs' holdings.  Outlaws will, obviously, be interested in precious lucre, and so the group will constantly be looking for tax collectors to rob and other such sources of coin, and the referee knows those are the sorts of thing he or she should be presenting to the players.

In the next installments of this series, I hope to talk more about constructing the campaign region, creating and running the political struggles of that region, and the other sorts of adventures one can have in a heavily medieval setting.
Posted by Evan at 6:29 PM 3 comments:

Heresies of the Dark Country 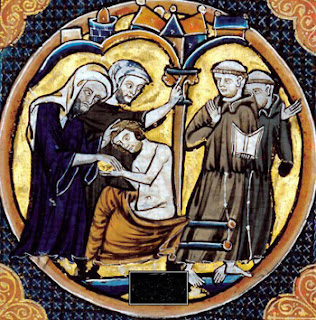 The Church of Law demands complete submission from its adherence and thus it is both interested in orthopraxis and orthodoxy; however, it is difficult in a world where civilization inhabits such a small sliver of reality as it does in the World of Nightwick to maintain a consistent ideology.  This is especially true in border areas such as the Dark Country, where the grip of Law is weak.  As such, a number of competing views of the God of Law have developed.  An incomplete list is provided below.

Dualists believe the God of Law is both a cube and a sphere simultaneously.  For some reason that mainstream Church scholars can't understand, this has led them to only eat nuts and to avoid children at all costs.  Some believe that humans may be reincarnated, but they only get this second chance to Submit.  If they fail this second time, they are cast into the Pit.
Limners believe the God of Law is a line of inflexible width.  They often identify other members by making secret linear signs in the air or in the sand.  They are surprisingly common among the ranks of the lower clergy, and these churchmen believe that the Church has been too lenient in persecuting pagans.
Escapists believe that the World is in fact the dream of beings from an even more miserable reality.  They are a sad lot.
Xagygians believe that there are not three alignments but nine, and they emphasize morality and social justice to a degree that sickens mainstream Church officials.  They also divide demons and devils into separate entities and have the gall to declare that devils are Lawful!

Impositionists believe that the God of Law did not make reality, rather it already existed as the chaotic mass in which the demons and Old Gods lived.  They claim that the God of Law looked upon this horrifying, chaotic swirl and imposed Order on it, creating the World as we know it.

Solarists believe the God of Law is a glowing yellow circle that flies across the firmament every day bringing warmth and light to the benighted World.  For evidence of this, they simply point to the Sun.  Many scholars believe this position is heavily influenced by the paganism espoused by the dreaded outlaw Yim Yimsley, which would explain its prevalence in the poorer communities of the Dark Country.

The Devoured are actually a chaotic mix of heretics that all have one trait in common: they believe that one or more of the monsters that inhabit the World of Nightwick can actually be saved and join the God of Law on the Mountain of Heaven.  They supposedly enter dark forests and dank caves looking for converts, and their name refers to their presumed fate.

Note that all of the above names are not words which the heretics would use to identify themselves.  They almost always claim to be members of the Church of Law and have their own terms for the Church, including Devil Worshipers, False Prophets, and assholes.