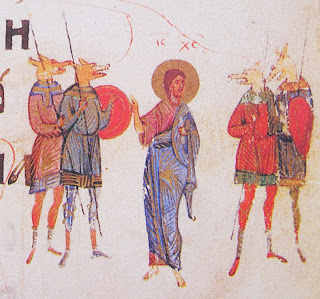 This depiction of the "Apostle to the Dogheads" is... wrong

Dogheads were men once, and perhaps they still are.  In some barely remembered time before the creation of the Realm of Man, perhaps even before even the Empire, there was a shinning kingdom of men far from the Middle Sea.  Some say it lay south of the Desert Lands, but others say it was somewhere in the jungles of the Land of a Thousand Idols and some say it was in both and neither.  Wherever it was or wherever it wasn't it was ruled by a wise king.*

In some tomes it is claimed that it was this king who first heard the Law, but such a belief is the rankest of heresies.  More conservative theologians who still believe the City existed before the Empire merely state that he could sense the great thrumming but not hear it as the Lady Could.  This has kept them unburned... so far.  In any case, he built the City.  The City was the jewel of the world before the Realm came into being, and it is said to have sparkled for a thousand years - supposedly the unnatural length of the wise king's life.

It's people became decadent and, as people without the light of the Law are wont to do, began to worship strange beings they believed to be gods.  The wise king warned them of their folly, but they did not listen.  Some say the high priests of the nameless god of the dogheads ate the king alive, though some say he still lives.  At the very least, they bit him, and for this they gained the heads of canines - whether as a curse from the God of Law or as a divine boon from their nameless idol none can say.

The City fell into ruin without its king and its (now dog-headed) people were set to a life of wandering.  Somehow, in the time of the First Emperor and the Lady, they came to the Steppe which lies east of the Dark Country.  They burned the human settlements that lay on the Steppe's edge and devoured the people there in the name of their nameless god.  Then they came over the Nameless Mountains.**  The legions beat them back but did not follow them into the Steppe, and they have lived their ever since.

They are a plague on the Dark Country.  They come in great raiding parties down the rivers and through the passes and burn and eat the men they come across.  By the reckoning of the pagans and even most Realmish settlers in that benighted land, they are actually not beast-men.  They seem, in their way, to have a language, a culture, and even two sexes.  Aside from their cannibalism(?) they act not unlike the raiding pagans of old.

There are three known types.

Lesser Dogheads (N) AC 15 HD 2 Attacks Weapon Special None Move 12" The average doghead.  Rarely seen outside of the steppe.  Use spears, shields, and small compound bows to defend their tents.

Greater Dogheads (N) AC 16 HD 4+1 Attacks Weapon (+1d6 damage if melee) Special None Move 24" Taller than a man by half.  Scamper on too many legs in an unsettling fashion.  Fond of compound bows and scimitars.

Doghead Chieftans (N) AC 16 HD 5+4 Attacks Weapon (+1d6 if melee) Special See below Move 24"/24" (Fly)  As Greater Doghead but with two heads (often one male and one female) and two crowns.  Can fly, become invisible, and breathe fire (8d6 damage, save for half) at will.  They may charm person or monster and create a sphere of darkness once per day.  Some may be able to turn into human form but are loathe to do so.  They will retain their second head but will hide it with a cloak.

*Some blasphemous sources record his name as Prestor Ultron, but only in Zenopolis.  All such records have been burned on the orders of High Pontiff Burgos the Sullen shortly before his passing.

**Some hold that the Nameless Mountains are named after the Dogheads nameless god.  This assertion is ludicrous.
Posted by Evan at 12:01 AM 1 comment: