Thoughts on D&D and Wargaming

When I was in high school, I was in a club called the Military History Society, which was really a euphemism for a wargaming club.  We met in the library about once a month to fight battles from various conflicts - though the only scenario I can remember that didn't involve American soldiers was set during Operation Barbarosa - using the teacher/organizer's miniatures.  Most of these were, due to the nature of his collection, horse and musket era affairs and I usually try to convince everyone to let me be a cavalry commander.  I only succeeded in doing this one time, and then only because there were so few participants that even the teacher had to double as referee and general.  In my crowning moment of glory, I ordered a charge into a number of disorganized blue-belly reinforcements that had just gotten off of a train, pinned them against it, and destroyed them.  It was a good day.

But I didn't decide to write this post in order to wax nostalgic about playing wargames.*  What I remember about those games is that the organizer almost always brought a photocopied set of rules with a number of marginal notes and house rules that anyone used to the tournament environments of post-Games Workshop wargames would balk at.  It occurred to me several months ago, during one of the infamous Hill Cantons after-session-bull-sessions, that these documents must have been very much like the wargaming climate that created OD&D.  The rules were more of a set of suggestions for the individual clubs, like primitive roleplaying groups, used to create their own scenarios.

Recently I've been reading a number of "old school" wargaming books - Charge! Or How to Play Wargames by Peter Young, The War Game Rules and The Wolfenbuttel War by Charles S Grant, and Napoleonic Wargaming by the original Charles Grant - as part of my ongoing imagi-nations project. One thing I have observed in them is the fact that they fully expect the rules to be modified and often say so, much like one sees in the text of OD&D.  Napoleonic Wargaming is almost a set of guidelines for making a wargame than a complete game, though a "summary of the rules" section does present something that is somewhat coherent as a game.

Another thing that I noticed was the similarities between these various rules, but also their tiny differences.  It is not unlike, at least to my mind, the differences between Holmes, Moldvay/Cook, and Mentzer, even if those products came at a time when D&D was designed to be much more uniform from table to table.

I say all this because I believe that if the OSR has really "won," a phrase I have seen in a strangely high number of places, it is because so many groups have returned to this model of gaming.  One only has to look at the blog list over to your right to see several examples of this sort of thing in action - DMs and their groups customizing a very similar set of rules to achieve different experiences.

*Actually, I totally did, but I have another point too.
Posted by Evan at 7:44 PM No comments:

The mocking ones are strange creatures born eons ago in the great underworlds of ancient Mars.  In the distant time before the Deluge, they may have come to Earth through any trades humans may have once had with the martians, or simply on martian warships.  On Earth they live much as the did on Mars, squatting in underground ruins and caverns of suitable size to support their eating habits.

They appear as enormous balls of pallid white flesh with rudimentary eyes and mouths.  Their arms are little more than flippers or rude tendrils covered with a milky yellow substance.  Their legs are thin and strangely black and squamous, ending in sharp talons.  They are known for their strange gait, which is obviously caused by their unusual body shape.

Mocking ones are master mimics of sound, and can produce a wide variety of noises through the strange undulations of their mouth and vibrations from deep within their fleshy mass.  Sight unseen, it is nearly impossible for humans to differentiate the sounds made by a mocking one from those made by the thing they are imitating.  Since they tend to live in underground/dungeon environments, the sounds they produce range from such things as doors slamming, humans screaming in agony, the bellowing of ancient monsters, or the din of battle.  A group of these creatures would make a strange set of sounds indeed!

These calls are typically used for matting, with particularly hard to replicate dungeon sounds presumably being more impressive to the females of the species.  It also sometimes has the effect of luring in prey, which mocking ones typically first subdue with their paralyzing flippers (paralyzation lasts 3d6 rounds, though a subsquent save made while still paralyzed may lengthen this time to 3d6 turns).  After all creatures are paralyzed, and not before, the mocking ones will begin to slowly dismantle their meal with their claws and mouth, dealing 1d3 damage each round.

Fable of a Failed Race 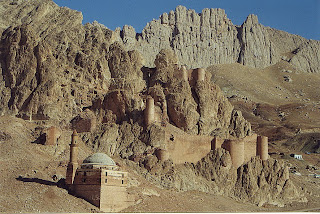 When Uz of Uz First King of Uz found the Fuel-Less Fire on the banks of the River of Life, It told him of the marvels and wonders of the Desert of Demons and the Worlds Beyond Counting.  With the Fire's words he lived many lives in strange lands on strange worlds.  When the Fire's words ceased he built the First City of Men.

But there was one place in all his lives that he did not tread, for the Fire had warned him.  North of the Sea of Salt was, and is, a land that is the dwelling place of Mot, and no man should venture there.  But men did.  There they built a city.  Jerah, City of the Worm squatted hideously on the banks of the Sea of Salt.  The men of That Place dealt in death and their ghoul-priests reveled and sang litanies to He Who Must Be Obeyed, a strange and almost forgotten aspect of the Dweller in Darkness.  They said He taught laws older than time, older than Fire.  The Laws of the Fretting Worm were harsh and demanding and the soldier-fanatics of Jerah spread them as far as the Almodad, the Jewel of the Desert.

The women of That Place bore an intolerable yoke the likes of which is unseen in this day even among the savage Phutians.  Daily were members of their sex cast into His maw and great and terrible was their suffering.  In their sorrow and horror they called out and they were heard by Li-Lit of the Night.  For the first time She Who is Over Her Slaughtering Block came down from the high mountains with daggers of light.  She struck at Mot and thus did Death strike Death.  In the City of the Warrior Women, known to the men of Uz as New Jerah, they say that She Who Devours Infants made Mot blind and cast him back into the Dark.

Now Jerah is no more.  The ruins of that smashed city still remain like bleached bones on the shore, but only fools venture to the place where He Who Pulls into His Gullet dwells.