Do You Want to Die in a Hole?! 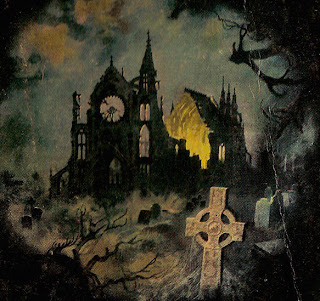 Do You Want to Die in a Hole?!Nightwick Abbey has lain in ruins for almost two centuries.  Built by power hungry knights and mad wizards, it now is home to only ghosts and goblins. Peasants refuse to work in the shadow of the ruined church, and at night eerie lights issue forth from its depths.  Many have tried to wrestle gold from the crypts which lie beneath, but few have returned.  Are you brave enough to seek your fortune in a demon-haunted dungeon?A ConstantCon game using the Swords and Wizardry White BoxPlay is from 8:30 - Midnight CT every Monday. This is not a FLAILSNAILS game.  You'll need a new guy for my precious-setting-shithole-hellscape.

Email me at evanDOTvanDOTelkinsATgmailDOTcom if you're interested.
Posted by Evan at 12:16 AM No comments:

Email ThisBlogThis!Share to TwitterShare to FacebookShare to Pinterest
Labels: Nightwick Abbey, the Search for Players 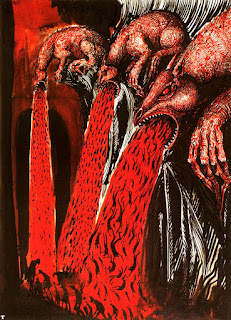 At the bottom of space there is a Dragon.  Its mouth gapes wide, fangs bared, gouts of flame spiraling up into the void.  It is written that the river Acheron, which once brought life to the people of the Desert Lands in the eons before the founding of the Empire, flows through the World and down the throat of the Dragon, pooling in the first of its thousandfold terrible stomachs.  It is in that boiling morass of mud and hate and fear and fire that the souls of the damned first enter the Pit.
This is the realm of the Fishers of Souls. Horrid and hideous, blind and lame, they are the lowly smiths of Hell’s great armies.  They wade through the searing muck to find larvae - the debased form that the souls assume upon first entering the nether-realms.  These they grasp with great hooks of bone and sorrow and drag to the strange “forges” of Hell - vats and other devices too alien to man for our kind to understand their use.  It is in these that demons are made, and thereby those who sought to gain the favor of the Lords of the World are set to suffer with them in chains in the belly of the Dragon.

Most of these souls a changed into lesser fiends - such as imps or familiars - or gather together into a host of fiends with the power to possess mortals.  There are certain souls, however, of special wickedness that they are elevated into the Pit's great hierarchy.*  The forges change them in ways which reflect their diabolic masters.

These are the Knights of Hell.  Four types are described below.

All Knights of Hell may only be wounded by silver or magic weapons since they are not of this plane.  Holy water is also sovereign against them.

Should a single Knight of Hell possess a man that man will not become a cadaverite in the normal fashion.  Instead his body will warp to take on the aspects of the demon that possesses him. Eventually he will become a physical manifestation of the demon with double the normal Hit Dice.  However, this physical body also means that he can be wounded by normal weapons.

All Knights of Hell reform in the Pit if defeated on the material plane unless special lawful weapon are used.

If forced into a magic circle, all Knights of Hell will teach one second level spell (roll or pick based on the most appropriate for the nature of the demon). 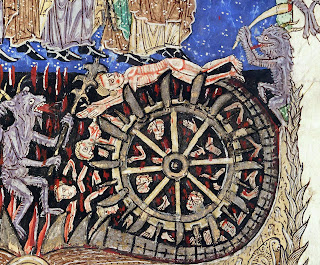 Knights of Armadeus appear as great carrion birds of enormous size - nearly the size of a draft horse, or as a great shaggy beast of diabolic aspect.  In either form they have the power of flight.

They may dispel invisibility at will.  Once per day they can create 10' of darkness and locate any object relating to an arcane or secret matter within 4 hexes of their current location

If forced into a magic circle, their form will change to that of a spectral warrior with black skin, black teeth, and black eyes.  In this form they may locate objects, and speak the true names of lesser fiends for the creator of the circle. 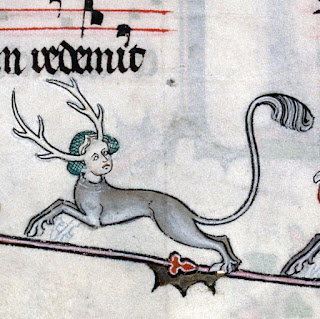 Knights of the Horned One appear in the form of satyrs, rams, bucks, and he-goats.  Sometimes these have the heads of animals, other times the heads of men.  They are always horned.  In none of these forms may they fly.

Knights of the Horned One may cast a powerful charm against persons (-2 to save) or monsters (no modifier) at will.  Once per day they may hold person, teleport from one spot shaded by a tree to any other within the confines of a hexmap (Judges Guild or ACKS regional sized), and may locate any object pertaining to a carnal affair within 4 hexes of their current location.

If forced into a magic circle, they will change into an angelic form of the animal they most resemble - or, in the case of a satyr, a strangely diminished angel.  In this form they will charm an object of the magician's lust, carry him to a shaded grove, or locate an object associated with his heart's desire.

Knights of the Horned One often engage in carnal acts with witches and warlocks.  The result of these acts will be stillborn until the sixth time, when it will grow into a devil-man. 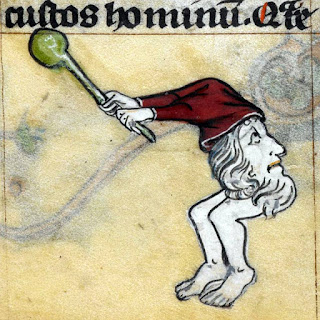 Knights of Ozgin appear in a riot of forms, even for demons.  Most are vaguely mannish, though only in the broadest sense.  Their faces and limbs are twisted or multiplied in strange ways such that any semblance to humanity is difficult to tell.  They clothe what parts of their body can be clothed in raucous colors that are sickening to the eyes.  In no form may they fly.

Knights of Ozgin may become invisible or make one individual invisible at will.  Once per day the knight may create a phantasmal force. render a victim maddened (-2 saving throw or perceive friends as diabolic foes that must be slain), or locate any object related to deadly madness within 4 hexes of its current location.

If forced into a magic circle, a Knight of Ozgin will become a billowing rainbow of colored smoke.  In this form it will always lie to the caster, but usefully the statements are always the precise opposite of what is true.  They will madden the magician's foes at times which would most likely lead to siblicide. 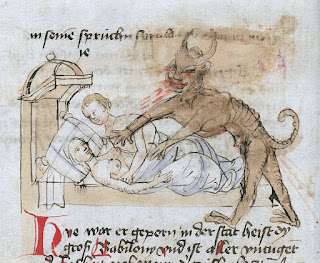 Knights of Moloch appear as bulls or minotaurs belching fire and smoke.  In either form they are priapic.  Only in the forms of bulls may they fly.

Once per day they may create a fireball, teleport from one furnace to another within a hexmap, protect another individual from normal missiles, and locate an object related to the murderous arts -both clandestine and martial - within a 4 hex radius.  They may belch forth flickering lights at will and their touch burns like fire (advantage on damage dice).

If forced into a magic a magic circle, their penis will vanish and their smoke and fire will die away.  Blood will poor from their orifices in a most disturbing manner.  In this form they may instruct in the use of weapons, reveal the names of murderers, will carry the caster from furnace to furnace (caster is not immune to damage from this effect), and will locate objects as described above.

Notes: the semi-assumed max-level for Nightwick characters is 10.  Since it is so reliant on medieval and horror movie imagery, I decided it was useful to begin the ranks of demons at much fewer hit dice than Vrocks.  Example barons, marquises, dukes, princes, presidents, and great kings of Hell will be discussed in due time.

*It must be remembered that the Pit's supposed hierarchy is an imposition by man on pure chaos.  In fact, some dangerously heterodox scholars claim the demons described above are so "regular" only because they must conform to man's perception.
Posted by Evan at 7:52 PM No comments: