Poison for Body and Soul 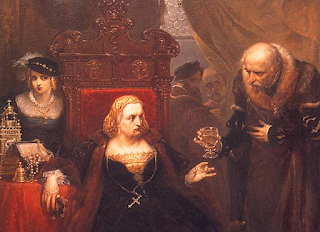 The mechanics for poison in the World of Nightwick are not dissimilar to diseases, though the saves occur at shorter time intervals.  Hiding poison in food or drink increases the time between saves by a degree, thus a round becomes a turn, a turn becomes an hour, and so on.  Hiding poison in food or drink well requires special skills and increases the time interval by two orders - a round to an hour, for example.

Should the victim of a poison or a disease ever successfully make three saves in a row, they move to an earlier stage.  If this occurs at stage one, the poison passes out of the character's system harmlessly.

A second dose of poison will cause an immediate move to a lower stage regardless of time interval.

Basilisk Venom slowly turns its victims into a stone statue, which the creature then unhinges its jaw and grinds in its gizzard for sustenance.

Stage 2: One or more limbs turned to stone.  -4 to all actions (regardless of associated ability scores), and move reduced to 3.  Save each round or move to stage 3.

Stage 3: Body is now mostly stone.  Must make a saving throw to perform any action other than screaming.  Make a save once each round or become a statue.

Giant Centipede Venom is typically meant for smaller prey than humans, but can be fatal for unlucky individuals.  Saves against centipedes of smaller than man sized have a +2 bonus.

Stage 1: Area of bite swells and becomes extremely painful.  -2 to all actions involving affected area.  Make a save each hour or advance to stage 2.

Stage 2:  Bite swells and muscles begin to cramp.  -4 to all actions.  Make a save each hour or advance to stage 3.

Stage 3:  Body is completely paralyzed.  Save every turn or die of suffocation.

Giant Spider Venom varies based on the type of spider.  The one described below assumes a spider whose bite causes necrosis.

Stage 1:  Strangely painless red welt appears.  Make a save every turn or advance to stage 2.

Stage 2:  Lose 1 hit point as welt bursts to reveal rotten flesh beneath.  Magical healing will only restore 1 hit point until poison exits system.  Make a save every day or advance to stage 3.

Stage 3:  Rot grows to cover most of limb or torso.  -4 to all actions.  Make a save each hour or die of toxic shock.

Lotus Powder comes in a variety of colors and is produced in the Land of One Thousand Idols.  The entry here is for black lotus powder, which is commonly found in traps.

Stage 1:  Vision blurs, brain fogs.  - 2 to all mental actions.  Make a saving throw each round or advance to stage 2.

Stage 2:  Character swoons.  Can be roused for 1d4 rounds before swooning again.  During waking periods character takes a -4 penalty on all die rolls.  Make a saving throw each turn or advance to stage 3.

Stage 3: Character falls into coma filled with unearthly visions.  Visions are always positive to the character, but their heavenly or hellish nature depends on their alignment.  Make a saving throw every week or perish.  Returning to stage 2  or magically neutralizing the poison is the only way the character may be roused.

Froad Poison is secreted by the strange creatures that live in the swamps.  It is extremely potent to all humanoids except Froglings and Bullywugs, which are immune to its effects.  All other creatures have a -4 to related saving throws.  Oddly, the poison of a Driffit is very similar in effect, but does not force the penalty to saves.

Stage 1:  Muscles tighten and breathing becomes laborious.  - 2 penalty to all d20 rolls and -1 to all d6 rolls.  Make a save each round or advance to stage 2.

Stage 2:  Muscles continue to tighten and heartbeat becomes shallow.  -4 to all d20 rolls and d6 rolls are impossible.  Movement decreases to 6 and is impossible in armor.

Stage 3:  Body is completely paralyzed but hideously aware.  Saving throws to return to a lower stage are made once a week.  Otherwise the victim will remain in this stage until they perish from exposure or other causes.

Wyvern Venom, while potent, is slower acting than other forms of venom or poison.  Wyverns prefer to fly down, sting an opponent, and then fly away and follow it until it perishes.

Stage 1:  Area swells and becomes excruciatingly painful.  -2 penalty to all d20 rolls and a -4 penalty to rolls involving the afflicted limb.  If stung in the leg, movement is reduced to 6.

Stage 2:  Blood begins to thin.  In addition to the effects of Stage 1, a save must be made to perform any physical action.  On a failure the character swoons for 1d4 rounds.  Make a save each day or advance to stage 3.

Stage 3:  Character collapses into a coma.  A save must be made each day or the character dies - assuming they are not eaten by a Wyvern before then. 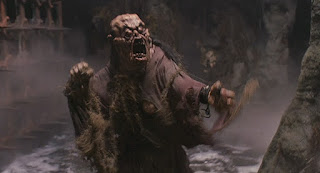 An Advanced Case of Possession

Possession works much the same way as poison, a fact that has not escaped sermon writers in the Church of Law.  The most common type of possession, a host of fiends, is described below.  More powerful possessors will inevitably be related to a demon lord and will be described at a later date.

Stage 1: Character is encouraged by strange voices to participate in vile acts.  +2 bonus to all actions made in accordance with the voices' desires.  If the act is particularly heinous (referee's discretion) then a save is immediately called for to advance to stage 2.  Otherwise, the save is made each week.

Stage 2:  Voices become demanding.  Instead of providing a bonus, a -4 penalty is incurred by following any course not advised by the fiends.  As with stage 1, a save is made either when a heinous act is committed or when a week passes.  If the save is failed, proceed to stage 3.

Rules for exorcisms will be forthcoming, as they are more complicated than neutralizing poison or curing disease, but they may only be successful if the victim is at stage 3 or lower.

Note: this section repeats the basilisk venom information from above to make it easier for referees to use without referencing this post.

Basilisks in the world of Nightwick are actually snakes of sinister aspect.  They have night-black bodies except for the small, crown-like protrusion from the top of their head.  They are found most commonly in the Desert Lands, but in warmer months they plague the Dark Country and Iron Kingdoms.

Basilisk Venom slowly turns its victims into stone, which the creature then unhinges its jaw and grinds in its gizzard for sustenance.

Stage 2: One or more limbs turned to stone.  -4 to all actions (regardless of associated ability scores), and move reduced to 3.  Save each round or move to stage 3.

Stage 3: Body is now mostly stone.  Must make a saving throw to perform any action other than screaming.  Make a save once each round or become a statue.

Basilisks are sacred to the Demon Prince Apollo, as are all serpents.  They have been seen ruling courts of snakes in the desert, devouring those that displease them.  Whether or not the snakes are intelligent or if they are merely vessels for intelligent demons is as yet a mystery.
Posted by Evan at 2:18 AM No comments: