New year. New blog post.  This one is about Star Wars.

I recently watched the original trilogy with my wife, who had never seen a New Hope or Empire and hadn't seen Jedi since she was a child.  She loved them, and I was reminded of how much I loved them.  Hence this campaign idea.  I hope to run something like it later in the year, but right now I'm running WFRP again in Middenheim, my favorite fantasy city, and I am hoping that campaign will last long enough that this one can't start anytime soon. 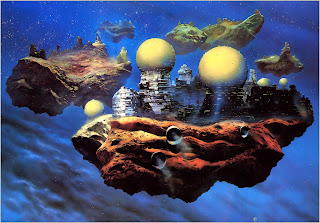 Goti Station was once a mining colony on the outer edge of Hutt Space.  It is essentially a collection of asteroids connected by durasteel struts and turbolifts.  In the first years after Palpatine declared the New Order, a crime lord named Borba the Hutt* purchased the colony as well as a number of very large hyperdrives.  He affixed these to Goti Station and shot the entire thing into deep space, far from any star.

Borba now uses the station as a mobile command center for a vast, and territorially disparate, criminal empire.  Goti Station floats in the blackness between systems, making jumps to crucial junctures between planets and then moving on before imperial agents can catch the scent.  Their are sometimes complications, like asteroids tearing off in hyperspace, but nothing so great as to deter Borba's plan.

The PCs are fugitives from the Empire - force users hunted by the inquisition, bounty hunters who violated proper jurisdictional codes, princes who made enemies of a Grand Moff, etc.  They have made their way, through the use of contacts or through Borba's actively seeking them out, onto Goti Station.  In exchange for credits (or more likely Borba's company scrip) and refuge form the Empire, the PCs must perform services for the various miscreants who run the station.

These typically take the form of adventures on planets near the current location of Goti Station.  The GM (i.e. me) will create 1-5 hooks each for 2 to 3 nearby planets.  A single hook may be an isolated adventure, a connected mini-campaign comprised of multiple hooks on the same planet, or part of a web of scenarios that includes multiple planets.

Whenever the PCs kick the hornets' nest of Imperial Law Enforcement too hard, Goti Station will have to jump somewhere else and a new list of hooks will be created.  Should they decide to kick the hornets' nest, pick it up in their hands, and proverbially rub it on their genitals, then the Empire may very well find and attack Goti Station, forcing the PCs to either fight to defend their shitty home or to leave it in search of a new hiding place.  The later option would necessitate a new campaign model, but since it would develop organically out of the players' actions I think that could work.

Typical threats would include gross crime lords, trandoshan slavers, bounty hunters, imperial inquisitors, dark side prophets, and the robed weirdos of the Emperor's ruling council.  Why those guys?  Because those guys are why I like Star Wars.

*Borba is not actually a Hutt.  He is a Tarsunt that underwent extensive genetic modifications in order to be accepted by Hutt crime bosses on Nar Shadda.  His hideously bloated form must now continually float in a bacta tank or he will die.
Posted by Evan at 1:23 AM 1 comment: