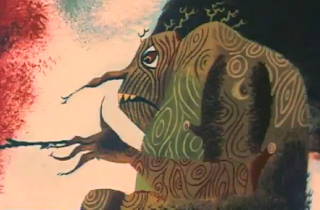 Groans are immense anthropophagi that lurk in the benighted forests of the Dark Country.  They appear as immense bulks roughly 10' in height that terribly combine the aspects of both men and trees.  They stalk through the forest searching for their favorite food: man-flesh.

Groans loathe humans but love their meat.  Their hatred comes primarily from the practice of farming, which groans feel is the equivalent of genocide or slavery.  To the groan, digesting any vegetable matter is murder.  This is not to say that groans are moralists, for they are slow witted creatures whose primary pleasures in life involve disemboweling human victims.

In their natural environment, groans are incredibly stealthy.  When in a forest at night, they surprise opponents on a 1-5 on 1d6.  They will occasionally parley with potential meals, but only if it is very clear that the party in question has not recently eaten fruits or vegetables.  Otherwise, they will attempt to devour any humans or demihumans they see on sight.  Even if there is no evidence that the party in question has eaten any vegetable matter, on a reaction roll of Uncertain or worse the Groan assumes they have and attacks anyway.

Groans fear fire and they fear the sun even more.  Groans always take full damage from fire-based attacks and always catch fire if that result is possible.  When hit by the rays of the Sun, a groans feet bury deep into the ground and the groan becomes little more than a dried up dead tree.  It is said that the White Lady knows the ancient magic by which these trees can be turned back into groans, but most woodsmen agree this is a rare event.  It is also the general consensus that this solar problem, combined with their general slow-wittedness and their small numbers, that keep the groans from attempting to stamp out all of human civilization.
Posted by Evan at 8:32 PM