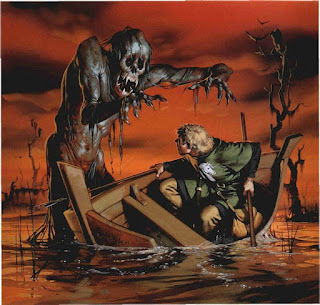 Boggy-men are loathsome creatures that make their lairs in marshes, swamps, and bogs.  They appear as emaciated humanoids with shockingly funeral features, despite the fact that they are not undead.  Their skin is sickly green and rubbery.  Their eyes are glimmering marsh lights.  Their mouths are foul holes, toothless and suckered.  Scholars, who are the only ones who concern themselves with such things, believe boggy-men to be one of the many hideous types of fairykind.

Boggy-men await their prey in muddy streams and other murky waters.  When a hapless victim strolls near, they lurch out and attempt to grab them.  The bogg-man makes a to hit roll and if successful the creature is grabbed and can take no actions other than attempting to break free.  The boggy-man will then plunge its victim into the water, and thereafter the poor sap will take automatic damage each round (1d6) as his or her lungs quickly fill with water.  Humans and demihumans thus slain become boggy-men within 1d6 hours.

An extremely cowardly and craven race, boggy-men will usually try to avoid fair fights.  Once they have an opponent grabbed, they will try to take him or her out of the reach of any companions who might be able come to the rescue.  If the creature finds itself cornered and isn't currently engaged in drowning a victim, it will fight with its claws or attempt to flee to its lair.  Boggy-men typically lair in rotten trees or mucky holes far away from the more frequently traveled areas of the swamps they haunt.  Here they may be accompanied by their wicked progeny.  They will also have an amount of treasure taken from unfortunate passersby, for they live all things that glitter and shine.
Posted by Evan at 12:00 AM