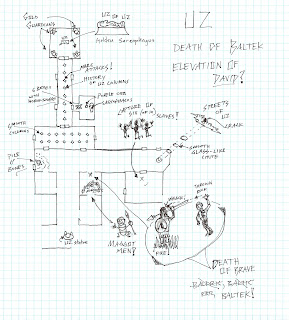 Friday I ran Uz again for the first time in several months.  I've decided to run a minicampaign in which the PCs explore the undercity beneath Uz's acropolis.  For this session, I had only one "point completed," and I let them know that upfront.  Luckily, they didn't find any of the level's exits so it was a non-issue.  Anyway, here are the good bits from the session:

Anyway, I had fun and I hope the players did too.  This session has made me rethink some (fairly minor) things about my presentation of Uz, and I think that's a good thing.  Hopefully I'll be running another session next Friday.
Posted by Evan at 7:45 PM