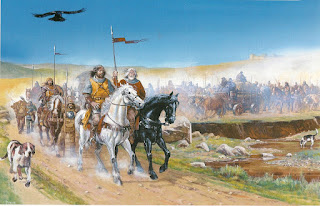 I've written and rewritten this post several times since January(!), Part of the reason for my finding this post difficult is that I'm discovering that I have not quite yet mastered the art of making this type of setting for my own game, and as I continue to work on Feudal Anarchy I'm figuring out new things that work and don't work (mostly don't work).  This is an attempt to distill all of that information in a way that is useful to others.

Most RPGs, and Feudal Anarchy is no exception, are action-adventure affairs.  This means that PCs tend to be violent people doing violent things, though campaign events, tone, genre, and player agency is ultimately the determiner of whether these actions are those of noble heroes or venal murderers.  In either event, it is best to make sure that the place you set your medieval campaign is one that will provide this kind of adventure.* Periods within the Middle Ages that are characterized by the consolidation of centralized power and improvements in administration - while not to be totally avoided - are less suited to this sort of game than those characterized by petty struggles.  For example, the Anarchy will provide more room for adventure than the reign of Henry II.  Other examples of places/periods that will produce this sort of environment are France under Louis the Fat, the Albigensian Crusade, and Iberia during the Reconquista.  It should be noted that more peaceful periods, such as the aforementioned reign of Henry II, may also be used as "peace" in medieval terms is considerably more violent than one would expect.

In addition to providing excitement systemic violence has another benefit: it creates a chaotic situation whose outcome is more easily affected by PC action.  The turmoil that politically characterized much of the 11th and 12th centuries means that a few people with sharp minds and sharp swords can do quite well for themselves.  One might think of the likes of Bohemond of Antioch, William Marshal, or Eustace the Monk to see what I'm talking about.

Feudal Anarchy is currently focused on representing fairly small sandboxes - typically no bigger than a county.  When designing one for your game, it is important to keep this scale in mind, and there are several advantages to keeping it small.  The most readily apparent to me while running the game has been that the players get to know their lieges, vassals, and other NPCs very well and that the interaction between them can easily be used to generate adventures with very little effort on the part of the GM.  The small scale allows these relationships to be manageable without the world feeling strangely sparse.

However, be careful not to make it too small, or to make the obstacles that exist in the setting to easy for the PCs to topple.  This was the problem I ran into with my Cocanha campaign.  For this type of campaign to really work, the aforementioned relationships with NPCs need to provide adventures for a long time.  If the villains are too easily disposed of, you start to run out of options very quickly.  Another thing to avoid is setting it on a small island.  What I found very quickly was that it was difficult for me to introduce new threats because I'd have to explain how they got on this tiny little island without anyone noticing.

This brings me to another point: you want the small sandbox to feel like it's part of a larger world.  Partly, this is to allow an influx of new adventure seeds once the campaign is already going, but an even larger part has to do with the genre.  If you're playing a "hardcore medievalist" RPG, you want to rub shoulders with the likes of Richard the Lionheart, Thomas de Marle, or Ermengarde of Narbonne.  That's part of the appeal.  If your setting is too small and isolated, it's difficult to explain why those kinds of historical celebrities to show up.

Border areas, while not the only type of place that works for this sort of thing, strike me as ideal.  They are almost always in turmoil, with at least a sort of light warfare in the form of raiding going on on both sides of the border.  They are typically politically important enough that famous people, particularly kings or magnates, will visit them, sometimes bringing war with them.  Most importantly of all, they provide a kind of porous gateway between cultures that can explain some rather strange party makeups, and allow for new adventures to be easily introduced.

I hope to do more posts in this series covering specific topics, like specific periods that would make good games or matching party themes with different regions, but that will have to come once I've gotten my head more fully around the issues involved.


*One could, of course, run an entire RPG without this sort of action-adventure nonsense, but that is not the intended goal of Feudal Anarchy.

EDIT: I forgot to mention someone played my game!
Posted by Evan at 3:32 PM