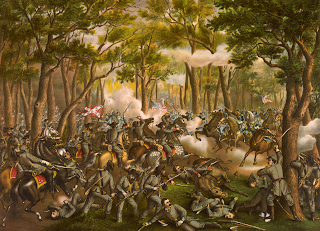 This is an extended pitch for a wargame/pseudo-rpg campaign idea I had the other day.  I posted a shortened version of this on G+, but I wanted to work up something that would explain more of how I planned on running it.  The battles will be fought using Richard Borg's Battle Cry: 150th Civil War Anniversary Edition while the campaign will be resolved using a hand drawn map and a Matrix game.  It is obviously heavily inspired by Dave Wesely's Braunstein campaign.

The idea for the Brownstone Campaign is that it takes place in a valley in the fictional Cumberbatch mountain range.  The valley is dominated by the town of Brownstone, which controls a major rail station that runs the length of the valley and connects two parts of the Confederacy; however, Brownstone and the smaller towns in the Northern Cumberbatch are largely supporters of the Union, and Lincoln has ordered one of his generals to seize the valley.

Six players in my home group will take the role of both Union and Confederate generals.  Each side will have a major commander with a large force and two minor commanders with smaller forces.  These forces will be composed of varying amounts of Battle Cry infantry, artillery, and cavalry units.  The commanders themselves will have individual names, sub officers, and command values determined in advance of play.

Each turn for these guys represents one week of time, and they can move 1 point at a time. - unless their argument includes some reason they would be able to move faster.  Battles only occur when arguments say they do.  The goal is to get the most victory points by holding towns, winning battles, and completing other objectives, after 4 months.

I'm going to draw a map of the valley that will contain c. 20 points or nodes.  Each point will have a board setup decided on in advance for use with battles, with the events of the campaign deciding which side enters from where.  Before a battle, I will secretly ask each commander involved what there general plan for the battle is, how many men they're willing to commit, and how many units they're willing to lose before giving up the field.  I'll use this information to place the units myself, taking into account the properties of different troops, commanders, and terrain in order to decide things like which of the two sides starts closest to the hill they both want to take.

Battles involving more than one general on a side will (until I can acquire another copy of the game) mean that only a small contingent of one commander's forces will appear on the field, and the battle will be controlled by the superior ranking officer (not the officer with the superior command score).

In addition to this, I plan on running a G+ game where players take the roles of one of the following people:
Abraham Lincoln (who is constantly wiring the union commanders with his instructions)
The Mayor of Brownstone
The Confederate "General" in charge of the administration of the Valley Department
an Abolitionist
the Editor of the Local Newspaper
Or others if someone has a better idea

The newspaper editor, the mayor, and any additional figures created by the players will have to roll to see what their loyalties are, since they are not immediately obvious here.

Between sessions of the wargame campaign, I'll contact them (either through hangout or play by post, not sure which yet) and inform them of what happened in the war.  They will in turn, give me a number of actions they wish to take - some of which will be in the past in order to catch the G+ timeline up with the wargame one.  I'm thinking these will also rely on the matrix formula but will be a great deal more freeform.  These players will want to win their own victory points based on their role, so the abolitionist wants to see the valley taken by the Union and to see the slaves held by the smallholders in the southern part of the valley freed, while the mayor simply wants to advance his political career.  This will obviously be harder to score.