This write up originally appeared on my old Traveller blog, but I have edited it in order to make it more in line with my current conception of my Traveller setting. 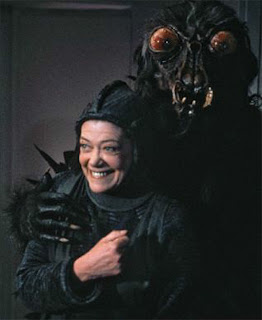 Male [click] aliens appear as furry creatures slightly larger than a human in stature.  From their furry faces peer a set of compound eyes and mandibles.  Their actual skin is a carapace designed to insulate their bodies from their planet’s notoriously harsh days and nights, as well as to protect them from predators.  Females are little more than mobile bloated egg sacks.  Similar organisms exist on the [click]’s home planet, though their fur is usually hidden beneath an outer carapace.  It is theorized that these creatures are to the [click] what gorillas are to humans.

History
The [click] were once the proprietors of a massive empire that included several other species.  They ruled through fear and grand displays of extravagance that both terrorized and mesmerized their various slave species.  However, their natural propensity for infighting eventually led to the rapid collapse of their empire about the time humankind first discovered the Jump drive.  Their handiwork can be seen in the Caliboi, which humans of the Future-past know as Mu-tants.

Today the [Click] Empire is no more, but it has left a number of domains controlled by petty [click] warlords and clans.  The Terran Directorate has been gobbling these up for several years now, and few of the remaining states would be able to resist a Directorate invasion.

Psychology
[Click] culture is largely patriarchal.  Unlike other species, this is due to a strong biological imperative.  Female [click] are essentially non-sapient, and the males treat them as a commodity.  Fierce competition exists between males for who possess the most females, and war leaders will often lead raids on enemy worlds to capture women.  Oddly, this practice has also led to the kidnapping of the females of other species to display as trophies, despite the fact that the [click] cannot mate with them.

The largest class of the [click] is infertile males.  These males have usually been sterilized at birth in order to keep them in a submissive state to be used as work horses for the bureaucratic and military functions of the successor states.  A thin upper echelon maintains their fertility, but they must constantly protect it from up and coming fertile males.

Flavor
Most view the [click] as decadent.   Their clothing vaguely resembles that of the various desert peoples of Earth, with robes designed to insulate the wearer against harsh climatic conditions.  However, since the [click] have left their desert home world, the rarely need such clothing.  Today it serves a primarily decorative function and is usually bestudded with jewels and rare materials in order to show the prestige of the wearer.

The [click] are more or less space-stag beetles, and spend much of their time competing with each other for position, rank, and females. Since they are intelligent, this usually take the form of more subtle contests and schemes, though physical violence is quite common among them.  They take slights to their prestige very seriously.  [Click] consider themselves superior to other species, and they do not tend to treat with them on equal terms.  This does not mean they do not enter into negotiations when necessary, simply that they only do so begrudgingly.

[Click] as player characters
Armored; Natural Weapon (claws);  Notable Endurance; Weak Dexterity
All [click] characters are male.  Any with a Social Standing less than 11 are infertile.
Posted by Evan at 4:49 PM