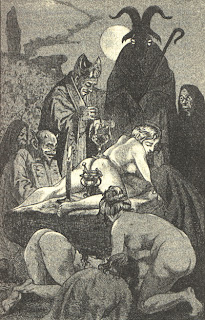 Once a great empire stretched covered the lands of the West.  Under the protection of the God of Law it was able to spread into the Dark Country and even the Desert Lands.  There were human civilizations who still venerated the Old Gods or even the Demons of the Pit, but none of them could match the power and majesty of the Empire.  In their jealousy they chipped and scratched at the lands and works of the Empire.  Eventually that wondrous realm collapsed under the weight of invasion.  Barbarians reigned where once an empire flourished.
But is this really the whole story?  The Church teaches that it was not external invasion thought brought down the Empire but internal weakness.  Secretly within the empire - and indeed within the Wester kingdoms and the Seven Cities today - priests of a sinister cult worked to undo the works of Humankind.  They were, and are, the Adversaries' servants.  Their black rites are a mockery of the rites of the Great Church.
These worshipers of Chaos sowed dissent among the peoples and leaders of the Empire.  Civil war begot civil war.  The Empire that the barbarians descended upon was not what it once was.  The machinations of demons and their mortal servants brought it low.  Now that the realms of the West have risen out of the ashes, they have begun their work once again.  The Church says that all should be ever vigilant against the workings of these men and women lest civilization once more be put on the fires of barbarism.
Whether or not this reading of history is true is up for debate.  Still, there are those who serve the masters of the Pit.  Many do so within the West and the Seven Cities, and those that do often create strange rituals based on the Church's own.  Some even operate within the Great Church's clergy.  Their miraculous power seem to be born from the God of Law's grace rather than the sinister workings of Orcus or Astarot.  These priest sneak away into the wilderness to perform their unholy duties and make deals with sinister beasts.
Those few who have witnessed Goblins and Orcs in their demonic revelries often claim to have seen a number of men and women in their presence.  Many peasants have claimed these people are the lords of the land, its very defenders.  More than a few of these peasants have been right.
Rumors say that Nightwick Abbey has recently become party to these wicked thralls.  Perhaps they are organizing the monsters who lair within, or perhaps they are searching for something.
Posted by Evan at 6:54 PM