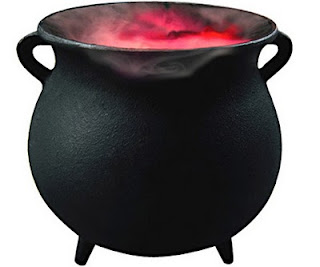 The Demon's Cauldron appears as a crock large enough to hold an adult human body.  Orcus -- or perhaps one of his diabolic minions -- forged the Cauldron in the very fires that permeate his infernal prison.  This forging has bestowed upon the Cauldron a malevolent intelligence.  It primarily served to bolster its creators rotting armies, for any person living or dead placed in the Cauldron becomes a Coffer Corpse in 1d6 rounds.  A save vs. Spell Like Devices is allowed for living subjects.  In addition the Cauldron possesses the following powers:

Malevolent effects only affect mortal users of the Cauldron.  Demons are not affected by its corrupting influence.  It is said that Orcus let the Cauldron slip from his grasp so that it would cause more chaos and (un)death in the Material Plane.

Ok it isn't that original, but while listening to the audio book of the Black Cauldron on the way back to Knoxville I had the powerful urge to write this up.
Posted by Evan at 12:52 AM

Email ThisBlogThis!Share to TwitterShare to FacebookShare to Pinterest
Labels: artifacts