Here is another Uz monster usable in Old School campaigns: 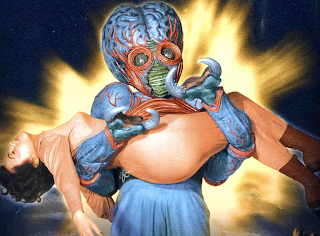 Mu-Tants are a degenerate, servile race often employed by the various extraterrestrial entities which haunt the Desert of Demons.  They approach 7’ in height, and are covered with a thick, blue-grey carapace.  Their hands are malformed and have fused into pincers.  Their misshapen heads appear to have large, exoskeletal brains; however, Mu-Tants are only slightly above an animal in intelligence.

It is possible that Mu-Tants were once a highly advanced race, and that whatever entities first enslaved them removed their capacity for creative thought.  As it stands, Mu-Tants make somewhat effective body guards and laborers, but they can become irritable and often strike down overconfident masters.
Posted by Evan at 12:01 AM