I'm still enjoying working on Cuccagna, despite my best efforts to turn my attention elsewhere.  Anyway, here is the current version of the map with the Great Wen, the castles of the various Prosperoes, and the "I don't know what to do today so let's go to the dungeon" dungeon noted on it. 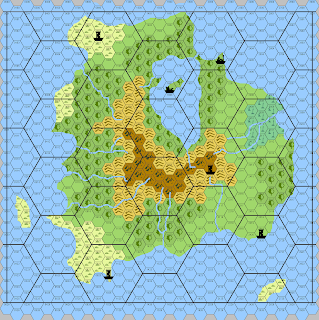 The aforementioned dungeon is probably going to be called the Lapis Vaults, and it is the former manse of the now AWOL Prospero the Blue.  The Vaults are rumored to be filled with various treasures and hideous monsters created by the missing wizard.  I've been trying to sketch some dungeon maps for it, but it's been slow going because I'm an insecure perfectionist.

Once they're finished I can start slimming down the monster list by seeing what I put in the dungeon.  Outside of dungeons, I've decided to definitely go for individual monsters.  The Dragon of Cuccagna is the Dragon of Cuccagna, as is the Cyclops and the Unicorn.  There will be some monstrous races, but they'll be largely defined by certain geographic regions.

Speaking of regions, here are some proposed names for the various regions on the above map:
The Forest of Delights
The Swamp of Cudgels
The Riddle Wood
The Forest of Coincidences
The Field of Fortune
The Plain of Plans
The Tired Towers

That's not every feature, and I might get rid of one of the forests to make room for the Saturnine Swamp, but I think it's a good place to get started.
Posted by Evan at 6:45 PM