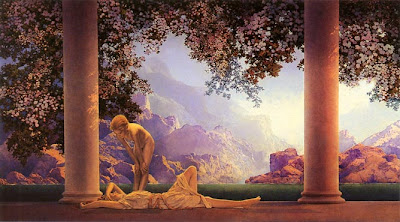 Conspectus: The Seven Who Were One, a group of ageless wizards that were all once the same wizard and now try to kill, eat, or imprison each other; idyllic meadows, beaches, and copses that hide dark secrets and hideous monsters; man-eating horses; beautiful maidens who devour the hearts of men; perytons, satyrs, unicorns, and dragons; horrid vat-things spawned by stupid wizards who don't know math;  The Cavern of Sorcerers where it is said one can enter to talk to the Devil himself; genies complete with matching lamps; Secretive mystery cults that worship gods long thought dead; cynocephaly, blemmyes, and monopods, oh my!; mountebanks exercising their trade on a gluttonous and slothful populace; lotus eaters; half submerged Greek ruins; crumbling castles haunted by strange spirits or fairies; beautiful yet sinister statues of wondrous power; the decadent port city of Great Wen, filled with charming ne'er-do-wells

Short Appendix N: Clark Ashton Smith's Poseidonis and Averoigne Cycles, Jack Vance's The Dying Earth; William Shakespeare's The Tempest; The Travels of Sir John Mandeville; Homer; Lord Dunsany's "The Horde of the Gibbelins" and "How Nuth Would Have Practiced His Art Upon the Gnoles"

Email ThisBlogThis!Share to TwitterShare to FacebookShare to Pinterest
Labels: Cuccagna