Some Saints from the World of Nightwick 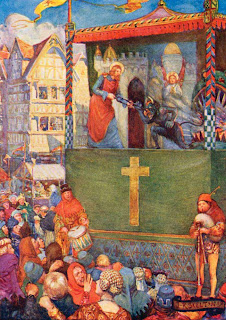 The Church of Law venerates a large number of saints.  For the common people, these serve much the same purpose as the Old Gods did in pagan days, while for the clergy their examples and writings provide useful insight into the nature of the God of Law.  Many holy orders are organized around the veneration of a particular saint, though only heretics of the worst sort would deny the existence and virtue of others.  In the West, saints are depicted with round halos while in the East they are depicted with square ones.

The Lady is perhaps the most holy of all saints; however, her cult is not terribly popular.  Her name is said to be too holy to mention, but some heretics assert that the High Pontiff has simply forgotten it.  She was the wife of the man Realmish scholars consider to be the first Emperor,* and it is said that she was the first human to hear revelation from the God of Law.

St. Gax the Lawgiver is always depicted as an elderly man with a beard and a habit bearing a festive floral print.  He is usually shown holding two keys that unlock the gates of Heaven and the Pit.  He was the second to receive revelation - after the Lady - but being the one who organized the Law and wrote it down, he is much more widely revered.

St. Hogg is depicted as a fat man with dark eye shadow to protect his eyes from the Sun.  he is said to have been an administrator during the last days of the Empire, serving in the Desert Lands.  He was a fierce opponent of the diabolic cult known to Lawful texts as "the Dukes of Drazah."  He is patron to butchers, reeves, and cooks.

St. Notappearinginthisfilm is typically depicted as a child in ill fitting clothing - usually that of an abbot or a bishop.  It is said that he was the first to introduce "nap time" to monasteries, and he is a patron to guild members and burghers as well as the patron saint of holidays and work breaks.

St. Ralph the Liar is depicted as a monk wearing a sandwich board claiming that his name is St. Benedict the Liar.  He is said to have convinced the High King of the Iron Kingdoms to submit to the Law through obscene aggrandizements, and creating the doctrine of the Ends Justify the Means.

St. Richard the Prior is depicted running while lit aflame.  He is a patron of truth tellers and it is said that he protects from death by immolation.  It is believed by the highest of the clergy that he chose not to exercise this power in order to save himself from death because he was ready to accept the crown of martyrdom.

St. Santa Claus is believed by some to be a sickeningly obvious adaptation of Father Winter, an Old God venerated in the Dark Country.  He is depicted as a jolly elf of enormous stature and weight wearing festive clothing designed for colder climes.  He is invoked by the superstitious against plague and frostbite, and is the patron saint of toymakers and bakers.

St. Simian the Fool is depicted as an monkey making an obvious gesture of refusal.  It is said that he refused to eat a martyr in the arena, and that once he was released he and the martyr traveled the world spreading the Law through an ornate organ grinder show.  On his feast day, bananas or other fruits are traditionally hurled at clergymen.

St. Simon the Wise is depicted typically as a magician, though sometimes only as a brazen head.  It is said that he was the first to organize the building of a grand cathedral in the capital of the Realm.  In order to do this, he developed a number of ways to increase revenue for the Church.  As such, he is patron of simony and money lending.

St. Toad is depicted as a frog in a monk's cowl.  He was the first frogling to submit to the Law.  He is not venerated in many parts of the Realm and the Dark Country, and some even assert that his feast day - Smarch the 32nd - isn't even a real day.

St. Twiddle is depicted as a man holding a church in one hand and a quill in the other.  It is said that he designed the cathedral that Simon the Wise had built, and that in doing so he established the intervals of 10' used by architects until this day - though some heretics claim that the presence of this standard in pagan and pre-human ruins calls this "fact" into question.  He is also patron of cartographers, though most who call on him in this capacity find him to be a fickle friend at best.

*Zenopolitan scholars disagree with this assertion, claiming the Empire existed for many years as a pagan polity before the Law was revealed to the Lady.
Posted by Evan at 12:41 AM