Monsters in Your Campaign: The X-Com Method 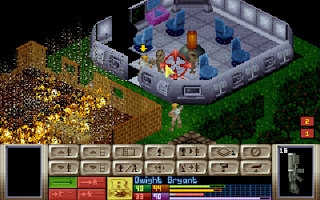 A little while ago, one of my Hburg players gave me a copy of the latest X-Com game in payment for helping him move some shit.  Playing it has reminded me of playing the original - which I did for the first time only about two years ago.  Thinking about that almost 20 year old game has helped coalesce an idea I've had for a while about how to present monsters in a campaign.

What I'm calling The X-Com Method requires a large number of new monsters.  Many blog posts and products advocate for all unique creatures which only appear once to menace the PCs.  This, they assert, will mean that the players are afraid of everything.  This is true, but it comes at the sake of agency.  Since these monsters appear only once and are by necessity weird and outside of the experience of the players, it means that the players can't make decisions based on the monster they are currently facing.

An extreme example of this problem can be found in Isle of the Unknown. Aside from the fact that many of the monsters are just plain stupid, their appearence does little to telegraph information about their toughness or abilities to the players.  A 15' tall pyramidal ostrich might have 15 hit dice while  30' long beaver with snake legs has only 5.  This wouldn't be a big problem except that - with very few exceptions* - these monsters will only be encountered once.

What X-Com does is have whole races of monsters.  Each time you see a new one your thought is "what the hell is that" and then it starts glowing or something and you're like "what the hell is it doing?!" and you're scared - or a scared as you can be playing a 19 year old game.  Eventually though, after you've had some of your men die due to their glowing thingies, you learn what the monsters do and how to counter it.  This offers the best of both worlds: you get scared players and - eventually - your players can make decisions based on information they've gathered in the game world.

If you think that this would lessen the horror overall, let me introduce you to this asshole: 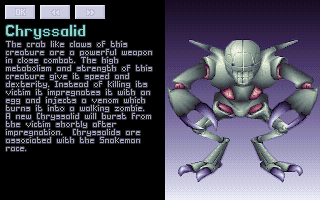 That, as the image will inform you, is a Chryssalid, and they are awful.  They have the ability to implant eggs in your men, which turn them into zombies, and then the zombified versions of your men move to attack the non-zombified versions and then when they're close a new Chryssalid emerges from its kills the shit out of you.  I've heard from other people that have played the game that a common tactic when confronted with these bastards is to activate a timed grenade at the end of your turn such that it will blow up when your squadie gets impregnated.  That's some awful shit right there.

One example from my game would be the Children of Stone, who have bedeviled the PCs ever since the first party entered the South tower.* While some of their capabilities are described in that post, most have been things that the players had have to guess at, and in some cases this has informed their decision making - such as whether or not to pursue the things when they flee or how one should close into melee with them quickly.  Another example might be the Valt-Weaver, which has only been directly encountered once, killing the PC of a notably cautious player.  Ever since then anytime I give any sort of hint about the creature being nearby - the smell of ozone, a soft blue light, corpse dust with strange ropy bits - the players get visibly worried in a way that amuses me.  The reason I stat that it might be one is that the current theory among my players is that there might be only one that wanders the first level.  A kind of soft example one can only get at obliquely would be the mention that MAR Barker makes to his players fearing the smell of musty cinnamon and the chiming of bells.

The chief problem with this method is that it takes time.  If you want to do it properly, you have to come up with a whole new list of monsters; however, I find the the advantages far outweigh this.  Watching my players speculate on how pig-men and maggot-men work in the Dark Country and Uz respectively has been a joy.

Plus, there are shortcuts.  The easiest is to steal weird monsters from things that your players are unlikely to be familiar with.  Uz has quite a few Tekumel beasties in it because I knew my Hburg group doesn't know anything about that setting.  I've also tried to tweak them a bit for my G+ group, which is far more familiar with that material.

*The most prominent exception I can remember is the legless platypus that looks suspiciously like a piece of bloody poop.  These things, unfortunately, turn you into one when you die, thus making them a slightly lamer version of the shit weasels from Dreamcatcher.
Posted by Evan at 1:18 PM