The Hell is Wrong With this Guy? 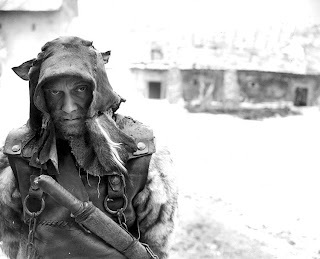 I spend quite a bit of time trying to make hirelings in my game “memorable.”  The easiest way for me to do this, and therefore the one I rely on the most, is by making them awful people.  Inspired by this post over by Middenmurk, as well as my creating different classes of hireling for Uz, I decided to make a set of tables that would automate this process to allow me to churn out bug-eyed, fanatical weirdos for my Dark Country game.  This is untested, and if the results are too wonky I might just go back to personalizing each one between sessions.

These tables are intended for the sorts of hirelings that PCs take with them into the dungeon.   Alchemists, smiths, quartermasters, and the like need not be created using these rules.  If the need arises, I will create similar charts in order to make them deranged sickos too.

The guidelines for recruiting hirelings are likewise only designed for hiring individual psychopaths.  The purchasing of mercenary companies, while a common practice in the Dark Country, requires a great deal more bickering over contracts and haggling over rights then I really want to deal with in this post.

A settlement will have a number of hirelings available at one time based on the chart below.  The number generated is the total number available until a fresh crop of young settlers arrives.  This could mean that the hirelings could be exhausted from a settlement for quite a long time in some of the more remote areas of the Dark Country.

For each available hireling indicated, roll on the tables below to determine what’s wrong with the hireling and the type of hireling it is.

What’s Wrong With Your Hireling

Hireling Types
Listed below are the types of hirelings typically available in the Dark Country.  Wages listed are for a typical month, and use the new reckoning of Dark Contry currency.  Thus a guilder (abreviated k) is worth 20 groshes (g) and 240 pennies (d).  A grosh is a silver coin worth the equivalent of a silver piece in LotFP or a gold piece in most other forms of D&D.

Not all of the types of hirelings are available in every settlement.  The table is but an example, and larger settlements such as the Seven Cities will have considerably more types available.  The referee may also change these tables to represent changes in the population either through new settlement or player action.

Barbers are those “trained” in what qualify as the medical arts in the Dark Country.  They are typically runaways from mercenary companies, though they may have also been employed by a noble family or wealthy merchant house.  They can bind wounds on a 1-2 on a 1d6, restoring 1d6 hp.

Brigands are either currently or formerly bandits.  They typically employed as light infantry by the Seven Cities if they are capable of being hired.

Conjure-Men are backwoods wizards of poor skill.  They only know one spell - determined randomly - and my only cast it once per day.

Fanatics are religious loons who have come to the Dark Country in order to participate in the holy war against the pagans.  If following a cleric, they will gain a +2 bonus to their morale.

Men-at-arms are comparatively heavily armed men of stout bearing.  They gain a +1 bonus to HP and a +2 bonus to morale if following a fighter of 4th level or higher.

Equipment: Polearm (70% chance of being a spear), shield, hand weapon, helmet, and a shirt of mail.

Peasants are common settlers from the West.  They typically have little to their name and little to lose.

Equipment: Wooden hoe, an empty pouch meant for bread or coin, and misery.

Woodsmen are those members of Dark Country society who make their living gathering forest products - whether that means felling trees, burning charcoal, or trapping for furs.