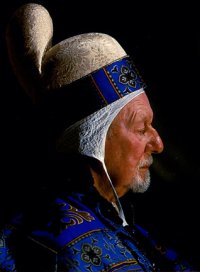 Monsters Slain
1 Minor Cyclops, 8 Slimes
Treasure Gained
1 Helm of Alignment Changing, a treasure map, a Sword +1 (+2 vs Magic Users) that the runes name "Witchslayer," a Sword +1 that the runes name "Sharp," a ring of control animals, 175gp, 2000sp, 2 book covers of scitalis leather (300gp each), and 7 blood stones (50gp each)
XP Per Player
515
*The estimate the party had made of the creature's size was based on the appearance of his eye in the window. Since it was disproportionately large due to his being a cyclops, they had added an additional 5-10 feet to its size in their mental calculations.
Posted by Evan at 5:53 PM