The Reptoid: A Character Option for Swords & Wizardry 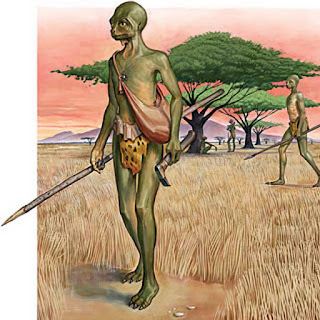 The Reptoid
Reptoids are a race of extraterrestrials that attempted to conquer Earth in the distant past.  They hail from the planet Repton, which humans once knew as Planet 12.  Most Reptoids encountered in the Desert of Demons are degenerate shadows of their former selves, living as hunter gatherers and roaming those lands which humans find most inhospitable.  Some still attempt to dominate humankind and return to the stars.  The options below are provided for the latter type.

Reptoid Racial Abilities
Character Advancement: Reptoids must choose at the beginning of each adventure whether they will be masquerading as a human or showing their true form.  While wearing their human-suit, Reptoids advance as a Fighter and use the Fighter advancement chart to determine their abilities.  Reptoids in human guise may only advance as far as 4th level.  Reptoids who are not wearing their human-suits advance as Priests and may reach as high as 8th level.  Reptoids never mutate as a result of advancing a level and draw their spells from the list available to priests of Apollo.

Weapon/Armor Restrictions:  When not wearing a human-suit, Reptoids are bound by the weapons and armor restrictions of the Priest class.  Their exist certain technologically advanced armors designed by the Reptoids themselves, and Reptoids may wear these without any penalty.

Ancient Enemies: Reptoids loathe Martians and all their works.  As such, they gain a +1 to to hit rolls against Martian opponents.

Keen Detection: Due to their superior senses, which are far in excess of those of puny humans, they gain a +1 to search rolls.

Note: This character type is currently unavailable in my Uz campaign.  In the event that some members of the group make friends with a group of Reptoids, future characters will be able to be members of this race.
Posted by Evan at 11:29 AM