Yavana Session 1 - The Hole in the Water 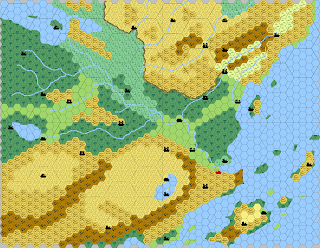 It is a project that started as a kind of map exchange when Nightwick Regular and friend of the blog Huth decided to use one of my maps for a project idea he had.  In exchange he offered to draw me a map.  He based it off of Lenap from the Wilderlands because it's maybe my favorite Wilderlands map and he knows me well. 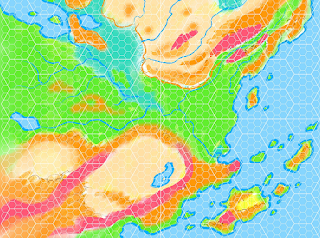 The Map as provided by Huth

This started a new project for me.  I am somewhat trying to make my own thing that feels like the parts of the Wilderlands I liked (obvious cultural analogs like Skandiks, Sword & Sorcery feel, science fantasy history), while removing the stuff I didn't like (elves, towns with names that don't match the nearby cultural analogs, etc.*).  I stocked this map based on that principal - including using the Ruins & Relics table from the ready ref sheets.

Yavana, the key region is a former satrapy of the Ilionian Empire.  Culturally it is similar to Hellenistic Greek kingdoms like the Seleucid Empire or Baktria.  The natives of the desert regions are Aramites who alternatively live in trading cities or as nomadic desert-dwellers.

I created the following three hooks for the first session:
Six Aramite priests have come from Olizon to Asterion seeking aid in the placation of their god.  While Olizon is no longer has any ports to the Middle Sea, the god Abzu is still important to their people.  A temple dedicated to the god lies near the city of Asterion.  Many relics sacred to the god lie inside, and the priests would take these back to their city if they could.  However, it is forbidden for them to harm the guardians that lay within.  The seek violent men for such a task.

A merchant ship from Ilion was forced to run aground on an island a ways off the coast.  While camping on the island, the merchants were attacked by strange “yipping lizards” or “birds,” (opinion is divided among the crewmen).  Some fled into the hills but found only more of the creatures.  One, who bears many scars and possible signs of fever, claims he saw a mastaba painted bright blue in the middle of the island.

Rumor has it that the small port town of Oetylus has been facing many problems of late.  Its people are stricken with a sinister plague and any who venture outside its walls to the interior of the island find themselves beset by dead riders.  Obviously this is the work of a necromancer and the people of the town believe they know where he is hiding and offer a reward for his capture or execution.

(Asterion is the "capital city" icon on the map)

I decided to use Castles & Crusades for the rules because I wanted a flexible system that still allowed me to use the full sweep of AD&D monster manuals.  At my wife's suggestion (since it was in accordance with my goals) I told the players they could not make demi-humans until they unlocked certain peoples by making friends with them.

The resulting party was...
Brandon as Bjorn Gunnarson, a Nordron Ranger
Chris as Adom, a Khemian Rogue
And James as Diomedes,** an Ilionian Fighter***

Bjorn and Adom wanted to venture via-boat to fight "dinosaurs" on the mysterious island, but Diomedes was able to convince his compatriots to join him in the Mangrove Swamp looking for the temple to Abzu due to its proximity to Asterion.  At dusk, Bjorn scouted a head as part of his watch and happened to see the clearing where he believed the temple stood.  Their first night in the Mangrove Swamp involved a showdown with a group of dingos, but the wild dogs were unwilling to fight such large and healthy creatures.

The next day they made their way to the clearing, where they found the Hole. 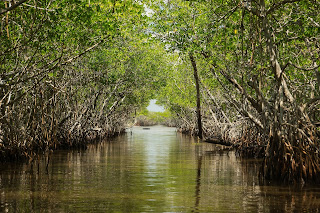 Investigating the "hole" they learned it was a magically created shaft of air going deep under the surface.  Hooking a rope up to one of the mangrove roots they repelled down into a strange structure.  The Temple of Abzu had sand covering its floor several inches thick. The walls were covered in deep-blue spiral tessellations that didn't quite tessellate so occasionally a light blue cuttlefish or dolphin tile would be used to fill in gaps.  This of course, was not why the place was strange.

The adventurers soon discovered that any sand they kicked up hung in the air a moment longer than it should.  Creatures encountered seemed to be aquatic animals and monsters that "flew" through the air.  The first instance of this that they saw were a pair of hammerhead sharks that lurked near the ceiling in the great entry hall.  The first they actually fought were a set of giant groupers hiding in the sand.  Adom quickly ended up in one's mouth but was able to escape by gouging out its eye.  Diomedes and Bjorn acquitted themselves well in the ensuing battle, but Adom was injured to the point of unconsciousness.  Luckily, Bjorn was able to bind his wounds and return him to consciousness.

Further exploration revealed a door they were unable to open because it had some sort of extreme pressure change, and two large chambers guarded by mermaids with long glaives.  These they slew handily thanks to Bjorn's skill with his rhomphaia which allowed him to cut through the fish women like butter.

Beyond the fish women they found another chamber with bas-reliefs depicting drowned human civilization in which the air seemed oppressive and breathing was difficult.  They assumed from evidence that the strange-pressured room from before was likely a more extreme version of this effect.  They also found a large chamber depicting a sword-wielding octopus in victory over drowned corpses.  Inspecting the sword in the relief, Diomedes was able to locate an open a secret door revealing the largest treasure cache I had placed in the setting thus far.  With such lucre in tow, they decided to leave the dungeon.

While trying to get the gold out of the hole, they were accosted by a group of iguana-men.  These did not seem hostile, but did seem to want to extract a "tax" for traveling through the Mangroves.  The PCs began to offer the lizard-people a chance to "use" the hole to gain yet more treasure, and the lizard-people, confused, decided it would be best just to leave.  Thus the party was able to return to Asterion without further incident.

Diomedes and Bjorn purchased new armor, and Diomedes spent a considerable amount of money carousing.  In doing so he became embroiled in a mystery religion (the nature of which I have yet to determine).

DM Notes:  I halved the amount of treasure and number of monsters since several players were missing, but I still think they may have gotten too much treasure without enough work. I don't think I will continue to use the carousing rules but I may change the system to "xp per gold piece spent" in Arnesonian style.  If you have an idea, let me know.

* Some readers might wonder while I allowed the full range of C&C classes.  I find a lot of the "Swords & Sorcery is low magic" talk completely nonsensical with example stories like "The People of the Black Circle," The Swords of Lankhmar, and The Dreaming City. The Swords Series in particular seems to basically be AD&D without demi-humans.

** Diomedes did not receive his name until after his session.

*** My version of fighters utilize Follow Throw from Ruins & Ronin instead of Combat Dominance.  I will likely post the Nightwick version in a day or two.