Yavana Session 2 - Theft of the Arrowhawk 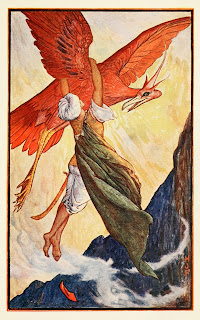 After having two players make characters using the Hill Cantons background generator, we had...

Those who had been to the Temple of Abzu last week boasted of their victories and wealth in the Salty Squid but also decided that returning there would mean certain doom.  Their boasts attracted two knew partisans and also a job offer: Faldor, an apprentice to High Vizier Babashek asked for a double duty that he would repay with a double boon.  The first duty was to seek out a large ruby in the Serpentine Jungle and return it to his master.  Babashek was willing to pay 6000 pieces of gold for the gem, or so said the apprentice.  The second task, he asserted, required great skill and cunning. 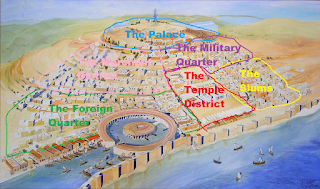 The Town of Asterion

Faldor asserted, with great nervousness, that there was a man masquerading as a mere beggar on a street corner in the Temple District.  This villain needed to be silenced forever.  Faldor was willing to offer 500gp to end this man's life.  The adventurers at this point split up, with Janstor and Sable going to see what was up with the beggar and Diomedes, Bjorn, and Adom staying to inquire about the tasks from Faldor.  The trio learned that Faldor was rather flustered by questions and was unwilling to elaborate on the nature of the beggar's alleged turpitudes.  Despite this, the trio decided to take the job (in a sense) after forcing Faldor to pay in advance.  Diomedes then headed to the market district to purchase a mule, a cloak, and a week of iron rations.

Meanwhile Janstor and Sable were trying to figure out the nature of the beggar.  He seemed to have a thousand yard stare and be easily frightened - traits unusual in powerful wizards.  They dragged him into an alley where he explained that a bright red scarf he had was a sign of his protection by (and from) the Old Red Gang and that he had payed his money this month.  At this point the rest of the party arrived on the scene.

Interrogating the beggar revealed that he had seen Faldor enter the strange, featureless tower reputed to be owned by Babashek by way of a secret door.  They gave the beggar the rations, the mule, and the cloak and told him to head to Olizon and never to return to Asterion, which he presumably did.  They then set about testing, in broad daylight, his statements about the tower using a grappling hook.  They found the secret door with great ease - thanks to the skill of Adom's throwing arm, but decided not to enter the tower of such a supposedly powerful wizard. 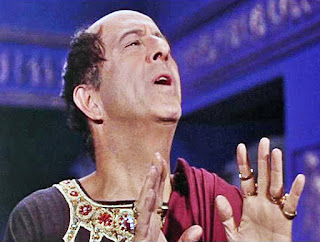 Instead, Janstor suggested they go hear an offer from Kistomerces, the most powerful merchant in Asterion.  Kistomerces was angry beyond rational thought because a group of merchants had landed up the coast and they were transporting their goods along a longer path to avoid his tariffs.  He demanded that a magic bird - known to learned men as an arrowhawk - be stolen from the caravan and brought to his warehouses.  The party decided this sounded like an easier task than gathering treasures from the Temple of Abzu, and thus they decided to make their way to intercept the caravan.

They purchased canoes and made their way upriver, with only a few tapirs to bother them, and stopped at a small village.  Here they conversed with one of the farmers who was vexed by a problem: "My greatest fear is that my sons will not understand me."  Feeling this moment was awkward, Diomedes wondered aloud "so... is the Bible out yet?" much the the bemusement of all listeners.  They paid for their stay in the farmer's hut and paid extra in the morning before setting off again - though not before Bjorn tried, unsuccessfully, to hire the farmer's degenerate sons.

The next night, while camping in the foothills of the Mountains of the Moon, the party met with tragedy.  Lions set upon their camp in the night.  These lions seemed to be of unusual intelligence, and when threatened by Bjorn only the youngest pair of males went to seek their doom.  They killed Bjorn in a flash but were in turn killed by great chops (and lucky rolls) from Diomedes' falx.  The two males dead (and a female injured by missile fire) the lions vanished into the hills.  The survivors divided up Bjorn's belongings and failed to bury him before heading off once again to try to intercept the caravan. 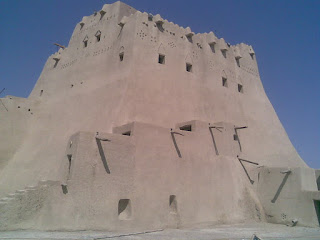 The Walls of the High Keep

Since Bjorn had been planning their route and they were relying on his trap-making abilities and wilderness senses for the ambush, a new plan had to be devised.  The druid Sable decided that instead of ambushing them in the wilderness, they would meet them at the High Keep and decide what to do there.  They made their way to the keep with little trouble but found it guarded well beyond their ability to fight.  They did not seek to take the keep, of course, but did believe it would make it harder to steal the bird.

Things turned even worse when they realized the caravan had upwards of 100 members.  Any plan they concocted would have to be daring or meticulously thought out.  However, they had two very good turns of luck: first, Diomedes was able to ingratiate himself with the leader of the caravan guards, and second, Janstor was able to worm his way in to the merchant hierarchy.  Janstor was even given the task of dosing the arrowhawk with purple lotus to keep it docile.*

These developments now changed the color of their plans.  They ran through several that involved the use of lotus, only to realize they would have little left over to drug the bird.  This would not do, as the bird was likely extremely powerful - one of the merchants referred to it as being "of another plane."  So they decided to use a modicum of the purple lotus to drug the guards' horses during a shift change, then they would yoke some non-drugged horses to a cart and make off with the largeish cage that housed the bird.  This worked surprisingly well as the intoxication of the horses caused much confusion in the camp.

While making their daring exit, they passed by some pickets sent out by the High Keep.  These men inquired what the ruckus was, and Janstor and Diomedes were able to convince them that bandits had climbed over the walls and their presence was required at once.  The rest of their journey involved exchanging their cart for canoes and heading back down river, avoiding an ambush by gorilla people using obscuring mist, and finally Adom narrowly avoiding being dragged out of his boat by a tiger.  They made it home safely and without further combat for a reward of 3000gp.

*I have a "system" I use when the players ask me something I don't know the answer to: I roll a d6.  Low is good for the players, high is bad.  JP asked if there were any jobs he could do for the caravan and I rolled a 1.
Posted by Evan at 10:21 PM