Yavana Session 3 - In the Jungle of Serpents 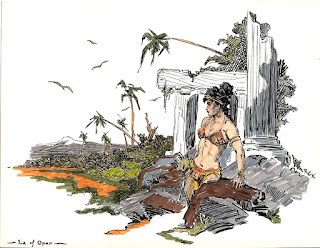 The party once again started in the town of Asterion.  Kistomerces the merchant let it be known that he was seeking Janster for an offer, and while Janster was unwilling the rest of the party felt that if he did not see the merchant they would have Problems.  They got Janster semi-intoxicated on the teal wine of Yavana, went out into the street, and then quickly shoved him into Kistomerces's largest storehouse. 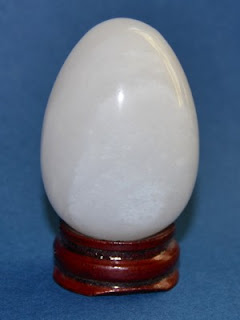 Kistomerces found this unsettling but made his offer anyway.  He told Janster that he could join "the Angry Dead" if he but held on to a jade egg until Kistomerces asked for it again.  Unsure what the "Angry Dead" were, and willing to sell the egg to another person for profit, Janster agreed.   When he discussed it with his compatriots, they agreed he should sell it but decided it could wait until they returned from their selected adventure.  The other new hooks for this week, stealing self-propelled ship belonging to the witch Sycorax and going to search for some black cube in the desert Sable saw in a dream, seemed out of reach to them at this point.

After a brief discussion they decided that all of them wanted to go and retrieve a giant ruby from somewhere within the Jungle of Serpents.  Babashek, the High Vizier, had let it be known that he sought such a ruby and was willing to pay 6000gp for its being rendered unto him.  The party took their canoes and paddled up the turquoise river until its right bank came close enough to the jungle that they felt they could disembark.  They had only been in the jungle a few hours when disaster struck. 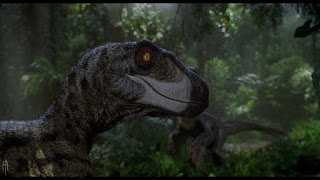 Distracted by movement further on in the jungle, the party was unprepared when a large deinonychus leaped out of the forest and gutted Sable.  Shortly thereafter the movement in front of them was revealed to be a second such creature intent on getting into Diomedes' steel hide.  The fighting was brief but intense, with Janster and Adom showing that agility can be as useful as strength in a scrap, their poniard and rapier deflecting raptor claws and skewering brains.  Luckily for Sable, Adom is somewhat skilled in the arts of medicine and was able to prevent her from perishing and even restore her consciousness.  Once awake, she made use of the goodberry spell to heal her and her compatriots.

Janster then scaled one of the nearby trees to see if he could spot the tower in which the ruby supposedly lay above the canopy.  He saw it not but did spy a dark shape just a bit north of them.  They decided to go investigate and soon found that it was a massive bunch of army ants surrounding something.  Using fire and slings the party forced enough ants off to make out that it seemed to be a pterosaur and some kind of rider.  With still further use of torches Adom was able to slip off a gold, bejeweled belt buckle from the corpse.  They then elected to set up camp far away from the army ants, sleeping in a large tree.

That night during all of their watches they saw signs of fires burning in the jungle as though there was a village.  Deciding they might no more about the tower, the party attempted to make its way to this village but was stopped by a group of lizard people.  These were guardsmen for the village, which was itself entirely made up of lizard people, and while they did not let the party stay within the village they did peacefully trade some ornaments and discuss the lizard people's hatred of dinosaurs.  In a way they made "neutrals" with them. 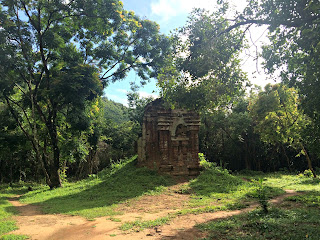 The lizard people also knew the location of the tower, which was about two days walk (at least with slow human feet) due north of the village.  Indeed after going north Janster was able to spy a clearing and ruined tower from the canopy.  The trip to the tower was uneventful except for a few nights spent in trees and an increasing number of snake tracks in the sand. 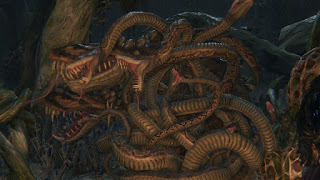 The Peril of the Tower

Janster elected to climb a tree within only a mile or so of the tower to get a better look at the clearing.  This time he noticed something ominous: a massive snake ball in a riot of colors and separate species. They decided fire would be the best weapon against such a swarm and prepared a set of oil flask cocktails for this purpose.  As they entered the clearing, the snake ball exuded tentacles of living snakes forming several "heads," such that the broad out line of the thing from a distance was as a giant hydra.  What this creature was capable of will never be known, for the fire proved efficacious before the beast had a chance to strike.  Once the snakes either burned or slithered away, all that was left behind was an enormous ruby.* 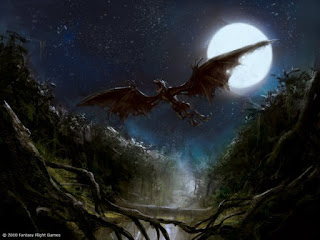 The Messenger of the Outer Dark

That night it seems the fickle and forgetful gods remembered that Janster had not yet sold the egg, for while the party was sleeping on their tree limbs a strange demon visited Janster and attempted to rob him of the egg.  Adom, who had been keeping watch, attempted to hit it with his sling.  He missed, but the alerted creature gave out a strange cry that awakened the rest of the party.  Attempts to attack it proved fruitless, and a strange discussion began with the beast.  Janster said "I will have to show it to Kistomerces before I can give it to you," to which the beast responded "how long will that take?"  The joking response was "could you give us a ride?" and after a bit of fumbling and wrestling the creature was able to do just that - flying out to the void and then down again to Asterion.

It deposited him outside the warehouse of Kistomerces in the dark of midnight.  During a flustered attempt to explain what was going on to one of Kistomerces' assassin-guards, Janster produced the egg and it was deftly snatched out of his hand by the demon, who then flew up into the void.  Kistomerces, after being informed, was enraged.  He informed Janster that if he wanted to join the elite group of assassins, for that is what the Angry Dead are, he would have to recover the egg once again from a place called "the Dungeon of Dreams."

The rest of the party decided that there was little they could do now and instead rested the rest of the night - except Xenophon who kept a long watch.  The next day they pushed on long enough to return to the lizard people village and bargained with them for guidance back home through the Mangroves. 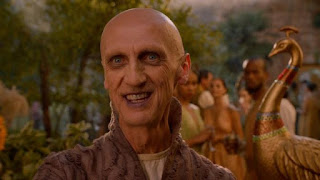 Babashek is like this guy's handsomer (but equally bald) brother

Once returned to Asterion, they made their way as quickly as possible to the palace to speak with Babashek.  A guard attempted to halt them but was dumbstruck by the size of the ruby they carried.  They found Babashek planning the fate of Yavana in a chamber in the palace and he payed them a hefty reward for their trouble. Seeing that the party was capable of great tasks, Babashek announced that there were a set of ruins in a valley in the Moonshadow Desert.   In these ruins lives a boy who carries about him the "Beads of the Sky."  But no man has ever gone to the city and lived for anyone who enters the valley is beset by a terrible sandstorm.  He wants the beads.

Xenaphon was also, somewhat surprisingly, able to get Babashek to admit that he was a vizier of that sort - the type that kills their satrap and marries his daughter.  Babashek reacted basically with "you caught me, but the plan is already in motion."**  Xenophon made an offer to help him but once they were out of the palace he told his friends the will need to kidnap the princess Babashek planned to marry "for her own good."

*Well that and burned snake corpses
**Indeed, unless the PCs do something very drastic, next session will start with news of Ajaxos' death.
Posted by Evan at 7:40 PM