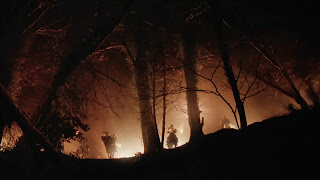 I apologize for the uncouth presentation of my largely unpainted minis and table below,  but I generated that this battle was going to happen this month two years ago and got distracted since then. The various dramatis personae described in this post are described here.  The rules used were Chris Kutalik's By This Axe.

The initial positions at the Battle of Vollage

A small company of Badder's Boys, apparently the last, has come this dawn to announce terrible news.  The Bishop's army has been defeated in the field by the White Lady, and the chaos and famine that reigned many years ago is likely to return!

Elves overlook the ruins from a nearby hill, where once a church to St Gax stood

The Two armies drew themselves up around the ruins of Vollage, which was burned years ago during the last pig-men invasion.  The Badger Men (as Badder's Boys are often called), heard clarion calls in the dead of night and the thundering of hooves and realized the battle was upon them.  There had been no time for Bishop Notker to give any man unction or even a prayer.  They said that he had planned to shave his head in deference to the God of Law that night, but no one knows if that was completed when the attack began.

Badder and his Boys

Badder's Boys were tasked with taking a small area of ruins on the army's left flank and prevent the elves on the hill from coming down and joining the battle.  Unfortunately, the elves provide withering fire that ultimately forced the Badger Men to retreat from the field without their leader.

The White Lady and her Groans

The center of the White Lady's Army was  made up of pig-men and monstrous groans.  The groans proved to hit hard but the levy of the Bishop was able to hold them off and eventually slay them with their spears.  The few remaining knights who the Bishop had called up attempted to hold off the pig-men, and did so admirably.  However, the tide of battle turned when the White Lady struck out with her vile magic and Bishop Notker buckled in his armor.  Some attendants were able to escort him off the field, but no man knows what happened to cause the Bishop such pain that he would quit such an important battle.

Badder Faces the White Lady alone, his boys flee in the distance

Attempting to rally the troops, Badder himself rushed ahead to challenge the White Lady to single combat.  She blunted his sword with magic, causing it to do no damage to her, and then struck out with her own attack which knocked him to the ground.  Pig-men rushed to grab him and take him captive.  That is the last his remaining boys ever saw of Badder.

The knights are captured

By the light of the Haunted Moon, the company could see the few remaining knights on the field surrender to the White Lady, who took them captive before her entire army seemed to disappear into darkness.  Sir Albrecht, the Lord of Nightwick, was their leader and is either among the captured or the slain.  It is safe to say he is unlikely to return to his demesne in this life.

Email ThisBlogThis!Share to TwitterShare to FacebookShare to Pinterest
Labels: by this axe, Nightwick Abbey, the dark country, wargaming