The Cosmology of Nightwick 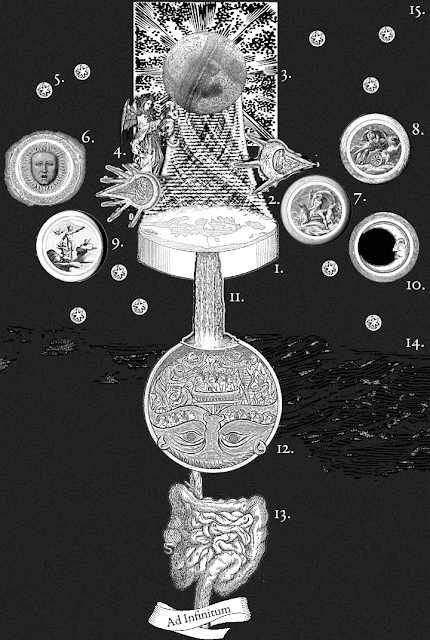 A heretical model of the cosmology of the World of Nightwick created by Cole.

1. The World, sometimes referred to in ancient texts as Mundus, is a wide disk that holds all the nations of Men.  It is suspended in what scholars believe to be the middle of space.  Creatures from other locations in space may manifest themselves in the World or be summoned there by magicians. Some say that the Lazarenes, a tribe of mutants who worship the demon prince Moloch, ride into the sky and off into space on great ships pulled by demonic monsters to go thither and yon amongst the planets.

2. The Mountain of Heaven is believed to be suspended in space somewhere above the World.  It is the dwelling place of those who have served, spread, and obeyed the Law. It is not visible from Mundus, leading to some heretical and diabolically inclined scholars to assert it does not exist, however, Zenopolitans say that the mountain is the same color as space and therefore effectively invisible to those souls not following the Law.

3. The God of Law whose constant thrumming can be heard throughout Space, though seemingly not on Mundus. It is from Him that the Law comes and all order in the universe is maintained. Cole has chosen to represent Him here as a sphere, which is the most common depiction in the West and the Dark Country (and the motif most often observed in Nightwick Abbey); however, in Zenopolis, Muscgorod, and Novogovy He is usually depicted as a cube. Other models also exist.

4. The Saints are those who have served the Law most ably, such as the Lady, St. Gax, or St. Simon, are permitted to live in the highest climes of the Mountain of Heaven so that they may bask in the presence of the God of Law. Some may be seen here in astral ships, going about space and learning its goings on so that all may be reported to the God of Law and rectified within His will.

5. The Stars, as magicians and scholars call them, are actually angels - usually octophim but they can be any order of angels from the Mountain of Heaven. They are set up by the God of Law to maintain the physical laws of the universe. Magicians often monitor them to see what threads of reality they can pull at on which dies to avoid their wrath, as well as potential ripples of potentialities into the past and future.

6. The Sun as men call it is actually known to sages as the Plane of Fire, the home of one of the four elements the God of Law used to create the World. Now it holds the leftover fire from creation and is used to mark the days.

7. Neptune, similarly, is actually the Plane of Water.

8. Mercury the Plane of Earth.

9. and Venus the Plane of Air.

10. The Moon is more mysterious.  Its faces change greatly without rhyme or reason, seemingly being full at least one sixth of the time.  Attempts to make lunar calendars in the World of Nightwick have led to the strange situations of certain liturgical months occurring when it would be unseasonal, such as Shocktober.  This was recently rectified when Pope Palpatinius introduced his new calendar based on solar movements (post coming soon).  Some believe the Moon is made up of the positive and negative forces needed to maintain the universe, but this is just speculation.

11. The River Styx draws water from the Blood Red Sea before passing through the ancient ruins of Acheron and falling off the side of the world. It is by this river that the larval souls of the damned are transported to the first of the Dragon of Hell's thousandfold stomachs.

12. The Dragon of Hell's great hellmouth sticks out of the Bottom of Space to snatch the larval dead and the water of the River Styx.  The dragon is perhaps a giant demon or perhaps some other sort of being, but its intestines are the infinite layers of the pit.

13. The Infinite Layers of the Pit are made of the different chambers of the Dragon of Hell's infernal gut. Most chambers have their own individual lord of hell, with some chambers or even whole organs belonging to a great prince or president. The chambers tend to be themed, but beyond these broad strokes it is difficult to describe the Pit as it is the essence of chaos contained.

14. The Bottom of Space is part of a difficult concept that even the most learned scholars think is "some kind of hot nonsense." It is said that space is infinite, but at the bottom is a dragon.  Cole has represented it here as a kind of ephemeral land.

15. The Top of Space is equally nonsense, but also equally true.