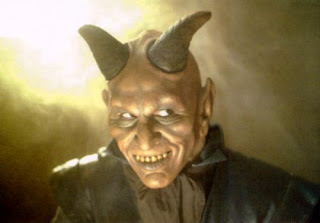 Devil men are diabolic servants of the demon lord known to men as the Horned One.  In places in which the Horned One's presence is felt in the material plane, his taint acts like a radiation that twists and deforms the unborn in the womb.  Such infants are typically either directly killed by their communities or left in the wilderness to die of exposure.  However, sometimes the parents will seek to disguise their children so that they might live.  This rarely ends well, for creatures touched by such demonic taint will always seek to sow evil into the world, regardless of whether or not they are shown mercy.

This is not the only way devil men come into this world.  The Horned One is known to appear to women and tempt them to engage in all sorts of sexual perversions.  The result of these awful meetings are often devil men, though some have been known to give birth to jackals, goats, and other animals with diabolic intelligence.  Devil men can also propagate their own vile race by mating with human women in the usual fashion.  Even exposed infants have a chance of surviving, for a devil child reaches full adulthood in 1d6 days.

Devil men typically congregate in old ruins known to possess terrible histories.  If the ruin is remote enough and if enough devil men gather there they will form a small village.  These villages will often have mixed populations, with small numbers of humans and beastmen whose clan is closely associated with the Horned One - such as deer or goats - also present in the population.  The vast majority of the humans will be female, and many communities of devil men are led by a human witch or hag.

Devil men are roughly the size and shape of normal humans, but they possess two great, curving horns, yellow fangs, and either red or metallic grey skin. They are typically well equipped, with mail, shields, and expertly crafted weapons.  These are typically gained through trade with sympathetic humans.  Devil men without these contacts will gain their equipment through raiding, in which case their AC should be adjusted to represent the poorly made and ill fitting armor they have scavenged.

They possess a crude form of telepathy that can allow them to communicate silently with other devil men; however, they usually prefer speech as this telepathy requires too much concentration and they will only rely on it when stalking a potential victim.