Politics in the Wilderlands 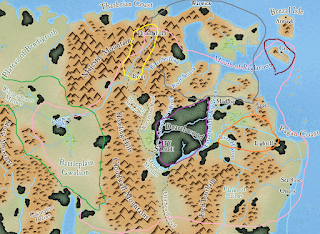 Unlike Rob Conley's vision of the Wilderlands, I do not view the politics of the City State as fundamentally feudal. Instead I think the name implies that it is a city state in the Greco-Roman or Mesopotamian mode and instead of having subordinate fiefdoms it has a "sphere of influence."

Within that sphere of influence the power in question has de facto power but not necessarily de jure power.  The de facto power comes mostly from the fact that they are more heavily militarized than the small villages they effectively bully.  You'll note on the map that many of the spheres of influence overlap, and these are the places in which battles happen.

Viridistan is slightly different.  On this map it shows a sphere of influence like the others, but on its home map it has provinces with governors who are more or less left to their own devices because of the incompetence of the inbred fish emperor. Most governors use their position to line their own pockets despite, or maybe because of, the fact that many have secretly been replaced with demons.

I should note that the kingdom of Lightelf is technically a client state of the Skandiks at Ossary, and that both Ossary and Croy are client states of the CSIO.  Pity the villages that lie where their spheres of influence overlap, because they get bullied twice.