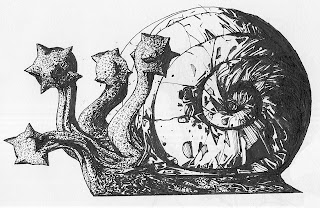 As a signatory of the FLAILSNAILS Conventions I have decided to put up a very rough and somewhat preliminary conversion guide for the current incarnation of the rules used in the Nightwick Campaign.  For now I'm assuming one is coming over from a version of TSR D&D, but I'm open to other options.

That should just about cover it.  It'd be unlikely that these rules would be used at the actual table, since my group meets at one of my players' homes; however, they would definitely be in effect if I ever offered to run Nightwick Abbey for Constantcon.
It is possible that I might make an online version of the Abbey use a different rules set (either straight up OD&D + Houserules or S&W) in which case I'll post a different set of conversion rules.
Posted by Evan at 9:30 AM