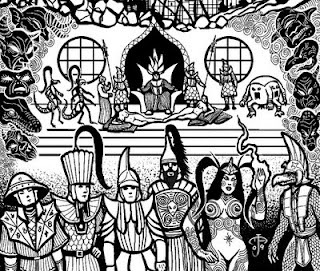 Hill Cantons' recent post on the possibility of a set of online Tekumel games got me thinking: what if this is the place where the old style of campaigns gets resurrected?
I'm not telling those involved how to organize their game, but if they wanted to set up several referee's with their own sections of the Jakallan Underworld (or with various underworlds in various cities through the Empire as Barker suggests doing with multiple DMs) with an open pool of "barbarian" characters to slum around in each that would be pretty metal.
EPT is one of those things that I marvel at from afar.  I'm not one of those guys whose loved it forever but never played that Chris describes here.  I just found out about it a couple of years ago from this OS thing we've got going.  As glorious as Barker's creation is I'm more interested in using it to fuel my own project like Ilion* or Uz.  I must say though that I am looking forward to seeing what these groups who have caught the Tekumel bug are going to do with it.  I'd probably tinker with it myself if I didn't already have a game going.

Maybe they'll get enough referees that I could get in a slot as a player.

Email ThisBlogThis!Share to TwitterShare to FacebookShare to Pinterest
Labels: empire of the petal throne, ilion, Uz