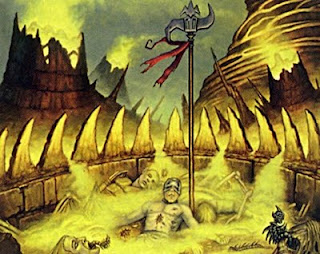 We had the full retinue of players so the party consisted of...

Yim "Falcon the Killer" Yimsley -- Neutral Mysterious ranger who may or may not have come to the Dark Country to claim a long-lost birthright
Agnes the Average -- an unassuming female fighter who wants to make something of herself
Scrottie McBallsworthy -- scion of a tanning family who managed to put him in the apprenticeship of a wizard
Rory LeDouche -- brother of the now deceased Roger LeDouche of the LeDouche family of Averoigne
Beauregard E. Beauregard (Beb) -- Reckless paladin of the Order of the Hart who disapproves of the tyrannical rule of the Bishop

The town was very busy when play began.  It was a rather pleasant day at the beginning of the Festival of the Holy Fool (April 1st), and Agnes and Falcon took the opportunity to gather rumors from the Medusa's Head and the Woodsmen's Lodge respectively.  They heard a few rather sinister things about Halfdan the Black and the Old Graveyard, as well as a few rumors about the Abbey itself.  Falcon seemed intrigued by the graveyard because Agnes reported she heard treasure lay in vaults and tunnels beneath it and he heard that vampires filled the graves.  They decided this was a good time to go grave robbing.

While out preparing for this, Falcon found that a small number of villagers were throwing rocks at his mite hireling.  Scrottie, who ostensibly was the mite's master due to the fact that he was able to communicate with the creature, joined in with them.  Falcon, offended, threatened the villagers with bodily harm and scattered them to the winds.  This is when Beb met up with them.

Beb had attempted to go check in with Roderick, the curate of the local chapel, but had been stopped by a number of Badder's Boys.  Badder's Boys are a mercenary company in the service of the Bishop of Lichegate that had been sent with Lord Eckhard to help quell the people of Nightwick.  Since Beb had stopped a few of them in their attempt to molest a pagan couple in the last session, they were out for blood.  Luckily Beb was able to slay one early on and chase the rest off, but not before maiming one he recognized from the misadventure with the aforementioned pagans.  He was then free to enter the chapel, which he found in a considerably nicer state than it was before he donated much of his gold to them.  Roderick informed him that he was no longer being pelted with rocks by the peasants -- though one of the players asserted they were simply too busy with the mite.  Taking this as a good sign, Beb left to join his fellows.

During the two violent segments, Agnes was busy watching a Frogling dancer with a janglely hat prance around at the festival.  Eventually she wandered out to meet Falcon and the others with equipment she had purchased for grave robbing.  They left the village walls and wandered through the overgrown mess that was once the graveyard that serviced the then larger town of Nightwick.  Digging up one of the graves, they found the corpse of a young woman who was fairly well preserved but not supernaturally so.  Realizing their error, Falcon staked her heart, cut off her head, and otherwise performed the rituals necessary to destroy a "vampire."  A group of villagers had gathered to watch them in their strange task, and when it was completed Falcon informed them that they had slain a "vampire" and they could all sleep safely.  Rejoicing, the peasants returned to village proper.

The party then set out marching order and set out down the old path to the demon weed choked ruins of Nightwick Abbey.  On the way, Falcon collected a bit since he heard from one of the woodsmen that smoking it would cause one to have strange visions (read: get high).  They made there way to the section of the dungeon where they had previously encountered the group of mites that had given them their current non-human member.  Once there, a large number of mites appeared in the passages behind them.  They sent their mite to negotiate.  He made various gestures at them that seemed to indicate to the two members of the party who understand the mite's strange language that the mite was very unhappy with their treatment of him.

The mites then fled, taking the party's mite retainer with them.  Angered, Falcon shot two arrows into their numbers, killing two.  One of these was the former retainer.  They then continued to explore the nearby chambers.  They were particularly interested in the hall  that the mite who gave them their treasure last session had gone down to find the small purse.  At the end of the hall, which was a dead-end passage, they found a small room containing a strange, gooey substance.  Agnes threw a bit of one of her rations into the goup, at which point a small half-formed head emerged to attempt to bite at it.  This head vaguely resembled the combination of old man and rat that one finds in the faces of the mites.

Their first instinct was to throw flaming oil at it.  This tends to be their solution to most problems.  However, they found that whatever the goop ways, it wasn't flammable.  They then experimented with putting various items in the goop.  Most  were simply rejected by the occasionally undulating mass, but when the placed a small pebble in, it became a mite's finger before being absorbed by the rest of the goop.

At that point they had been dilly dallying long enough for me to roll for a random monster encounter.  Shortly thereafter they heard a sound reminiscent of a cartoon ghost. "OOoooOOoooOOOOOOOOooo."  A sheet phantom dropped from the ceiling on top of Falcon, and then chaos ensued.  By the end of the fight, Falcon (who had at various times freed himself from the creature with the aid of his friends) had its burning carcass on top of his head.

This was their cue to leave, but before going they snagged the two mite corpses from earlier.  Falcon intended to render their fat into candle wax; however, once back in the village he found that mites are primarily filled with a goop similar to that they saw in the chamber and bits of rock and sand.  They expressed some dismay that they had not purchased fireworks from the Froglings, but I'm not really sure where they got the idea that Froglings would have fireworks to begin with.

Overall it was a fun session.  Village stuff takes up an increasingly larger portion of the session each time, which I think might be bothering at least one player, but he seemed to enjoy himself despite that.

Next week, I hope to have one of my players (my wife) write up a session report in order to mix the format up a bit.
Posted by Evan at 2:33 PM